Which Christmas tree is better for the environment – real or artificial? 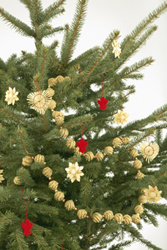 The debate over rather the use of a real tree or an artificial tree is better for the environment continues, especially as the Holiday season nears. Real tree growers point out that their product is renewable, each species has its own characteristic odor, consumes carbon dioxide and gives off oxygen, can be recycled, provides wildlife habitat and creates jobs in rural America. Artificial trees contain non biodegradable plastics and possible metal toxins such as lead. Most artificial trees are made in China and must be shipped long distances to the United States. On the other hand the artificial tree industry points out that their product can be reused and thus saves several real trees from being harvested. The industry goes on to claim that their trees do not need fertilizers or pesticides and do not create a mess or hassle. These are just examples of claims being made by two distinctly different industries. Considering the entire production cycle for real and artificial trees, it is difficult to determine which type of tree is best for the environment, based on scientific based data. Conducting a “Life Cycle Assessment” (LCA) for real and artificial trees would be one approach to answer this question.

Real Christmas trees, like all green plants, consume carbon dioxide and produce oxygen. The carbon dioxide is absorbed through the leaves or needles, combined with sunshine and water to make food and release oxygen. This process is called photosynthesis. The “carbon” is stored in the wood, needles, and leaves and constitutes about one-half of the dry weight. If the trees are burned or otherwise decomposed the “stored” or sequestered carbon is released back into the atmosphere. Other existing or planted trees absorb the carbon making trees carbon neutral. Some of the carbon is also stored in the soil. Growing trees also require some carbon dioxide back into the atmosphere.

Carbon dioxide is important because it traps heat from the earth’s surface. This is often referred to as the “greenhouse effect”. The amount of carbon dioxide in the atmosphere has been increasing since the late 1800’s and scientific data shows a particularly significant increase since the 1960’s. “Global warming” is the term being used to describe an increase in the world’s average surface temperature as a result of more heat being trapped.

“Cradle to Grave” or “Life Cycle Assessments” are used to summarize all of the positive and negative activities associated with developing a product and delivering it to the consumer. LCA’s become complicated, costly and the results are dependent on exactly which set or sets of circumstances are considered. Only one documented study on real and artificial trees is available. A Canadian Environmental consulting firm, Ellipsos has completed a LCA for both real and artificial trees. (Ellipsos/Strategists in Sustainable Development)

In this study, the carbon balance for an individual 7 foot high real Christmas tree was about +24 Kg (53 lbs) of CARBON DIOXIDE after all factors such as labor, use of machinery, transportation, and other inputs are considered. The tree was grown south of Montreal, Canada. It was assumed that the tree was grown in the nursery for four years and in the field for 11 years. In Indiana, two year old nursery stock and about 7 years in the field to produce a 7 foot tree are more typical and would probably result in less carbon being released. The “+” indicates that the overall process of growing a tree is carbon positive (i.e. carbon is released).

The carbon balance for a similar six foot artificial tree was about +48Kg (106 lbs) of CARBON DIOXIDE or twice that of the real tree. Most of the positive carbon release in this case is due to the manufacturing of the tree and transportation of the tree by boat from China to Vancouver and then by train to Montreal, Canada.

For comparison purposes, the average American car emits about 1.5 tons or 3000 pounds of carbon into the atmosphere on a yearly basis. (Green Car Congress)

The Ellipsos report assumed that the real tree would be burned for fuel at the end of the life cycle, thus releasing all of the stored carbon in the tree. If the real tree is recycled for mulch or fish habitat or other uses the carbon budget would be closer to zero at least until the tree finally decomposes. The study goes on to conclude that considering climate change impact along with environmental and public health impact, real trees appear to be a better choice for a responsible customer and that artificial trees must be displayed for more than 20 years in order for it to compare favorably with the real Christmas tree.

The assessment method used for the life cycle analysis groups problems into four damage oriented impacts areas on the environment. These are 1) climate change, 2) human health, 3) ecosystem quality, and 4) resource depletion. The results for the Ellipsos report are interesting. Considering climate change, the real tree has much less impact due to a smaller amount of carbon being released into the atmosphere as discussed above. The LCA also considers the products impact on human health, ecosystem quality and resource depletion. Considering human health, the artificial tree is a slightly better choice than the real tree. Considering ecosystem quality, the artificial tree is a better choice. This is likely due to the use of land for plantations and associated cultural practices (fertilizer, pesticide, irrigation) for real trees. In regards to bothclimate change (global warming) and resource depletion (use of non-renewable energy and mineral extraction), the real tree is a better choice than the artificial tree. The Ellipsos report titled “Comparative life Cycle Assessment (LCA) of Artificial vs Natural Christmas trees” can be viewed by Googling “Ellipsos report 1043-RF3-09.”

For more information about Christmas trees or to locate a choose-and-cut tree farm near you, please visit the National Christmas Tree Growers Association.

One thought on “Which Christmas tree is better for the environment – real or artificial?”