Description of Bovine Tuberculosis:
Bovine tuberculosis (bovine Tb) is a disease found in mammals caused by the bacteria Mycobacterium bovis (M. bovis). In North America, bovine Tb is most commonly found in domestic cattle and captive and wild cervids (white-tailed deer, elk, etc.) and less commonly in other mammals such as raccoon, opossums, coyotes, and wild boars.

Cattle, captive cervids, and wild white-tailed deer are considered reservoir hosts for bovine Tb. A reservoir host is a species in which bovine Tb can persist and be transmitted among individuals within a species or be transmitted to another species. Wild white-tailed deer may pose the greatest threat to the establishment of bovine Tb on the landscape because they move freely across the landscape and may contact multiple domestic cattle herds.

Is bovine Tb transmissible to humans?
Yes, bovine Tb is transmissible to humans but bovine Tb accounts for <2% of tuberculosis cases in the United States. Most cases of bovine Tb in humans are caused by consuming unpasteurized dairy products and the likelihood of contracting bovine Tb from a wild deer is minuscule. There has been only one confirmed case of transmission of bovine Tb to a human from an infected white-tailed deer. In that case, bovine Tb was thought to be transmitted via bodily fluids from the infected deer contacting an open wound on the person during the field dressing process. 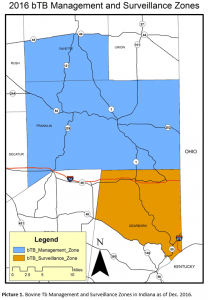 Picture 1. Bovine Tb Management and Surveillance Zones in Indiana as of Dec. 2016.

What other states have had bovine Tb in wild deer?
Both Michigan and Minnesota have had outbreaks of bovine Tb in wild white-tailed deer. Currently, bovine Tb occurs in less than 2% of deer in the Bovine Tb Management Zone in Michigan and has not been detected since 2009 in a wild deer in Minnesota. There are certainly lessons to be learned from both states and those lessons are being incorporated in the management of bovine Tb in Indiana.
Why is bovine Tb an important issue in wild deer?
Human health is the main concern; given that bovine Tb is transmissible to humans. Additionally, bovine Tb is not a naturally occurring disease in white-tailed deer. Deer can also be a reservoir for bovine Tb potentially transmitting bovine Tb to uninfected deer and also to uninfected cattle through direct contact or through shared feeding. Because deer are free-ranging they have the potential to contact multiple cattle herds and transmit bovine Tb across the landscape. If bovine Tb is maintained in the wild deer herd, Indiana is at risk of losing the “Bovine Tuberculosis-Free” accreditation from the USDA, which has negative economic impacts for the cattle industry in Indiana.
How can deer contract and transmit bovine Tb?
An animal infected with bovine Tb can shed the M. bovis bacteria through repertory secretions, feces, urine, or unpasteurized milk. Under the right environmental conditions, the bacteria can remain viable in the environment for months. The disease is spread when an uninfected animal comes into direct contact with secretions of an infected animal or indirectly through an M. bovis contaminated source in the environment (e.g. feed pile). Deer can contract bovine Tb through direct contact with an infected animal, either another deer or cattle or through sharing feeding with an infected animal at wildlife supplemental feeding piles or areas where cattle are fed or cattle feed is stored. Deer can transmit bovine Tb in the same ways as contracting the disease. Indirect contact, by means of shared feeding, is believed to be the primary pathway between deer and cattle.
What management steps have other states taken to reduce or eliminate bovine Tb in wild deer?
Both Michigan and Minnesota have followed the same general approach to eradicating bovine Tb. Their approach consisted of (1) reducing deer density in the bovine Tb management zone, (2) eliminating baiting and supplemental feeding of wildlife, and (3) continual monitoring for bovine Tb in wild deer.
What management steps are being taken in Indiana to eliminate bovine Tb in wild deer?
The Indiana Department of Natural Resources (IDNR) and Indiana Board of Animal Health (BOAH) are considering similar steps as in Michigan and Minnesota to eliminate bovine Tb in wild deer in Indiana. First, a bovine Tb Management Zone has been established in Franklin County and southern Fayette County and a Bovine Tb Surveillance Zone has been established in Dearborn County (Picture 1). In the management and surveillance zones, the IDNR sampled >2,000 hunter harvested deer during the 2016 deer season – none of which tested positive for bovine Tb. As a result, the IDNR determined active population reduction through sharp shooting (as used in other states) is not warranted at this time. The IDNR is still allowing landowners in the management zone to request disease permit to control deer near cattle farms in an effort to reduce cattle and deer interactions. Also, feeding deer or any wildlife is banned in the management zone. Management and surveillance will continue into the future. More information on the management of bovine Tb in Indiana can be found on the Indiana Department of Natural Resources (IDNR)-Bovine Tb Surveillance and Management and the Indiana State Board of Animal Health (BOAH)-Bovine  Tuberculosis.
Why is reducing deer density important to eliminate bovine Tb?
Reducing deer density is important to eliminate bovine Tb because the disease is density-dependent and spreads more efficiently in areas with high deer densities. In densely populated areas, deer come into contact with other wild deer, captive cervids, and cattle herds more frequently, thus potentially spreading bovine Tb to uninfected animals. The purpose of deer reductions is to reduce the risk of transmission by reducing population density, removing diseased deer, and to estimate the percentage of the population with bovine Tb.
Why is banning supplemental feed important to stop the spread of bovine Tb?
One of the primary routes in which bovine Tb can be spread is through shared feeding. This is because supplemental feeding artificially concentrates deer in a very small area increasing contact among deer and other wildlife species. Additionally, M. bovis can survive for months on a supplemental feed pile. Thus, banning supplemental feeding is a critical step to limit the contact of infected and uninfected animals.
Are there any treatments for bovine Tb in wild deer?
To date, there are no effective treatments for bovine Tb in wild white-tailed deer. This is why practices such as deer density reduction, a ban on supplemental feeding, and continued surveillance are vital in combating bovine Tb in wild deer. 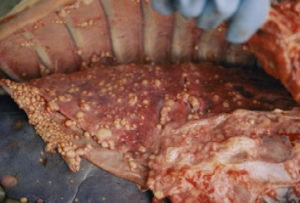 Picture 2. Lesions from bovine Tb infection in the chest cavity of a wild white-tailed deer. Photo by the Michigan Department of Natural Resources.

How do I know if a deer I kill has bovine Tb?
The clinical signs of bovine Tb recognizable to hunters would be small to large white, tan, or yellow lesions on the lungs, rib cage, or in the chest cavity (Picture 2). However, in Michigan only 64% of deer exhibited lesions and only 42% would have been recognizable to hunters. If you harvest a deer in the bovine Tb management or surveillance zone, you should submit it for sampling. After submitting you can search for the bovine Tb test results of your submission by going to the Indiana Department of Natural Resources – IDNR’s bovine Tb management website and clicking the “Look up the results of a deer you submitted” link.
How do I submit a sample if I harvest a deer in the Bovine Tb Management or Surveillance Zone?
Check the IDNR’s Bovine Tb website for information on submitting harvested deer for sampling.
Can I eat venison from deer harvested in the Bovine Tb Management or Surveillance Zone?
Venison from deer harvested within the Bovine Tb Management and Surveillance Zone should be cooked to an internal temperature of 165 degrees Fahrenheit to kill M. bovis and other bacteria. Bovine Tb is rarely present on muscle tissue (meat) and the most likely way bovine Tb would be on meat would be through contamination from secretions within the body cavity.
What steps can I take to reduce the risk of contracting bovine Tb?
Bovine Tb may be transmitted through bodily secretions of an infected deer contacting an exposed wound on a person during the field dressing process. If lesions consistent with bovine Tb are found inside a harvested deer you should contact the IDNR and submit the deer for testing. It’s important to mention that the likelihood of contracting bovine Tb from wild deer is very rare, but there are some steps you can take to further minimize the risk.*Always wear gloves when field dressing, skinning, and processing a deer because bovine Tb may be present in fluids from the internal body cavity.
* Make sure to clean knives that are used for field dressing thoroughly prior to using them to skin or process a deer, or use different knives for each step.
* Thoroughly wash your hands after field dressing, skinning, and processing deer.
* Cook all venison to an internal temperature of 165 degrees Fahrenheit.
I own cattle in the bovine Tb area, what should I do to reduce the risk of bovine Tb from wild deer?
Cattle operators in the Bovine Tb Management and Surveillance Area should limit contact between deer and cattle or cattle feed by:* Only feed cattle an amount that can be consumed in one day
* Fence areas where cattle feed is stored
* Store feed away from deer
* Close the end of large plastic bags used to store corn, haylage, or silage and also remove any feed from the ground around the ends of the bag
* Use hunting and additional landowner permits from the IDNR as a management tool to reduce deer density around your farm
If I own land in the bovine Tb area what can I do to help stop the spread of bovine Tb in Indiana?
If you own land in the Bovine Tb Management Zone (Picture 1) you should contact Joe Caudell (812) 334-1137, the Indiana State Deer Biologist, or the Indiana Bovine Tb Hotline at (844) 803-0002.