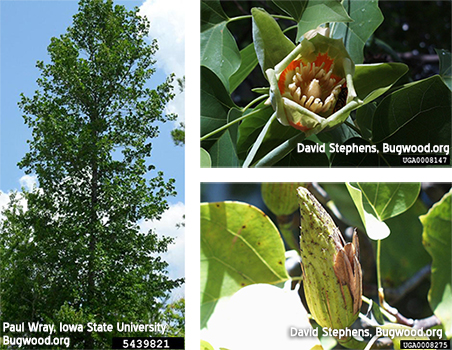 Tulip poplar (Liriodendron tulipifera) is one of the largest trees in Indiana and the eastern portion of the country. Tulip poplar reaching heights in excess of 50-60 m (160-200 ft) with a diameter at breast height (dbh) of 3 m (10 ft) have been reported while the majority of these eastern giants are between 20-30 m (70-100 ft) tall. This tree is fast-growing, has few health problems, and can live upwards of 200 years.

The tree looks best between April and June when it begins to flower as it is covered with large pale green to yellow flowers with an orange band encircling the tepals. These flowers are brimming with nectar and draw in large quantities of bees, birds, and butterflies. The tree has been deemed so magnificent that it is the state tree of Indiana, Kentucky, and Tennessee.

American ginseng (Panax quinquefolius) is an herbaceous perennial member of the ivy family that has traditionally been used in North America by Native Americans for its medicinal properties and cultivated in China for use in herbal remedies. In years past, American ginseng was widespread throughout the eastern United States until overharvesting, habitat fragmentation, urbanization, and deer browsing decimated wild populations.

Though not scientifically proven, ginseng is believed to remedy numerous health conditions such as inflammation, the flu, cancer, insomnia, erectile dysfunction, and hangovers. The herb has become one of the most popular unproven remed 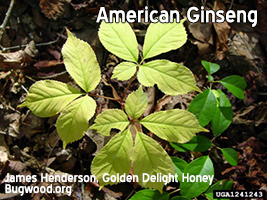 ies in the world.

A new study noted that wild populations of American ginseng could benefit from being planted near tulip poplar. The data stated that new strategies need to be pursued in conservation efforts to save the rare American ginseng plant. The study advised that planting American ginseng on sites equally suited to tulip trees had the potential to increase outplanting success. The authors recommended planting in isolated, mostly closed canopy areas free of disturbances (trespassers, timber harvesting, large deer populations) and against planting in sites with wild sarsaparilla (Lindera benzoin).