Be Sure to Check Out the Extension Pub “Drought? Don’t Forget the Trees!” 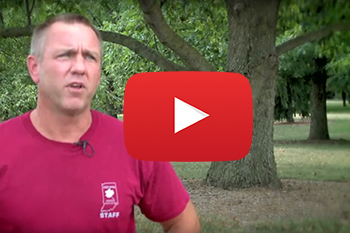 Water is the most limiting ecological resource for a tree, and without adequate moisture, decline and death are imminent. Drought can have a major impact on tree health and survival. It reduces carbohydrate production, significantly lowering energy reserves and production of defense chemicals in the tree.

Trees in a weakened state from drought are more susceptible to pests, which can further weaken the tree, and even kill part or all of it. Although there is nothing we can do to prevent drought, it is important to know what can be done to reduce long-term effects of prolonged dry conditions.

Urban Forestry Specialist Lindsey Purcell describes how homeowners can deal with drought-stressed trees in the short-term and long-term in his publication “Drought? Don’t Forget the Trees!” Purcell also provides insight on the state of Indiana’s drought-stressed trees and how to protect them in the video “Trees in Times of Drought​.”

Keep an Eye on Urban Trees Dying From Weather Stress

Indiana has experienced extreme weather over the last couple of years. Extreme heat, draught, cold, winds, you name it, we’ve dealt with it. Most recently, through June and July, Indiana has experienced record-breaking rainfall and flooding. These weather conditions can make it difficult for our surroundings, but it can also cause a lot of stress on our trees. 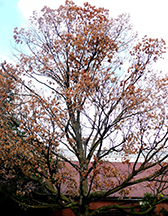 Urban trees are more susceptible to weather-related injury because of their oftentimes compromised root systems. In forested areas, trees spread their roots out two to three times the length of the tree. This is important because roots are the tree’s way to receieve oxygen from the soil. This provides for a healthy defense system, giving the tree advantages like the ability to draw in moisture during dry spells and secrete fungi- and insect-repelling chemicals. In urban areas, roads and construction oftentimes sever roots or restrict where they can go, leaving the trees in a vulnerable state.

Our vulnerable urban trees are especially likely to be harmed by weather-induced stress. Symptoms like browning of leaves, dying branches and early coloration in the fall are all signs that a tree’s health is declining.

Keep an eye on your trees, and if you are concerned, use the Purdue Tree Doctor app​ or submit a sample to the Purdue Plant and Pest Diagnostic Lab as you seek best practices to care and protect your trees.

Question: Can The Mulch Made By Tree Stumps Be Mixed Into The Surrounding Soil For New Plants?

Although fresh chips from tree pruning and removals look great for mulch and compost, there are some hidden issues. First, fresh wood chips can be very acidic (sometimes down around a pH of 4) which can be detrimental to plant growth. Also fresh chips have a high C:N (carbon to nitrogen ratio), and it must borrow nitrogen from the soil to help the decomposing process. So mixing the chips with the soil can actually reduce fertility for a while. Both of those can be problems for plants trying to grow in a bed mulched or mixed with fresh chips. Ideally, the newly ground chips should compost properly for a full year. If nitrogen fertilizer is added to the soil/mulch mix, it can speed up the process.

The effects of wood chips as mulch involve mainly the surface of the soil, which means it’s mainly shallow-rooted plants like perennial and annual flowers that would run into fresh wood chip trouble. This includes serious chlorosis and other health issues involving establishment and development. Deeper-rooted trees and shrubs are less likely to be affected as much; however, they are subject to the effects of the poor C:N ratio. I would suggest removing as much of the chips as possible, piling them for composting and replacing with proper soil for perennial growth unless you can wait for a full year to allow the decomposition cycle to be completed. This may help eliminate issues with new plants going into that location.

Indiana farmers could be in for a warm and wet early spring when they head into the fields to plant their crops, the Indiana State Climate Office says. But they also could expect a return to drought in some parts of the state during the growing season.

Pine beetle infestation increases the summertime temperatures of some Canadian forests by 1 degree Celsius—about the same impact as a forest fire—according to new findings published Sunday (November 25) in Nature Geoscience. The beetle populations, spurred into profusion by global warming, appear to be contributing to a temperature feedback loop, though it remains unclear how much the insects may affect weather patterns.

The results reinforce the conclusion that ecological disturbances like beetle infestations can have significant ecological impacts, said Allan Carroll, an insect ecologist at the University of British Columbia who did not participate in the research. “We have until very recently considered biotic disturbances a bit player [in climate change],” noted Carroll, who collaborated on a recent study showing that pine beetle outbreaks transform forests from carbon sinks into large carbon emitters. The current study confirms that pine beetles can have massive effects that set up “an uncomfortable feedback” wherein warming temperatures encourage more beetle damage, which in turn influences warming, Carroll noted.

​Increased temperatures from climate change have been expected to speed decomposition of plant materials and the return of nitrogen to soils, making the soil more fertile for plants. But Jeff Dukes, an associate professor of forestry and natural resources at Purdue, found that the microbes responsible for returning nitrogen to soils react differently to a range of climate scenarios.

“More nitrogen being available is not something we can count on in all ecosystems,” said Dukes, whose findings were published in the journal Global Change Biology.

Fall And Winter Weather Outlook In Indiana: Something For Everyone?

​Now that the dreadfully hot and dry summer is behind us, we might be wondering what to expect for the fall and coming winter in Indiana.

A variable temperature and precipitation pattern is developing this fall with September so far a cool and wet month. Indiana average temperatures have run nearly two degrees below normal while precipitation has ranged from near normal in the northern third of the state to more than twice normal in central counties, according to the Indiana State Climate Office based at Purdue University.