Frost seeding is a great way to establish native grasses and forbs for soil and water conservation and to create habitat for various wildlife and pollinators. You can use multiple tools for frost seeding, such as a tractor or ATV and broadcast spreader or a hand “whirlybird” seed spreader. But one innovative way to broadcast the seed is with a drone – or Unmanned Aerial Vehicle (UAV).

A drone is the tool we used to frost seed native grasses and forbs as part of a project on the Ivy Tech Community College-Lafayette Campus. 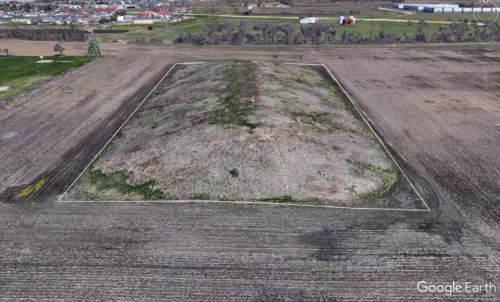 Faculty and staff within the Agriculture Program at Ivy Tech Community College received a grant from the Wabash River Enhancement Corporation (WREC) to plant native grasses and forbs on their property for educational and demonstration opportunities.

We planted a 4-acre mound created from soil leftover after digging a nearby retention pond. The topography and slopes of the mound made using traditional planting equipment like a tractor and no-till drill a challenge. And since the Ivy Tech staff was already familiar with using drones to plant cover crops, they decided it would be the best option to seed the mound. 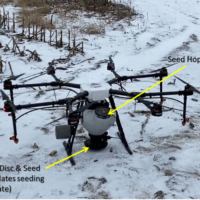 Purdue Extension and Purdue Forestry and Natural Resources assisted in the project by supplying, calibrating, and flying the drone, sharing previous experiences with frost seeding native grasses and forbs, and adjusting the seed mix by adding a carrier to improve seed flow through the drone seed spreader.

The Drone Set-up
We used a DJI Agras MG-1P drone fitted with a seed hopper that could be filled with up to 22 pounds of seed. Once filled, the drone spreads the seed at a specific rate (pounds per acre) by flying a consistent speed and height across the field along a predetermined path. A hand-held controller allows you to change the drone’s flight path, speed, and height. The controller also allows you to turn the broadcast spreader on or off, adjust the seed gate opening (% open), and the revolutions/minute of the disc to change the rate of the spreader.

The Process
Mixing the seed
The first step was to ensure the seed would flow through the seed hopper. This drone is set up to spread cover crops, which are usually large, heavy seeds like cereal rye or smaller (but still relatively heavy) seeds like clovers.

Native grasses and forbs are often much smaller and lower in weight by volume than cover crops. The grasses are also “fluffy” or have extra seed parts (chaff or awns), making them prone to clogging. These qualities of native grasses and forbs can present a challenge when trying to broadcast them without specialized equipment. We often add a carrier, like pelletized lime, to add more weight to the seed mix and allow the seed to flow more easily through the spreader. We added 40 pounds of pelletized lime per acre to the seed mix.

Check out this video for more information about frost seeding and calibrating a broadcast spreader.

Creating the map and programming the drone
After finishing the calibration, we went to the field to create the map for the project and program the drone. The initial step with the drone is to create a boundary layer in the mapping software. We did this by physically taking the controller to the four corners of the mound and setting a GPS point. When the accuracy showed 5 feet or less, we dropped a pin and used that as a corner. Once the corners were marked, the mapping software created the boundaries of the mound and created an automated path for the drone to fly.

Once we completed the map, we filled the drone with seed and set the flight parameters. Our calibration figures showed that we needed a 90% hopper opening with a speed of 2 mph, and we had a swath width of 18 feet from 10 feet above the ground (drone height). The disc speed was set to 900 revolutions per minute.

The Challenges
Fluffy seeds and seed flow
One of the biggest challenges we encountered was the flow of the native grass seed through the seed hopper. The seed was too fluffy (not enough weight per volume) to flow correctly through the seed hopper. The seed would flow and spread correctly for a few minutes, then the seed would get clogged, and the drone would stop. Because the fluffy seed was getting stuck at the top of the hopper and not flowing correctly, the sensor on the drone’s seed hopper was telling us the seed hopper was empty. However, at least 5-10 pounds of seed was still in the hopper. This would cause the drone to fly back to be refilled. Each time this happened, it cost us time and battery life on the drone.

We were able to free the seed in the hopper and get it to flow correctly by rocking the drone or flying the drone back and forth quickly until the seed worked itself loose. If you were using traditional equipment like a tractor and fertilizer spreader, the bouncing of the tractor over rough terrain would have naturally agitated the seed and allowed it to flow. But, with a drone flying in the air, the seed was not agitated. We would have needed to add more carrier to the seed mix to increase its weight and improve the seed flow.

Broadcast spreaders designed to spread fluffy seeds like native grasses often have an agitator in the hopper to stop the seed from clogging and improve seed flow. The native grass seed would have flowed better through a drone seed spreader explicitly designed for this type of seed, like this aerial spreader.

It was helpful that we had six batteries. This allowed us to rotate between using batteries and charging them and meant we didn’t have to stop spreading to wait on batteries to be charged.

Flight speed
Because we added extra weight to the seed mix by using a carrier, we needed to fly the drone at a slow speed to spread at the correct rate per acre. Keeping the drone at a lower speed (2 mph) was challenging. Often the drone flew at around 3 mph. This is likely due to the physical properties of the electric motors turning the propellers to keep the drone aloft.

Drone malfunction
Another challenge we faced was a malfunction on the UAV where the spreader gate was opening and closing on its own, or not opening at all, and had an error showing on the controller screen that the gate was blocked. We noticed this error and worked on the UAV during the calibration phase and thought it was repaired. We had to stop and take the spreader apart again to identify the problem.

On the day we seeded, we finally decided to open the hopper to 90% opening and physically stop the gears from opening and closing. This left the hopper open constantly, but we could still turn the spreader on and off. After finishing the seeding, we determined the issue was either a faulty servo motor or control board. These parts are inexpensive and can be replaced, but they are specialized parts that require ordering and cannot be picked up from a local hardware store.

Cost of the drone 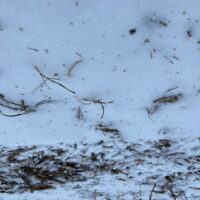 The DJI Agras MG-1P is an older model (older, not outdated), so the cost has decreased. Initially this model cost around $19,000, but it is now about $8,000. This includes both attachments for spraying and spreading. Additional batteries are around $700 each. Cost for the newer models of this type of drone range from $18,000 to ~$30,000, depending on the size and payload.

The Results
Despite the challenges we faced, the drone worked well for spreading the native grass and forb seed for this project. We applied the correct amount of seed required for the area. When the seed flowed correctly, it was spread evenly on the site. However, we will need to come back to the site during the next few summers to see how well native grasses and forbs are established.

A drone may not be effective for large-scale conservation plantings because of the time and batteries required, the small hopper size, and the need to refill the seed hopper. But for smaller plantings or those plantings in areas inaccessible by traditional equipment (in wetlands, on steep slopes, woodlands, etc.), drones could be an effective tool to establish native grasses and forbs.