Posted on June 7th, 2017 in Forests and Street Trees, Urban Forestry | No Comments » 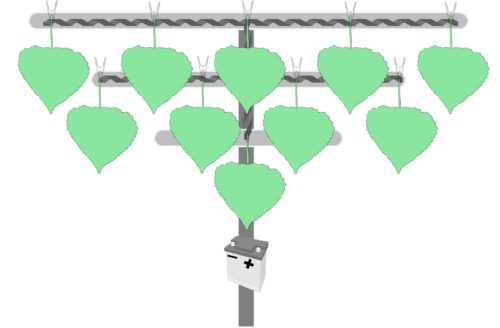 Money doesn’t grow on trees, or so the saying goes. I don’t believe those folks were talking about the cotton and linen currency of today when that phrase was first uttered. Since that period of history, many parents have edited the statement to include: shoes, clothes, toys, and a host of other items that ‘don’t grow on trees’. In the past my mother told me repeatedly that electricity didn’t grow on trees and until this past January, she was correct. Now, things have changed.

Researchers at Iowa State have designed a device that not only mimics the way tree leaves sway in the wind but generates electricity when in happens. Not meant to replace wind turbines, these inconspicuous machines are much smaller and more compact while turning wind energy into electricity. Because of their smaller footprint, these biometric (use of artificial means to mimic natural processes) trees could, with further development, be the start of a new market in electric generation.

At present the prototype resembles a wire antenna from which plastic leaves dangle that allows them all to be connected to a storage battery. Leaves on the prototype are clear but have been depicted here as green for easier viewing. The Iowa scientists envision that a scaled up model, with tens of thousands of leaves all producing electricity, would allow for a considerable amount of off-grid energy harvesting. Ensuring uncompromised efficiency remains a primary goal of the group.

The device ‘leaves’ were modeled after cottonwood (Populus deltoides) trees because the petioles (leaf stalks) are flat thus allowing the leaves greater movement in the wind. Inside the leaf stalks of the device are specialized plastic strips that release a charge when flexed. The regular fluttering of the leaves maximizes this piezoelectric effect in the model.

Future uses for such technology are variable from powering household electric devices (i.e. a tree-powered vacuum cleaner or coffee maker) to charging various modes of transportation. However, as with most new technology, efficiency remains a challenge and must be maximized to be competitive in the marketplace. New approaches are required before biometric trees and similar devices are ready to be marketed to the public. This research has already influenced new design approaches in computer science, manufacturing, and nanotechnology.

Additional Resources:
What is a GMO? Making Trees Stronger, Podcast, Got Nature?, Purdue Extension-FNR
Purdue’s BioWall Project Aims For Cleaner Indoor Air, Got Nature?
Do Trees Sleep?, Got Nature?
Gardens by the Bay: Supertrees of Singapore Light up the Night Sky , Dailymail.com