Secondary poisoning from bromethalin toxicants for moles – should you be concerned?

Recently during an online program (video) I received a question about the risk of using toxicants for controlling moles in lawns. Specifically, the question was if animals (pets or wild animals) ate the moles that consumed the bromethalin “worms” or “grubs” would that harm them. I decided to do some digging (no pun intended) for more information so people can make informed decisions regarding their use.

What is bromethalin?
From the Purdue University Animal Disease and Diagnostic Laboratory:
“Bromethalin was developed and released in 1985 to combat a world-wide problem of rodent resistance to warfarin-like anticoagulant rodenticides. Bromethalin is not an anticoagulant but is a highly potent rodenticide that provides a lethal dose to rodents in a single feeding. Death occurs within 24 to 36 hours after ingestion. It is a pale, odorless, crystalline solid compound in the diphenylamine family. Its mechanism of action is to uncouple oxidativephosphorylation in the mitochondria of the central nervous system. This leads to a decreased production of ATP. Low levels of ATP inhibit the activity of the Na/K ATPase and lead to a subsequent buildup of cerebral spinal fluid and vacuolization of myelin. The increased CSF results in high intracranial pressure, causing damage to nerve axons, inhibiting neural transmission and leading to paralysis, convulsions and death. Signs of a sub-lethal dose include hind limb ataxia, depression, extensor rigidity, opisthotonus, lateral recumbency and vomiting. High doses may bring about severe muscle fasciculations, hind limb hyper-reflexia, seizures, hyperthennia, depression and death.”

From the Merk Veterinary Manual:
“Bromethalin, a nonanticoagulant, single-dose rodenticide, is a neurotoxin available as bars (blocks), pellets, seed, and worm. Mole baits are sold as worm containing 0.025% bromethalin, whereas rat and mouse baits contain 0.01% bromethalin. Bromethalin and its main metabolite desmobromethalin are strong uncouplers of oxidative phosphorylation. This results in intra-myelin fluid accumulation, leading to long nerve demyelination and intra-myelin cerebral edema. The net result is cerebral and spinal edema and increased CSF pressure, leading to neurologic dysfunction. In toxicity trials, the oral toxic dose of bromethalin when used as part of bait appears to be much lower than the dose administered as a technical grade agent. For example, in dogs, an average lethal dose of technical grade bromethalin is reported to be 4.7 mg/kg but 2.38 mg/kg in bait. Young dogs (<1 yr old) appear more sensitive; death has been reported at dosages of ~1 mg/kg in bait. Dogs are more commonly involved. Cats are 2–3 times more sensitive than dogs.” 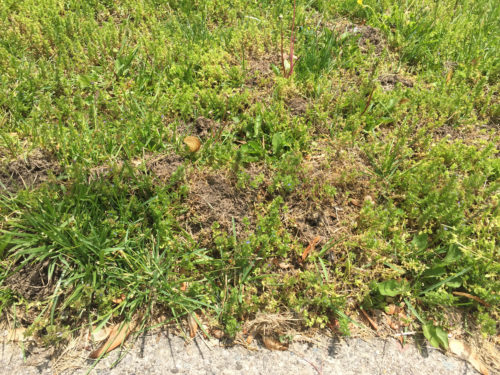 What is the risk with mole baits?
The level of risk of any pesticide depends on a combination of toxicity and exposure. Anytime you are considering using a toxicant or other pesticide, first read the label in its entirety. Labels will contain information on how to apply a product safely, under what circumstances, and any precautions you should take. However, labels also contain other information that can users determine if they should use a product. This information is key in preventing pesticide exposure to people and the environment. In fact the label is a legal document. The pesticide user is bound by law to follow all label directions. Label directions for mole baits instruct users to keep pets out of treated areas and not to use the product above ground. Bait must be applied directly into moles’ tunnel systems. Following these directions will greatly reduce, or even eliminate, the exposure risk to pets. What might be the consequences if your dog or a neighbor’s dog mistakenly entered your yard and went digging around in a treated area?

To determine this we can calculate how much bait a dog would have to consume to reach the average lethal dose. The more technical term is the LD50 dose which is the individual dose that kills 50 percent of a population of test animals. A single worm mole bait weighs approximately 5g since a package of 20 worms has a weight of 100g.  With 0.025% active ingredient, each worm would contain 1.25 mg of bromethalin. Thus, an 11lb (5kg) dog would need to consume 18 to 19 worms to reach the average lethal dose using the 4.7 mg/kg level for technical grade bromethalin, or 9 to 10 worms for the 2.38 mg/kg level in bait. Recall, these rates were listed in the Merk Veterinary Manual. The amount of bait consumption would be more for larger dogs. The average lethal dose is just that – an average. Some dogs would die with lower dosages and some with higher dosages within a specified timeframe.

It would be extremely unlikely that a dog could find, dig up, and consume the number of worms to reach or even approach the average lethal dose. Consider the following:

In the end, it is up to the individual user on whether or not they choose to use toxic baits to get rid of moles in their yard. If you do choose to use them, read the label in its entirety. In the case of mole toxicants, the label clearly states that pets should not be allowed in treated areas. If you are not confident this is possible, then alternative control options are likely a better option for you.