Question: I saw a squirrel with no fur on its neck, both backside and underneath. What is this? 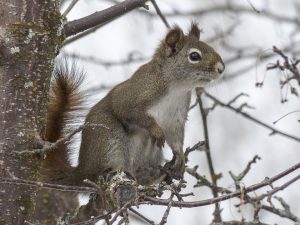 People can be taken aback by the sight of squirrels missing hair. Sightings of partially furred squirrels is not unusual with warmer temperatures experienced through the winter. Like many wildlife issues, the cause of hair loss in squirrels is not easy to answer and often results in more questions than answers. In most situations, hair loss does not impact populations of squirrels. However, individuals may be impacted during winter.

Most people assume, often incorrectly, that hair loss in squirrels is the result of mange, a disease caused by microscopic mites that burrow into the skin and are unseen by the naked eye. Hair loss attributed to the squirrel mange mite, Notoedres douglasi, has been reported in both fox and gray squirrels. Notoedric mange is different from sarcoptic mange. The latter, caused by the mite Sarcoptes scabiei, occurs primarily among red foxes and coyotes. Questions exist regarding the host specificity of mange mites. In light of new evidence, some pathologists now believe that sarcoptic mange mites are not as host-specific as previously thought. However, notoedric mange mites appear to be more host-specific, and don’t colonize non-hosts (like humans), although a few bites may occur. Transmission of notoedric mange to species other than squirrels has not been documented, including to canine and feline pets.

Symptoms of notoedric mange in squirrels includes loss of hair and dry, thickened and dark skin. Crust does not form on the skin in notoedric mange in squirrels like it does in sarcoptic mange in red fox. Mange is most commonly spread by direct animal to animal contact. Treatment of adult squirrels with mange is generally not recommended because reinfection from their nest is likely. An adult squirrel can survive mange if in otherwise good condition. While mange can be fatal to squirrels as a result of exposure during the winter, full recovery is often observed in squirrels.

While mange is commonly presumed to be the culprit, most hair loss in squirrels is caused by a variety of superficial fungal diseases generally termed dermatophytoses. Hair from squirrels infected with fungal agents is typically broken off at the skin, leaving a fine stubble of short hairs. Damp weather is thought to play a role in some fungal outbreaks. This past autumn was relatively wet for Indiana standards and may have contributed to the apparent observed increase of hair loss in squirrels this winter. Most animals will eventually gain an immune response and recover from the fungal infection without any apparent consequences.

Some hair loss in gray and flying squirrels is thought to be an inherited condition where the hair follicles are non-functional or absent, although studies confirming this have not been done. These squirrels have normal, but bare skin.

The next time you see a squirrel with hair loss, don’t become alarmed. In most cases, the hair will return with no apparent ill affects to the squirrel, other than perhaps some embarrassment and name calling among his squirrel friends.

3 thoughts on “Question: I saw a squirrel with no fur on its neck, both backside and underneath. What is this?”