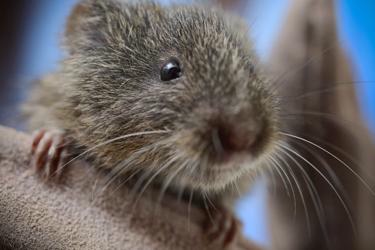 How do a fully sequenced genome, microbiomics, and intensive population genetics help save a critically endangered mammal?

There are only a few hundred Amargosa voles left in the world with an 85% chance of going extinct over the next 10 years if intensive management is not implemented. Voles are rodents related to mice and rats. They are notable for the variety of their breeding systems (some species are monogamous, others promiscuous), their extraordinarily high rate of evolution, their diversity (>60 species), and the fact that many species are indistinguishable to the naked eye. The hoc Amargosa vole team, consisting of federal, state and private organizations, aims to determine the status of and major threats to the Amargosa vole, fundamental aspects of its biology, and how recovery actions can target genetics, disease, habitat factors, demographic problems, and other threats to improve the chances that this species will persist. Here we describe how cutting edge DNA-based techniques can teach us what makes this little mammal so special, what makes it vulnerable, and what we can do to protect it.

Amargosa voles occupy a tiny range in the Mojave Desert where the Amargosa River interrupts its subterranean flows with occasional above-ground stretches and little marshes grow around springs and wells where the ancient carbonate aquifer bubbles to the surface. These marshes are remnants of formerly extensive wetlands that occurred during the Pleistocene 10,000 years ago: as the water receded, the harsh Mojave Desert expanded and now these increasingly isolated marsh oases support endemic species living there and only there, like the Shoshone pupfish and the Amargosa vole. These endemic species have probably evolved to take special advantage of the unique conditions they find in their desert refuges.

In many ecosystems, rodents serve a huge role in harvesting plants for food and serving as a primary diet source for a plethora of predators. In the Mojave, where Amargosa voles live, the only known food source for this subspecies of California vole is three-square bulrush, but remarkably, the nutritional value of this plant is almost negligible. UC Davis specialist in rodent nutrition, Jon Ramsey, remarks that no animal he is aware of can survive with such a meager diet and indeed, nutritional analysis of bulrush tissues reveals that it offers even less nutrition as a sole source diet than bamboo (the famously minimalist diet of the giant panda). In order to survive, the Amargosa vole must utilize a community of microbes it hosts in its gut to access every single nutrient bulrush has to offer, and this is where the story gets a bit more complicated. Although Amargosa voles are reared in a captive breeding facility for safekeeping at UC Davis, changes in their diet could significantly change their gut microbial community, and thus researchers are using next generation sequencing to describe the entire community of gut bacteria, including pathogens, bacteria that can ferment and help make bulrush a useable food, and other miscellaneous bacteria. This approach will help ensure voles can make a transition from colony food to that which they evolved to use in the wild marshes of the Mojave. Study of the vole-bulrush-microbial community can also shed light on how animals in harsh environments with very marginal nutrition can survive, and even how to help protect species during climate change which can alter water availability in the marsh, bulrush health, and vole survival.

Additionally, Conroy, Rosenblum, and Krohn at UC Berkeley are using modern molecular approaches to understand vole population structure, which is necessary to guide captive breeding, protect rapidly diminishing natural genetic diversity, and guide habitat work that could help voles with rare genotypes effectively reproduce and keep those special genes in the larger gene pool. The team at Berkeley is turning to a genome-wide approach called RadSeq to ferret out subtle genetic differences among individual voles. This approach can help the team ensure that new founders are brought to the colony at the right time, from the right place and that translocation of voles among marshes helps support what little genetic variation is left. Genomics tools can even shed light on where the Amargosa vole originated – are its closest relatives voles in southern California and Baja California or are they the voles that flourish in coast range meadows up into northern California?

A common shortcoming many teams working with population genetics have to face is that conventional genetic markers don’t necessarily tell us what the genes of the vole do. In order to find genes for disease resistance, their characteristic large body and distinct skull shape, their atypically docile behavior, their apparent high requirement for free water—or any heritable trait defining Amargosa voles and helping them survive—the group worked to produce a complete genetic map of the entire genome of an Amargosa vole individual at Purdue University. This genetic map, revealing thousands of genes of the vole as well as intergenic, possibly regulatory DNA, will serve as a starting place for genetic studies to better understand and support the recovery of this endangered species.

As endangered species recovery programs holistically integrate modern genetic techniques, captive breeding, habitat management, epidemiology, and ecology, there will be increasing need for tools such as these we are providing for Amargosa vole conservation. We hope these tools can help improve the odds of recovery for this one species and that sharing our findings will contribute to the recovery of other species as well.

Janet Foley, Professor and Researcher of Medicine and Epidemiology
University of California, Davis