​Bald Eagle Breeding Season Is Upon Us 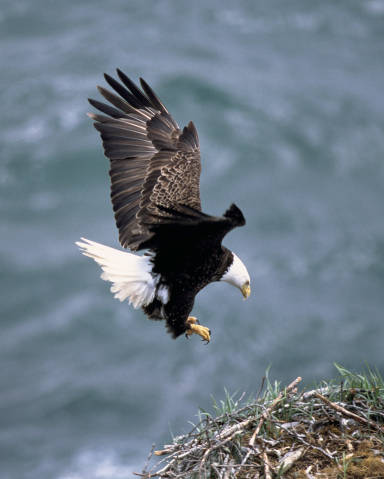 While most of us think of spring as the bird breeding season, several species get a jump start during the winter. Bald Eagles are one of those species. Winter is a time when Bald Eagles build nests in large trees or snags near sources of food – rivers, streams and lakes. The nests they construct are very large (4-6 feet in diameter) and can weigh more than 1,000 pounds. They also construct alternate nests within their territory and will usually return to the same nesting territory year after year.Bald Eagles were once listed under the Endangered Species Act. However, their populations recovered to a level where they were delisted. Even so, Bald Eagles are still offered some level of protection under the Bald and Golden Eagle Protection Act and Migratory Bird Treaty Act. Almost all birds in Indiana and the U.S. are protected under the MBTA. In fact, under the MBTA, it is unlawful to “take, possess, transport, sell, purchase, barter or offer for sale any migratory bird or the parts, nests or eggs of such bird.” The MBTA also protects nests from destruction while they have eggs or dependent young (i.e., prior to fledging).

For Bald Eagles, I think most people know you can’t directly harm them. But I do receive questions about what activities can be done around Bald Eagles and especially their nests – Bald Eagles are quick to abandon a nest in the presence of disturbance. The MBTA provides protection from harming an eagle or a nest with eggs or young. The Bald and Golden Eagle Protection Act provides additional protection during the breeding season as well as the nest.

According to the Bald and Golden Eagle Protection Act, it is unlawful to disturb eagles during the breeding season. In this case,

To minimize the risk of disturbing eagles, the guidelines suggest a buffer between a nest and the activity, but it depends on the category activity, according to the guidelines. For example, Timber Operations and Forestry Practices list a distance of 330 feet from the nest at any time. They suggest avoiding harvesting operations within 660 feet of the nest during the breeding season.

The management guidelines are downloadable from the link provided below in the Resources. If you have questions about Bald Eagles and their protection, contact the U.S. Fish and Wildlife Service at their Bloomington Field Office.