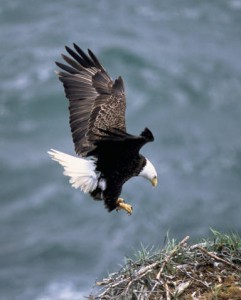 The recovery of the bald eagle is one of the greatest conservation success stories in Indiana. Habitat loss, the hat-making trade, and persecution once caused dramatic declines in eagle numbers, leading to the last eagle nest being found in Indiana in 1897. Nationwide, bald eagle populations continued to decline throughout the 1950s and 60s because pesticides, like DDT, interfered with their ability to reproduce.

A combination of legislative changes and conservation efforts put bald eagles on the road to recovery. The U.S. Congress passed the Bald Eagle Protection Act in 1940 to prevent the killing of bald eagles. DDT was banned nationwide in 1972. In 1973, bald eagles were one of the first species listed as federally endangered under the Endangered Species Act. State agencies began restoration efforts to meet conservation goals for eagles as a result of this listing.

Indiana DNR reintroduced bald eagles to the state from 1985–1989. During this time, 73 eaglets from Wisconsin and Alaska were raised and released at Monroe Lake to restore a breeding population in Indiana. The first successful nesting occurred in 1991.

By 2007, the U.S. national symbol was declared recovered and removed from the federal endangered species list. Indiana followed suit in 2008, upgrading the bald eagle from a state-endangered species to a species of special concern after reaching a goal of 50 nesting pairs. This was a significant achievement—no eagles were known to have nested in the state from around 1900–1988.

In just 35 years, the bald eagle went from extirpated in Indiana to a thriving population statewide. This year, biologists estimated Indiana supported about 300 nesting pairs across 84 counties. In the last five years, at least one bald eagle nest has been documented in 88 of Indiana’s 92 counties. Chick production was also up by 11% from 2019 to 2020.

You can donate to this fund online.

Although bald eagles are no longer listed as an endangered species, they remain protected by other state and federal laws, including the Bald and Golden Eagle Protection Act. If you see bald eagles in Indiana, observe the birds, their nests, and roosts from a distance of 330 feet, which is roughly the length of a football field. Photography enthusiasts should take photos of eagles with a telephoto lens instead of getting close to them. All should foster a climate of respect for wildlife by sharing these guidelines with friends.

To subscribe for the monthly newsletter view: MyDNR Email Newsletter.