Urban Coyotes – Should You Be Concerned? 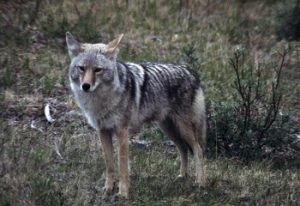 In acknowledging National Wildlife Week, #nationalwildlifeweek, it seems fitting to place this post regarding several concerned questions that we receive on coyotes. As Spring is just around the corner many urban residents are getting ready for the return of many birds, mammals and amphibians. While folks are quick to recognize the call of spring peepers, or the song of robins, they are surprised to know other types of critters can call their backyard home, or at least visit on occasion. One animal that is getting a lot more attention in recent years is the coyote.

Coyotes are actually native to Indiana, although their historical distribution is much smaller in the state than it is today. Their range expansion is simply the result of their adaptability. Things we have done to the broader landscape combined with less competing animals has opened up new resources to coyotes. You may tend to think that urban landscapes offer little for wildlife species and don’t offer the quality of rural or more “natural” areas. Perhaps surprising to many, urban environments can often support larger densities of wildlife presumably because of increased food resources and lower trapping or hunting pressure. For coyotes, studies have shown that urban coyotes tend to focus activities in natural habitats within the urban landscape. They will still use more well-developed areas and the extent of which varies among animals; however, coyotes will often shift their behavior to avoid human activity.

Coyotes are considered to be a nuisance or even a safety threat by some. They are probably one of the few animals that homeowners want removed simply by seeing them in their yard. However, these fears are rarely justified. Diet studies of urban coyotes indicate they eat primarily rodents and rabbits. Coyote predation may actually help reduce conflicts with other species of wildlife. As a primary predator of Canada goose nests they may limit population growth in urban environments. Similarly, coyotes may do the same for white-tailed deer populations through fawn predation.

Fear of coyotes is derived largely of perceived threats to pets or people. Coyotes have been documented to attack people, but only rarely. Habituation to humans seems to play a role but it is also unclear how other factors contribute to these attacks. For example, the age or social status of the offending coyote and the intentional feeding by humans preceding the attack may play roles. Moreover, not all attacks are the same. Coyotes may attack out of defense, because of disease (e.g., rabies), or other reasons.

The threat to pets, particularly cats or small dogs, is much more real. Coyotes are known predators of cats. In urban areas, predation of cats is slightly higher than in rural areas, although cats still make up only about one percent or less of their diet according to studies. Cat predation may be ecologically beneficial given the impact free ranging cats have on our native wildlife. Attacks on dogs are less common but do occur and are most frequent during the coyote breeding season, December through February. Small dogs are at most risk but larger breeds may be attacked by a pair or family group.

While these facts on coyote behavior may alarm some, the truth is these are all extremely rare cases. Coyotes are around many of us every day and we aren’t even aware of their presence. Coyotes are native to Indiana and can help control populations of other wildlife species that cause more widespread conflicts and property damage. However, there are a few common-sense steps we can do to avoid conflicts with urban coyotes. The most important is to never intentionally feed coyotes or other animals. They don’t need it. Intentional feeding can contribute to coyote’s habitation to people, which is believed to be a contributing factor to attacks. Some also recommend scaring off coyotes you see in the yard by banging pots and pans or similar actions. However, this may cause a defensive response in some animals and it not advisable.

3 thoughts on “Urban Coyotes – Should You Be Concerned?”