Purdue College of Agriculture News: Timber rattlesnakes are widely distributed across the eastern half of the United States, living as far north as New Hampshire and as far south as Florida. Hilly forests like those found in Brown, Monroe and Morgan County, Indiana suit the secretive lifestyle of the venomous snake. According to Purdue Extension wildlife specialist Brian MacGowan, there is no reliable estimate of the number of Timber rattlesnakes living in Indiana. Sightings are rare but most likely to occur during the hottest parts of the year.

“Late July and August are the peak of their breeding season in Indiana,” said MacGowan. “The males move around a lot more, tracking the scent of the females.” 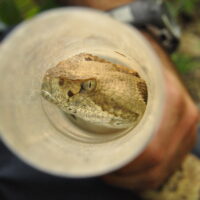 While they are normally hidden among rocks and brush, rattlesnakes have been observed 20 feet high in trees on rare occasion.

“Chipmunks are their primary food source in Indiana, but larger males eat squirrels and similarly-sized prey,” MacGowan explained. “They even consume songbirds.” A typical adult grows to be between three and five feet in length.

Rattlesnakes are patient hunters. Most often they use their natural camouflage to ambush prey. They inject a lethal venom, potentially strong enough to kill a human if left untreated. The venom contains hemotoxic elements, meaning it can damage or destroy blood vessels and cells.

But just because rattlesnakes are venomous does not mean they create frequent problems for nature lovers. “Timber rattlesnakes are reclusive and are quite unaggressive as far as snakes go,” MacGowan explained. “A lot of the locals in the areas I research don’t realize rattlers live nearby since the snakes keep to themselves.” According to the CDC, roughly 7,500 instances of venomous snakebites are recorded a year in the United States. Of those, about 5 are fatal. During his time as part of the Hardwood Ecosystems Experiment, MacGowan realized that even when looking, finding a rattlesnake is not an easy task.

For full article on the rattlesanke please visit: Unexpected Plants and Animals of Indiana: Timber Rattlesnake