Tribune-Star – The Off Season: Among other things, it’s the year of the rabbit

Tribune-Star: Both my son and daughter raised rabbits as members of 4-H, so for years our barn served as a makeshift hutch, complete with wire cages, watering and feeding bowls, and fur — lots of fur, some still sticking to the old building’s dusty rafters all this time later.

My brother and sister and I also grew up with rabbits, although it was through the likes of immortal “Bugs Bunny” features, such as “The Rabbit of Seville” (yes, with Bugs massaging Elmer Fudd’s head to the music of Rossini) 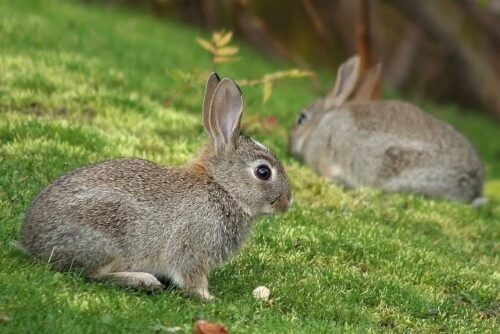 and “14 Karat Rabbit” (featuring a greedy gold mining “Yosemite Sam”). I plan to share those cartoons with my grandsons, and sure hope they have the opportunity to watch them as we did: on a Saturday morning; not fully dressed; with few cares in the world; preferably, a bowl of cereal in hand.

That being said, I have no predisposed dislike of rabbits at all. But this summer has tested my patience as far as the Eastern Cottontail is concerned; they’ve invaded my property in record numbers. I have never seen so many rabbits short of a show at the fairgrounds, not even in my more innocent Warner Brothers days.

They seem to be everywhere: peeking out from beneath my car when I walk out the door; startled from a flower bed or garden when I reach for a weed to pull; nibbling about in our yard as we watch from our windows in the evenings. Some of them hardly even move now when I show up; I honestly think I could get them to eat out of my hand.

I don’t think our infestation approaches what’s happened in Australia. According to a 2020 “National Geographic” article, European rabbits were introduced to the continent in 1859 (I also read 1788 in another story) so they could be hunted; just 13 were originally brought in. By the turn of the century, the rabbits constituted one of the greatest invasive threats any country has ever experienced. They destroyed crops at prodigious rates, caused erosion, and nearly restructured the continent’s biodiversity. Fences, poisons, traps, even the use of rabbit-sensitive pathogens were used to try to control them; it’s estimated — despite doubled-down efforts with new pathogens — that there are over 200 million feral rabbits there now.

In a summer that has already been a bit out of whack, I have lately begun to wonder if it’s just me, or are there others seeing an uptick in rabbit populations too? And, before I take this any further, I’ll say that I am ruling out eliminating our problem with a shotgun, let alone pathogens. Just a few trips decades ago with a hardcore-hunting grandfather ended my ambitions for putting rabbits on our supper table; I tend to live and let live, and, of course, complain.

Not only did the furry little vandals eat all of the swamp milkweed I was growing for our monarch butterflies, they have gnawed off sunflowers — both planted and volunteer — and have, in particular, eaten many of our late-blooming hostas (nearly ready to flower) that must be particularly tender and tasty.

Purdue University Extension Specialist Jarred Brooke says, “I have received reports of abundant rabbits around the state. There are likely several causes for this, but it is hard to pin down the exact causes. Cottontail populations tend to be cyclical … One year the population may be booming, and then the next you might not see many. And it’s really hard to predict when those cycles will occur.”

Brooke says that things like mild winters — which we have luckily had these past few years — allow cottontails to breed earlier and more often, bring on lush green vegetation, and often allow predators to choose from a more varied menu than in summers following harsh winters.

“It’s hard to say exactly what is going on this year, but it sounds like we are in the increasing phase of their cycle, which is normal, “Brooke says. “Adding in the fact that many cottontail predators in some areas had an easy meal this spring with cicadas certainly doesn’t hurt. With that said, I don’t know any research that has linked rabbit populations with cicadas, but cicadas have been linked to population increases in other mammals, turkeys and songbirds.”

Brian McGowan, Certified Wildlife Biologist through Purdue University’s Department of Forestry and Natural Resources, says it’s nearly impossible to tell when we are having a big rabbit year: “Methods like roadkill surveys or bow hunter surveys provide some information, as well as annual harvest; however, these and other methods have a time lag element to them where they are done once a year and the data is not always immediately analyzed.”