Jennifer Koch, and other researchers with the U.S. Forest Service, has spent the last several years studying what are known as lingering ash – trees that have fared much better against the emerald ash borer. The invasive beetle, which came to North America from Asia about 20 years ago, has killed millions of ash trees around the Midwest. 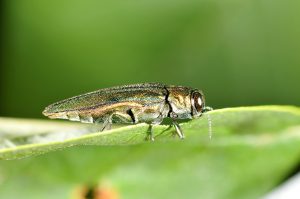 But for reasons that researchers are learning more about, some trees have survived.

Koch says they’ve identified at least two reasons why. Lingering ash seem to attract fewer hungry adult ash borers, which means they’re less likely to become homes to eggs. And when eggs do hatch on lingering ash trees, they tend to be smaller and have a higher mortality rate.

Those are extremely valuable characteristic for modern ash trees, so Koch is making sure they get passed on through cloning. Not genetic modification, but rather clonal duplicates of lingering ash literally cut from part of the parent tree.

Koch says they plan to add more lingering ash seedlings into their on-site orchard this year. Ash trees planted from seed typically take seven to 10 years to begin giving off seeds of their own, so it could be another decade before Koch knows just how successful their ash tree breeding program can be.