Harvesting Our Forests – The Wildlife Debate

Posted on January 31st, 2018 in Forestry, Wildlife, Woodlands | No Comments » 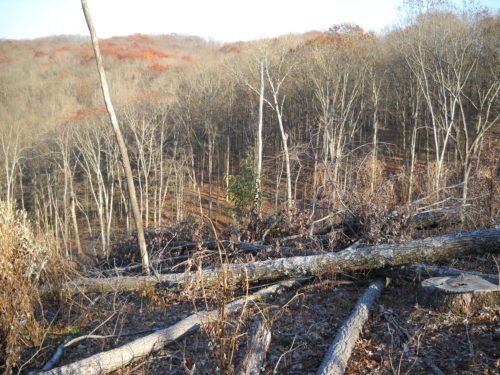 There has been much debate in the popular press lately regarding the role of timber harvesting on forest communities. A common focus of this debate is the perceived impacts to wildlife. Most believe that leaving our forests alone is best for wildlife. However, to provide habitat for all of our native forest wildlife species, forests need to be diverse in terms of age, species and area. Harvesting timber is the primary means of achieving this structural diversity. The purpose of this article is to summarize some key points regarding the effects of harvesting on reptiles and amphibians. These points are drawn mostly from the Hardwood Ecosystem Experiment (HEE), an ongoing research study in southern Indiana. Its primary focus is to study forest management and its effects on plants and animals. A more detailed summary may be found in Forest Management for Reptiles and Amphibians.

There has been several large-scale studies that have investigated the effects of tree canopy removal on amphibians and reptiles. These include the HEE in Indiana, the Missouri Ozark Forest Ecosystem Project (MOFEP), and the Land-use Effects on Amphibian Populations (LEAP). Much of the work from these projects has been published in the scientific literature. All of these studies demonstrate that the response of amphibians and reptiles to timber harvesting is variable—it cannot simply be quantified as good or bad. Indeed, avoiding negative impacts to all reptiles and amphibians as a result of timber harvesting is neither possible nor desirable since disturbance-dependent wildlife species1,2 and many mature forest species3, require early successional forests.

Forest management sometimes leads to short-term loses for some species but is critical to the long-term sustainability of many other species. Looking at the responses of just a few species, within cutover areas for a few years paints an incomplete picture. A large-scale, long-term perspective is necessary when considering forest management. This is the true value of well-designed studies such as the HEE. With experimental control and replication, researchers can untangle the story on what are the true effects of forest management over a large area over many decades. The HEE has shed light on many answers so far. We can look forward towards many more to come.

2 Greenberg, C. H., B. Collins, F. R. Thompson, III, and McNab, W. H. 2011. “What are early successional habitats, why are they important, and how can they be sustained?” Pages 1-10 in Sustaining young forest communities: ecology and management of early successional habitats in the Central Hardwood Region, USA. C. H. Greenberg, B. Collins, and F. R. Thompson, III., editors. Springer, New York, NY, USA.