Coyotes are on the move 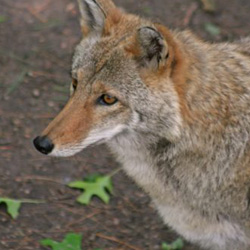 MyDNR Newsletter, Indiana Department of Forestry and Natural Resources (IDNR): Indiana residents are more likely to see coyotes during wintertime, but sightings are no cause for alarm. Coyotes become more active during winter as young coyotes leave their families to find a new home and coyotes begin breeding. Coyotes may look larger than they are due to their thick winter coats, but the average coyote only weighs 20-30 pounds.

Coyotes are present in all sections of the state. There are records of coyotes in Indiana as early as 1816, though they likely inhabited Indiana well before that time. Bounties were in place in Indiana on coyotes from at least 1849 through the late 1960s. Despite this persecution by early European settlers, coyotes persisted in Indiana. Historically, coyote populations were limited in range to the prairie regions of the state, and expansion may have partially been limited because wolves suppress coyote populations, and both red and gray wolves were once abundant in Indiana. However, with the eradication of wolves and conversion of habitat to farmland, coyotes have been able to expand and adapt to new habitats.  Statewide coyote abundance has slowly increased as coyotes continued to expand into previously unoccupied habitat.  Today, coyotes occupy all of Indiana, no matter the habitat type or amount of development.

To subscribe for the monthly newsletter view: MyDNR Email Newsletter.