As climate change and habitat destruction become more of a public concern, the popularity the Animal Planet channel has grown as it seeks to educate viewers about the importance of wildlife preservation and the role human interaction has in these habitats. The network now shows a variety of programming ranging from survival shows to conservation and management of wildlife.

Wildlife shows such as ‘The Crocodile Hunter’, ‘River Monsters’, and ‘The Zoo’ emphasize the efforts of biologists, wildlife researchers, and zookeepers involved with wildlife to the general public. More recent shows such as ‘Lone Starr Law’, ‘North Wood Law’, and ‘Rugged Justice’ show how Fish and Wildlife Game Wardens enforce laws (Federal and State) that protect aquatic, avian and terrestrial life.

The National Park Service mission, as directed by the Organic Act of 1916 is “to conserve the scenery, natural and historic objects, and the wildlife therein and to provide for the enjoyment of the same in such manner and by such means as will leave them unimpaired for the enjoyment of future generations.” Wildlife biologists/researchers and park managers require extensive information on the species within a habitat to best protect and conserve native wildlife. These data can then be used by managers to devise and implement strategies that will provide future protection of wildlife from invasive species as well as human-induced stresses (air and water pollution, deforestation and habitat encroachment).

Several methods for monitoring wildlife are employed by wildlife researchers in order to track animal movements and determine home range size within a particular habitat. For herding populations such as elk and deer, aircraft are used. For solitary animals such as bears and mountain lions, radio-telemetry can be used. A remote/trail camera (the most non-invasive tool for wildlife research) allows wildlife researchers to observe these animals in their natural habitat without disturbing them (our presence modifies the behavior of many species), answering the question of “What’s present when we are not there?” As an efficient and cost-effective way to supplement or replace human observers, remote wildlife viewing camera systems are used worldwide to document species presence and distribution addressing a variety of research and management objectives.

One of the most promising times to observe trail cameras is during the spring when many species have their young. A popular viewing request is to watch raptors, hummingbirds, and songbirds raise their young. Indiana and other nearby states have erected several high-definition cameras that allow real-time observations of some of these and other native species. 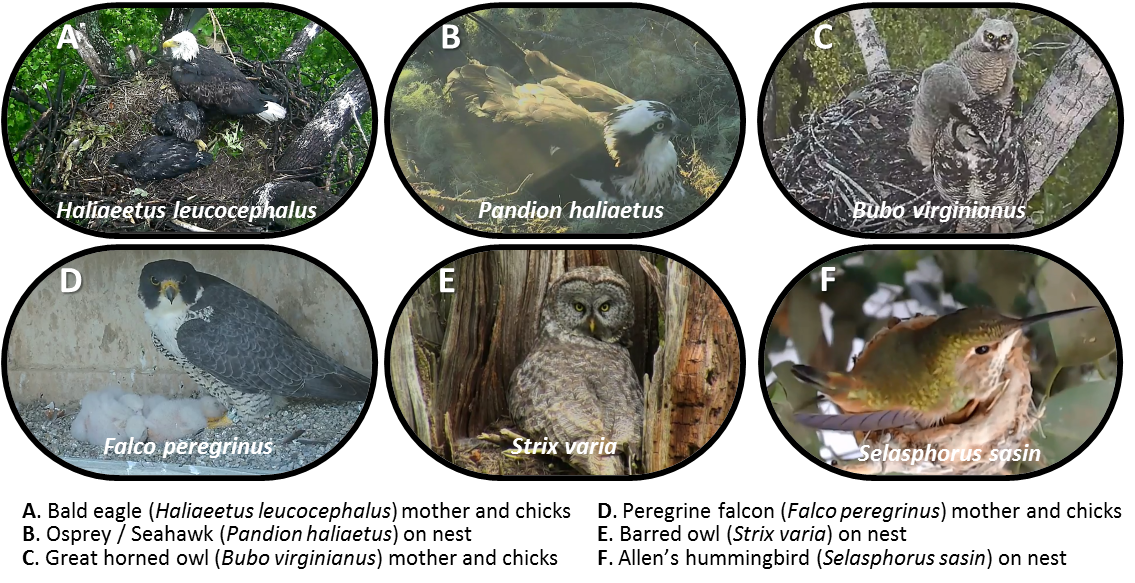 These cameras typically run 24/7 and allow viewers to see eggs hatching and parents feeding their young. There are also cameras within zoos nationwide, along waterways, and in fields to catch glimpses of other animals. If you are unable to venture into the field and want close-up views of some of our majestic wildlife. A host of different online sources are available for you to view animals in their natural habitat or those animals that may be housed in sanctuaries or zoos. Check out the cameras below to start or go to https://explore.org for more great species to watch.

As technology improves and operation costs decrease, use of trail cameras is becoming an increasingly more valuable tool as it gives a more definitive view of the pressures (both natural and human-induced) that wildlife face in their natural habitat. Information collected about wildlife in parks can be as simple as confirmation of the presence of a species or as detailed as the average number of young produced per female per year. If you come across a trail camera in a park or anywhere on public land, recognize the potential for sensitive wildlife habitat in the area and leave them undisturbed.