Why Is It Called A Box Turtle?

Box turtles are so-called because unlike most turtles, they can completely close up their shell, much like a box. They have a hinged belly that can close so tightly that even an ant couldn’t get inside. They have probably evolved this capability in order to be safe from predators such as raccoons and opossums. There is a wonderful British Broadcasting Corporation (BBC) video called Eastern Box Turtle.

We have two box turtle species in Indiana, the ornate box turtle and the eastern box turtle. Both are protected by law from disturbance of any kind with the single exception of moving them out of danger, such as helping one cross a road (place it on the side it was headed; it will cross again if you return it to the original side). 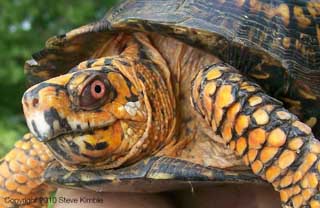 Both box turtl​es in Indiana are state protected because their numbers are declining, probably due to habitat loss and road deaths. What can you do to help? Slow down when driving, especially on rainy spring, summer or fall mornings. If you wish to have a box turtle as a pet, make sure that it was captive-reared, not wild-caught, though both are illegal in Indiana. If you encounter an injured box turtle that needs medical attention, call the Indiana DNR at 800-893-4116 or 317-232-4080 during business hours, 765-473-9722 (northern half of Indiana) or 812-837-9536 (southern half of Indiana).

To learn more about box turtles and other turtle species in Indiana, visit The Education Store for Turtles of Indiana.