Question: Are the Green Frogs Trying to Leave the Pond to Hibernate? 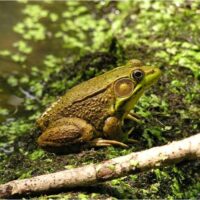 Question: My husband and I love to build wildlife habitat areas and have built a large pond with a strategic filtering system in the pond. We had to place a net five to six feet up to keep leaves and acorns out of the filtering system and now the frogs are jumping on the net. One specialist said they are trying to get to the woods to hibernate for winter and one shared that they can stay in the pond as long as it doesn’t freeze.  Which answer is correct?

Answer: Both of your answers could be correct. The following is from Michael Lannoo (2005) Amphibian Declines: The Conservation Status of United States Species. In summary, adults will hibernate in both water and on land, although underwater seems to be the most common site. The key is having available oxygen. However, hibernating amphibians when hibernating have extremely low oxygen requirements. So much so that most species get enough O2 from absorption through specialized patches of skin.

Green frog adults typically overwinter in water (Dickerson, 1906; Walker, 1946; Pope, 1947; Wright and Wright, 1949; Harding and Holman, 1999) but will occasionally overwinter on land (Bohnsack, 1951). The frog followed by Bohnsack (1951) was found beneath 5 cm (2 in) of compact leaf litter in an oak-hickory forest near Pickney, Michigan. Lannoo et al. (1998) cites an instance where a large number (25, including 4 gravid females) of green frogs were caught on land near a wetland during a cold snap in northern Wisconsin. Minton (1972) notes that adults near Indianapolis, Indiana, seek cover from early December to early March and that juveniles emerge earlier in the season than do adults. In Maine, green frogs hibernate either underwater or underground from October–March (Hunter et al., 1999). In Ohio, several hibernating individuals have been found in springs and in masses of leaves and aquatic vegetation on the bottom of small ponds (Walker, 1946).