Posted on June 21st, 2022 in Forestry, Gardening, How To, Urban Forestry, Woodlands | No Comments » 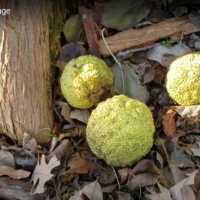 Question: I am building a hedge row and am contemplating working with Osage-orange seedlings and planting them. Is this a good choice?

Answer: Osage-orange, (Maclura pomifera) aka hedge, hedge-apple, bodark, bois d’arc and several other common names, is a tree native to parts of Arkansas, Oklahoma, and Texas, but has been planted in every one of the lower 48 states. The reason for that extensive planting was Osage-orange was promoted as the best tree for “living fences”, which were hedgerows planted to enclose or exclude livestock before the use of barbed wire. Osage-orange was also widely panted as a hedge-row and windbreak by the conservation programs of the FDR administration in the 1930’s. You can still encounter some of those old hedgerows on the landscape. It made a good hedgerow because the stems have stout thorns at the base of the leaves and will produce large and dense sprout colonies when cut back or pruned. It produced a living fence described as “horse-high, bull-strong, and pig-tight”.

The wood of Osage-orange was also used for wagon wheel parts, tool handles and fence posts due to its strength and rot-resistance. I have met a few landowners who showed me Osage gate or fence posts they had helped set as a child that were still in good condition 60 or more years later. It is also an excellent firewood, with one of the highest BTU yields of any native tree. Native peoples used straight-grained Osage-orange wood for outstanding bows, thus the French name bois d’arc and the English derivation bodark. Some crafters still seek Osage wood for making traditional bows or for turnings and other decorative items. The wood becomes so hard and dense with drying that it is recommended in most cases to work it green. The yellow-orange fresh wood color gradually ages to a deep reddish brown.

Osage-orange may have had more favorable treatment as a wood for many uses were it not for the tendency of the tree to fork, bend and twist, making straight, long stems uncommon.

The fruit of Osage-orange is where this and the hedge-apple name comes from. Osage-orange is neither a citrus tree nor an apple, but the large, round, green to yellow fruit suggest each to some extent. The interlacing bumps and crevices and the round shape suggest a brain to many, including myself. The closest relatives of Osage-orange are actually the mulberries. The size of this fruit and the limited number of current animals that will use it have prompted some to suggest it was originally eaten and propagated by large, and now extinct, ice-age animals such as the giant ground sloth, mammoth, and mastodon.

Osage-orange has many interesting and sometimes useful characteristics, but it can also become weedy in some situations. It can spread by seed or sprouts into disturbed areas like abandoned fields, farmlands, or grazed areas and out-compete native vegetation. For these reasons, planting new areas to Osage-orange is usually discouraged.