Watch out for deer on the roads 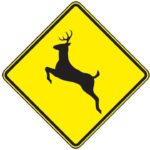 As a child growing up in rural St. Joe County, I can vividly recall the feeling of excitement when the occasional deer visited our backyard. It’s hard to believe now, but we actually placed salt licks out to attract deer for viewing. I still enjoy the sight of a white-tailed deer, but things are a lot different today – the Internet, iPods, and yes, more deer. Estimating the size of wildlife populations is a difficult task in most cases. Currently, experts estimate about 30 million white-tailed deer throughout its range. There are probably more white-tailed deer in North America today than at the time of European settlement. In Indiana, the total deer harvested today exceeds by many times the numbers harvested during my days of youth in the 1970s.

According to the Insurance Institute for Highway Safety, there are approximately one and a half million deer-vehicle collisions in the United States each year, resulting in about 150 deaths and over $1 billion in vehicle damage. The average claim of these deer-collisions is $3,995.

While deer-vehicle collisions can happen any time of year, October to December is the peak. Most collisions occur from dusk to dawn on high speed rural roads. In Indiana, if a deer dies following a collision with a motor vehicle, a conservation officer, DNR property manager or other law enforcement officer may issue a permit to an individual to possess the deer.

Don’t Waste Your Money
Many tactics have been tried over the years to reduce collisions. Most of these have proved ineffective or at least need more investigation. One common approach that does not work is the deer whistle. Deer whistles are attached to vehicles and emit noises at moderate to fast speeds. The noise presumably warns deer of approaching vehicles, thereby reducing collisions. While manufacturers contend that deer can hear the whistles up to a quarter mile away, published studies have not verified their effectiveness or whether or not deer can even hear them. The lack of deer response to deer whistles may be because deer don’t recognize the sounds as threatening or they have too little time to react.

What can I do?
There is no foolproof way to prevent deer-vehicle collisions. Hunting is the most biologically and economically effective method of maintaining Indiana’s deer herd at an optimal level – all else being equal, less deer translates to reduced probability of hitting a deer. Fencing deer from roadways has been proven most effective at reducing accidents at specific locations, but it is very costly to construct and maintain.

So what do you do? There are some common-sense precautions all drivers can take to reduce the risk of deer-vehicle collisions. The Insurance Information Institute recommends the following driving tips.

Got Nature? Blog post was also published in the IndyStar, How to avoid hitting a deer with your car, and what to do when you can’t.