Documenting an occurrence of a new wildlife species for a region is usually good news. Unfortunately, with the number of non-native species that seemingly pop up, this is not always the case. Extension Specialists across the U.S. often receive inquiries about identifying pictures of wildlife. We were recently contacted by an individual to identify the “white frog” pictured below. It was clearly not a native species from Indiana but rather a Cuban treefrog.

The Cuban treefrog (Osteopilus septentrionalis) is native to Cuba, the Cayman Islands and the Bahamas. These treefrogs were accidentally brought to Florida in the 1920s, probably as hitchhikers in cargo containers on ships. Cuban treefrogs are considered invasive in Florida (and elsewhere outside their native range) because they are likely to harm our native ecosystems and cause a lot of problems for humans. They are voracious predators and have likely caused declines of native treefrogs in many suburban areas of peninsular Florida. They get into people’s homes and sometimes end up in toilets. And they are even known to invade electrical equipment and have caused power outages in Florida.

Cuban treefrogs are much larger than Indiana’s native treefrogs with adults typically reaching lengths of 2 to 3 inches and large females may grow to about 5 inches. Body color is highly variable, ranging from whitish to gray, green, or brown, and may be marked with irregular, dark stripes or blotches that fade when the frog changes color. Their skin is warty (some warts quite prominent) and have large “bug eyes.”. The armpits and groin may be washed with yellow.

Native gray treefrogs, which occur throughout Indiana, look a lot like Cuban treefrogs. However, gray treefrogs have granular skin and normally do not have individual warts that stand out from the rest of the bumpy skin on their back. Gray treefrogs also have a light-colored blotch directly below each eye.

What can you do to help?
It is import to document the locations of Cuban treefrogs outside of Florida in the US and Canada. If you see a Cuban treefrog, or suspect you have seen one, outside of peninsular Florida please email Dr. Steve A. Johnson at tadpole@ufl.edu. Include your name, date you saw the frog, where you saw it (state, county, city, street address), and also attach a digital image so Dr. Johnson can positively identify the frog. It is also important to report Cuban treefrog sightings at EDDMapS, the online mapping system for invasive species in the US. Visit https://www.eddmaps.org/ and click the “Report Sightings” tab. Thank you for being a community scientist! 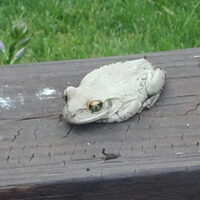 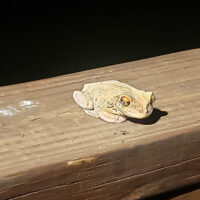 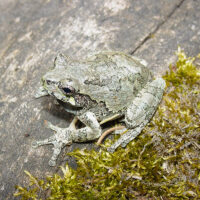 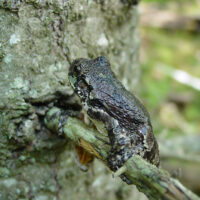