Billions of Cicadas Are Coming This Spring; What Does That Mean for Wildlife?

The spring of 2021 will bring the emergence of Cicada Brood X, a 17-year periodical cicada. These cicadas will number in the billions and will emerge across 15 states, including Indiana.

The reasons why this cicada eruption may be a benefit to wildlife vary. But they boil down to a few primary explanations. One fairly obvious cause and some more obscure. 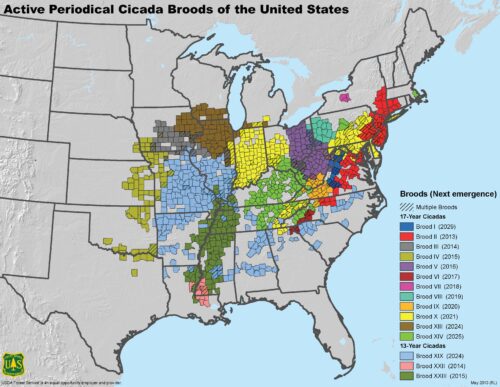 This map from the US Forest Service shows where the cicada Brood X (yellow) will occur this spring. Source: USFS

All you can eat cicada buffet
The most obvious way the cicada emergence may impact wildlife is by providing an all-you-can-eat cicada buffet. If you are a wildlife species that eats insects, this can be a good thing. Research, The Occurrence and Significance of Anomalous Reproductive Activities in Two North American Non-Parasitic Cuckoos Coccyzue SPP, from southern Indiana reported that some songbird species have more nests, larger clutches, and earlier breeding due to this superabundant food. And in a study, Population Responses of Peromyscus leucopus and Blarina brevicauda to Emergence of Periodical Cicadas, in west-central Indiana, short-tailed shrew populations increased fourfold during the year of cicada emergence.

Eat this, not that
Having access to this endless supply of cicadas also impacts wildlife populations for two less obvious reasons. These have to do with two main concepts; alternative food/prey and predator satiation.

In years of cicada emergence, many animals switch their diet to take advantage of this superabundant food; hence they have plenty of alternative food or prey. In one Indiana study, Food Habits of Mammals During an Emergence of 17-year Cicadas, raccoon diets consisted of 51% cicadas during the cicada emergence.

Access to this superabundant food source also means many animals may fill up on cicadas and consume fewer alternative foods. This is the idea of predator satiation. Predators may be so full (satiated) from cicadas; they spend less time and effort looking for alternative foods, such as bird eggs, leading to increased nest survival and productivity for many bird species.

These concepts and the abundance of food provided by cicadas often work in concert to impact many wildlife species. This can result in short-term increases in population or nest or brood survival in some species. Here are a few examples of how cicadas can impact wildlife. 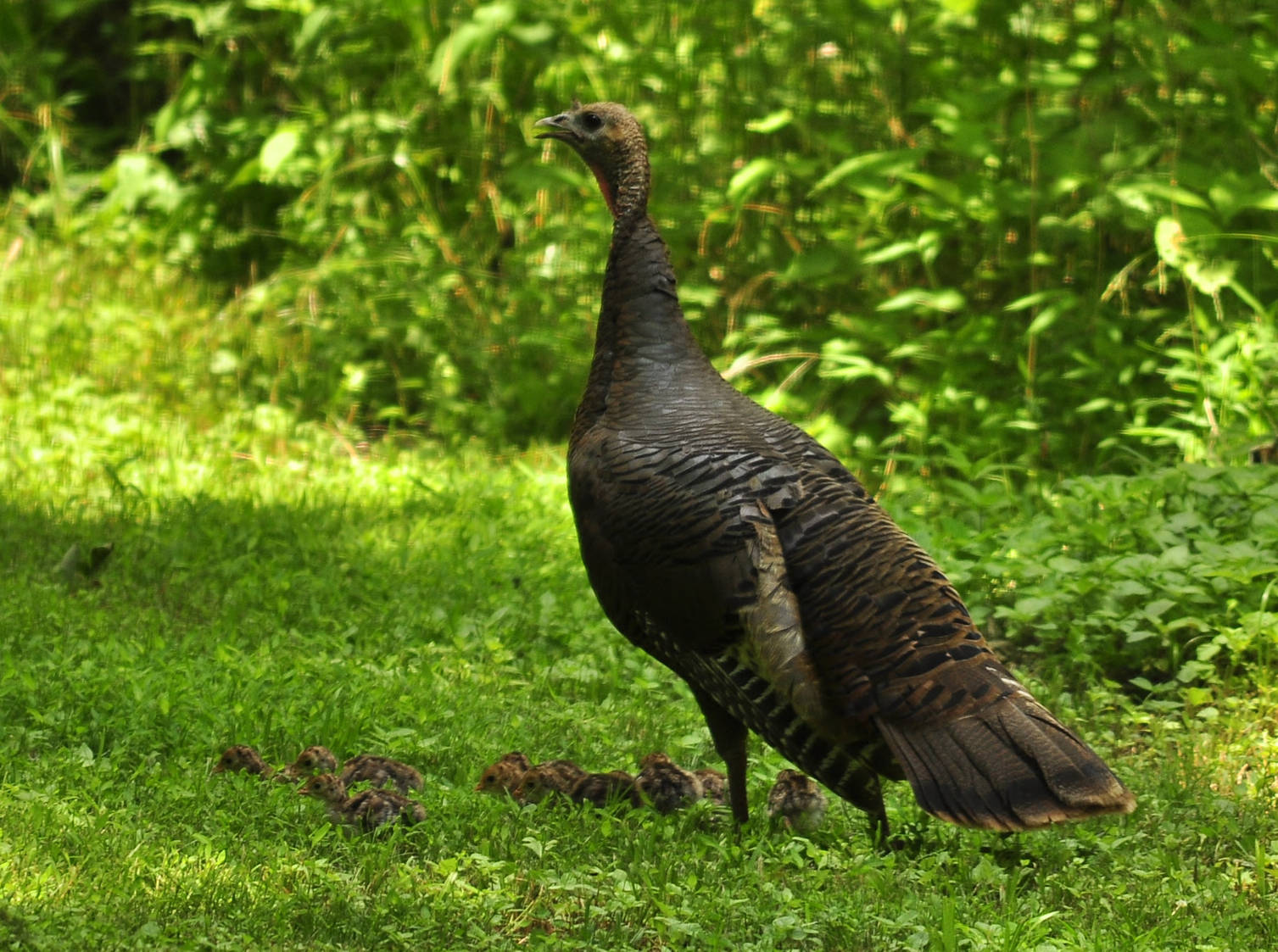 Wild turkeys are one of the species that can benefit from a cicada emergence. Photo credit: USFWS

Wild turkeys; more poults and higher harvest
One example of how the 17-year cicada emergence can impact wildlife relates to wild turkeys. During the last emergence in Indiana in Wild Turkey Brood Production – Summer 2005, turkey productivity (poults/hen) increased an estimated 83% compared to 2003 and was 52% higher than the average productivity from 1993-2020. According to Indiana DNR Wild Turkey Biologist Steve Backs, this increase was related to 2 major factors; good weather during nesting and brooding season and an abundance of cicadas.

“Turkey production goes up in a cicada year because both poults and hens benefit from the availability of the abundant invertebrate food, spend less time feeding, and have less exposure to predation. Potential nest, egg, and poult predators are also pre-occupied or distracted by feeding on emerging cicada larva (alternative prey),” said Backs.

This increase in turkey production may also lead to more turkeys gobbling and more turkeys harvested in the following years. If we look at turkey gobbling, Spring Wild Turkey Gobbling Counts, 2019, and harvest data Spring Wild Turkey Harvest Results – 2020, from Indiana, there was a spike in turkey gobbling and harvest two years (2006) after the 2004 17-year cicada emergence. 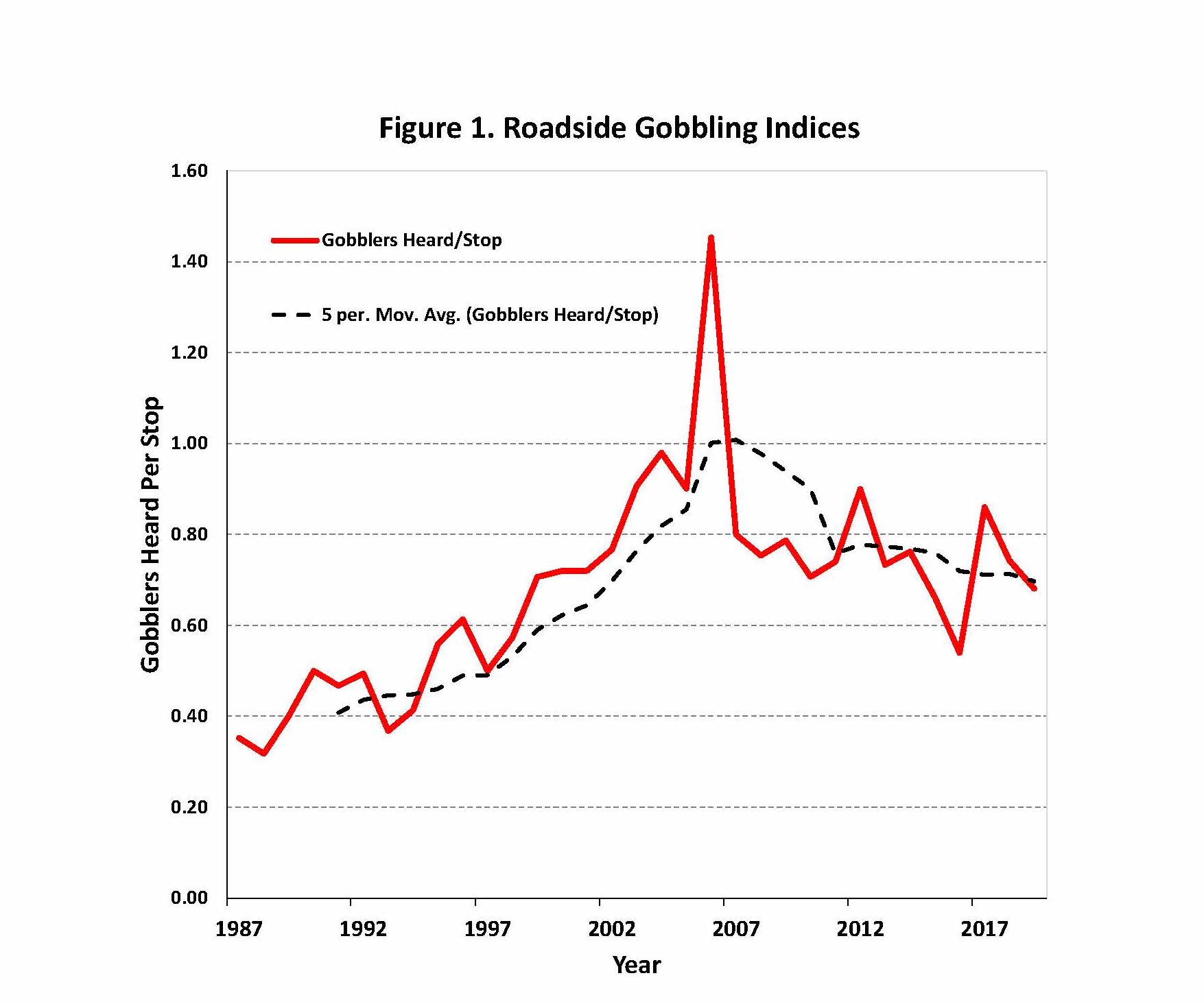 According to Backs, “Increased turkey production during the cicada event year is subsequently manifested in the turkey gobbling counts and harvests two years later. Two-year-old gobblers are the most active or vocal gobblers, they are also the most vulnerable to harvest, and the proportion of 2-yr-olds in the population is a principal driver of our spring turkey harvests.” 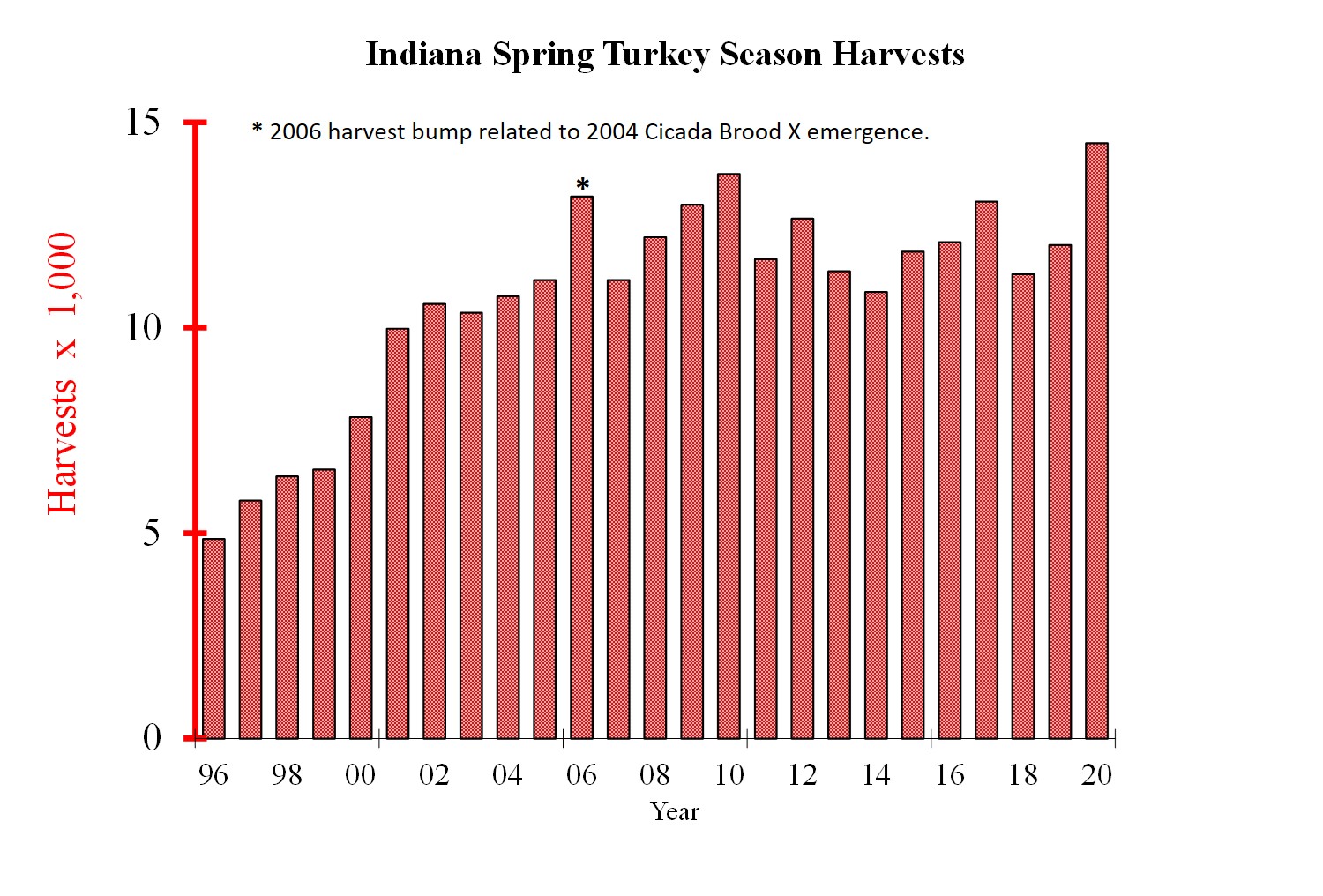 Cicadas are for the birds
Beyond just turkeys, the cicada emergence may also be beneficial to many songbird species. In one study, The Effects of a Periodic Cicada Emergence on Forest Birds and the Ecology of Cerulean Warblers, at Big Oaks National Wildlife Refuge in southeast Indiana, nest survival for several songbird species increased during the 2004 17-year cicada emergence. This increase was likely due to the birds having an abundance of food and less pressure from nest predators. However, nest success declined the following year, indicating the cicada emergence’s benefits may be short-lived.

In another study, Effects of Periodical Cicada Emergences on Abundance and Synchrony of Avian Populations, from the US Forest Service, that looked at regional songbird populations, some songbird species increased only during the year of cicada emergence (e.g., yellow-billed cuckoo). Other species’ populations increased 1-3 years after cicada emergence (e.g., red-headed woodpecker and blue jay). And some species populations didn’t change (e.g., red-eyed vireos). These changes are likely related to increased food abundance and increased nest and brood survival in these bird species.

Ephemeral pulse
While some wildlife may benefit from the 17-year cicada emergence, just like the emergence itself, the impacts are often short-lived. The change in population size or nest or brood survival may only last for 1-3 years following the emergence.

And in some cases, the cicada emergence may lead to some unforeseen consequences. For example, predator populations may increase following a cicada emergence which may decrease survival or productivity for some species for 1-3 years following emergence.

We won’t know what wildlife benefits the 2021 Brood X cicadas will bring until after they emerge. But when it comes to turkeys, Backs recommends not to count your turkey eggs before they hatch. “No matter how many extra poults hatch because of the cicadas and how much potential cicada food is out there, 1-2 big rain events in early June can significantly reduce turkey poult survival, which may negate the positive impact of the cicada emergence.”