Be on the watch for Epizootic Hemorrhagic Disease (EHD) in deer 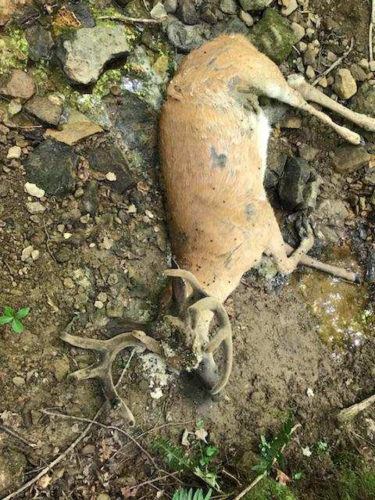 Deer that die from EHD are often found around water. This deer was found in August 2019 in Crawford County and was likely killed by EHD. Photo courtesy of Brody Wade.

Be on the watch for deer with EHD in Indiana
Recently, a white-tailed deer in Clarke County Indiana tested positive for Epizootic Hemorrhagic Disease (EHD), and potential EHD cases have been reported in 26 other Indiana counties. Here are a few things you should know about how EHD, how to spot it, and how to report it.

What is EHD and BTV?
Epizootic hemorrhagic disease (EHD) and bluetongue virus (BTV) are viral diseases, collectively called hemorrhagic diseases (HD), and are common in white-tailed deer. Both diseases are transmitted by biting midges often called “no-see-ums” or gnats. Neither disease is a human health issue, but they can cause significant mortality in white-tailed deer. Outbreaks of HD tend to impact deer populations locally, meaning an outbreak may occur in one part of a county but not in other parts.

When do EHD outbreaks occur?
EHD and BTV outbreaks often occur in late summer and early fall (August-September), especially in years with drought-like conditions. Drought causes water sources to shrink, which creates warm, shallow, and stagnant pockets of water creating ideal breeding habitat for the midges that transmit EHD. Deer also congregate in these areas to find water, which helps the midges pass the disease between infected and healthy deer. EHD outbreaks can last until a frost that kills the midges.

What are the signs of a deer with EHD?
Deer with EHD often appear weak, lethargic, and disoriented. Other signs of EHD in deer are ulcers in the mouth or on the tongue, swollen face, neck, or eyelids, and a bluish color to the tongue. Deer with EHD often search for water to combat the fever caused by the disease. EHD can be confirmed by testing blood and tissue (i.e., spleen) samples, but samples must be collected shortly after death.

Where am I likely to find a deer with EHD?
Because deer with EHD often seek out water to combat the resulting fever, deer killed by EHD are commonly found around water. If you have a stream, creek, river, or other source of water on your property, looking in the vicinity of those areas can help you locate deer that have succumb to EHD.

Can deer survive an EHD outbreak?
Yes, some deer will survive EHD. While up to 90% of deer that contract EHD may die from the disease, the deer that survive build up antibodies to EHD, which may make them immune to future outbreaks. Additionally, does may pass the antibodies and immunity to their offspring. 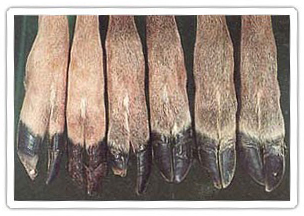 Sloughing or splitting hooves on two or more feet of a deer taken during the fall hunting season are typical of chronic HD. Photo courtesy of the Southeastern Cooperative Wildlife Disease Study.

How can I tell if a deer I killed during hunting season has survived EHD?
If you kill a deer during the hunting season this year, pay attention to the hooves. Deer that survive an EHD outbreak often have indentions or cracks on their hooves (see picture).

Sloughing or splitting hooves on two or more feet of a deer taken during the fall hunting season are typical of chronic HD. Photo used courtesy of the Southeastern Cooperative Wildlife Disease Study.