Watch Out For Forest Hitchhikers – Ticks!

Posted on May 18th, 2015 in Forestry, Got Nature for Kids, How To, Safety, Urban Forestry, Wildlife | No Comments »

When you rush to the closet to grab your favorite shorts and T-shirt, remember that you are not the only creature looking forward to the warmer weather. It is important to check yourself or have a buddy check you for passengers when you get back from the field to lessen the likelihood of bringing ticks home with you.

Indiana has 15 tick species, but the three listed below are the most prevalent.

American Dog Tick (Dermacentor variabilis): Found primarily along trails, walkways or in fields, American Dog ticks are rarely found in forests. Despite their name, these ticks feed on a multitude of hosts in addition to the family pet and can transmit Rocky Mountain Spotted Fever, a potentially fatal disease contracted by 32 people in Indiana last year. The American Dog Tick also carries Tularemia, a rare but dangerous disease that is often misdiagnosed for the flu.

American Dog ticks can survive for two years at any stage in life until a suitable host is found. Male ticks mate with the female while she is feeding as after she is sated, she drops off of the host and lays 4,000+ eggs before dying. Larval ticks only feed for three to four days from a host before molting into nymphs. The nymph feeds on a variety of small/medium-sized hosts before dropping to the leaf litter and molting into adults. Interestingly, these ticks are least likely to bite humans.

Lone Star Tick (Amblyomma americanum): Found primarily in dense underbrush and forested areas. As with the American Dog Tick, these ticks are capable of transmitting Rocky Mountain Spotted Fever in addition to Monocytic Ehrlichiosis, another tickborne disease that presents with symptoms similar to the flu but was confirmed in 49 Indiana cases in 2013. ‘Stari’ (Southern Tick-Associated Rash Illness) Borreliosis is a tick-vectored disease that presents with a large round or elliptical rash and flu symptoms transmitted by the Lone Star Tick.

Voracious eaters, adult Lone Star ticks often take human hosts or other large mammals. After a week, the female is capable of laying 3,000+ eggs. The larval Lone Star ticks only feed for four days before detaching, burying themselves in leaf litter and molting into nymphs. Able to quickly ascend up pant legs, these nymphs can be firmly attached to a host in < 10 minutes. After five days, the nymphs detach and molt into adults.

Deer ticks are most notorious for spreading Lyme disease, a dangerous disease that causes flu-like symptoms that, if left untreated, can spread to joints and compromise the nervous system. More than 100 cases of Lyme disease were confirmed in Indiana in 2013. Babesiosis is caused by microscopic parasites that infect red blood cells, and Anaplasmosis is caused by the bacterium Anaplasma phagocytophilum. Both of these diseases are transmitted through the bite of an infected Deer Tick.

Only the female Deer Tick feeds, and once completely engorged, they lay an egg mass of 1,900+ eggs before dying in late-May. Deer Tick larvae and nymphs remain in the moist leaf litter within forested areas and prefer smaller hosts. After feeding for three days in each developmental stage, they burrow into the litter to molt. Larvae emerge as nymphs in spring, and nymphs emerge as adults in fall. 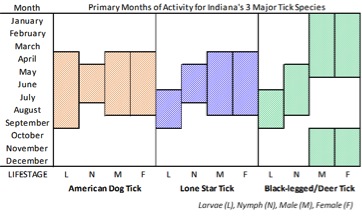 The table here illustrates the months of activity for the larval, nymph, male and female tick life cycle stages which gives you a quick reference for Indiana. This information was gathered from the resources listed in this post.

Indiana ticks can carry several diseases, but the three most common are Rocky Mountain Spotted Fever, Lyme Disease and Ehrlichiosis. Symptoms of all three diseases range from spreading rashes, headaches, fatigue, fevers and muscle aches. Likelihood of infection is rare; however, instances of each disease are increasing in Indiana.

Be careful and try not to pick up eight-legged hitchhikers. If you suspect that you have been bitten by a tick or develop a rash along with flu symptoms, contact your local health department for a disease screening.