Unexpected Plants and Animals of Indiana: What is roughly the size of a potato, tastes like a banana and had its own dedicated month on the Native American Shawnee tribe’s calendar?

It’s not a riddle it’s the pawpaw fruit, borne by the pawpaw tree (Asimina triloba), a tree with close tropical relatives that is native to much of North America.

Known affectionately as the Hoosier banana (and to Kentuckians as the Kentucky banana, and so on), the pawpaw fruit is the largest native fruit in North America and has a rich cultural and culinary history throughout the Midwest. A staple of many Native American tribes’ diets, the pawpaw was also consumed by early settlers in the region and relied on during the Great Depression as a substitute to other, more expensive, fruits. Before the pawpaw became known as the Hoosier banana, it was called the poor man’s banana.

In recent decades, however, the pawpaw fell out of culinary vogue. While the trees can be found growing in the wild, usually in forested areas, or in backyards of the ambitious gardener, pawpaw is consumed and grown largely as a novelty.

“Not that many people grow pawpaws in their backyard,” Rosie Lerner, Extension consumer horticulturist, said. “It’s a native tree, has rather specific pollination requirements to be able to set fruit, is difficult to transplant and is not widely available at local nurseries.” 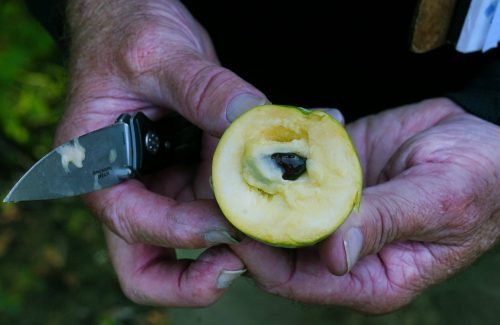 Bruce Bordelon, professor of horticulture, shows off the inside of a pawpaw fruit. Photos by Tom Campbell.

Emily Wendel, a freshman in horticulture and landscape architecture, grew up on an Indiana farm surrounded by naturally occurring pawpaw trees. While she doesn’t care for the fruit, her father has developed a passion for harvesting pawpaws, eating them raw or incorporating them into different recipes. He even delivers them regularly to Wendel’s grandmother who lives just down the road.

“My grandma and I don’t really like pawpaws raw but my dad kept bringing her buckets full,” Wendel said. “My grandmother used to be a home economics teacher. She didn’t want them to go to waste, so she started using them in different things. She makes this bread that we both really like.”

When Wendel’s grandmother heard her granddaughter recently discussed and tried pawpaws in her introductory botany class, she baked a batch of bread for Wendel to bring her peers.

“I grew up in a small town so it was normal to bring something grandma baked to class. People would get excited,” Wendel added. “In college I thought maybe people would wonder about the strange girl with the pawpaw bread. But most people were willing to try it and really enjoyed it. And it made my grandmother’s day.”

Wendel’s grandmother even wrote out the recipe below for her to share with others.

“Even though I don’t always like the taste, it’s really neat to have a fruit like pawpaws native to Indiana,” Wendel said. “I hope trying it in the bread has opened people’s eyes to its uses.”