CNBC ranks Purdue among colleges that pay off the most 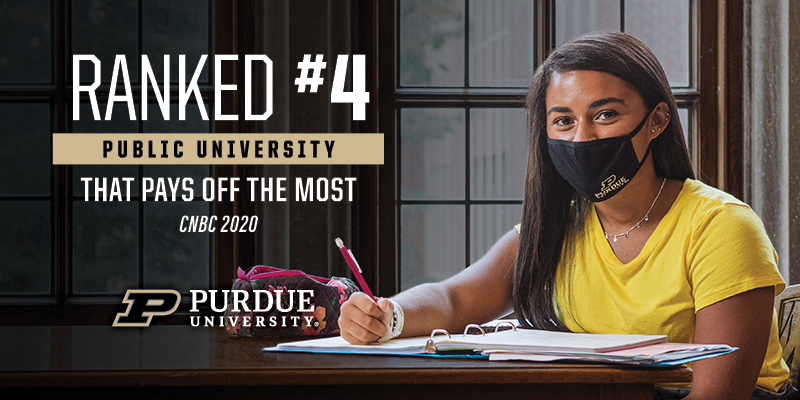 Again and again and again, Purdue University renews its dedication to the persistent pursuit of excellence and affordability. According to new CNBC rankings, this persistence pays off for our graduates.

Already ranked as America’s No. 8 public university and No. 7 best value school by The Wall Street Journal/Times Higher Education, Purdue recently earned the No. 4 ranking on CNBC’s 2020 list of the top public U.S. colleges that pay off the most. That list appeared within CNBC’s annual 50 Colleges that Pay Off the Most rankings, which spotlight 25 private schools and 25 public schools that provide students the highest average salaries for their tuition dollars. Purdue recently earned the No. 4 ranking among public schools on CNBC’s annual list of the 50 Colleges that Pay Off the Most. The top five public and private schools are shown here. Download image

“Honestly, I’m not surprised by that ranking. It’s amazing, knowing that I picked a university that is recognized by organizations outside Purdue as being so worthwhile,” says Maddie Deselem, a senior from Peoria, Illinois studying neurobiology and physiology.

“Considering all the opportunities I’ve had to learn and grow, Purdue has given me astronomically more than I could have ever expected. I don’t think I would have had all those opportunities if I was at another university,” Deselem says. “I also know that my Purdue degree will open the door to more opportunities in the future.”

Purdue’s appearance on the CNBC list was based on very specific criteria. But its ranking aligns with the broader University goal of making affordability and accessibility top priorities without compromising an education that is considered to be among the nation’s most valuable. This institutional initiative has many facets but centers on a tuition freeze that was instituted in 2012 and extends through 2021-22.

“I grew up in Indiana so I kind of always wanted to go to Purdue. But I don’t think anyone can question the value of a Purdue education or what a Purdue degree can do for your career,” says Mitchell Demerly, a senior computer science and economics major from Avon. “Beginning with the tuition freeze, I’ve seen all the ways that Purdue has succeeded at creating more value for students. And I’ve met a lot of students who were absolutely impacted by what Purdue has done over the last 10 years.”

Find a Degree That Pays Off