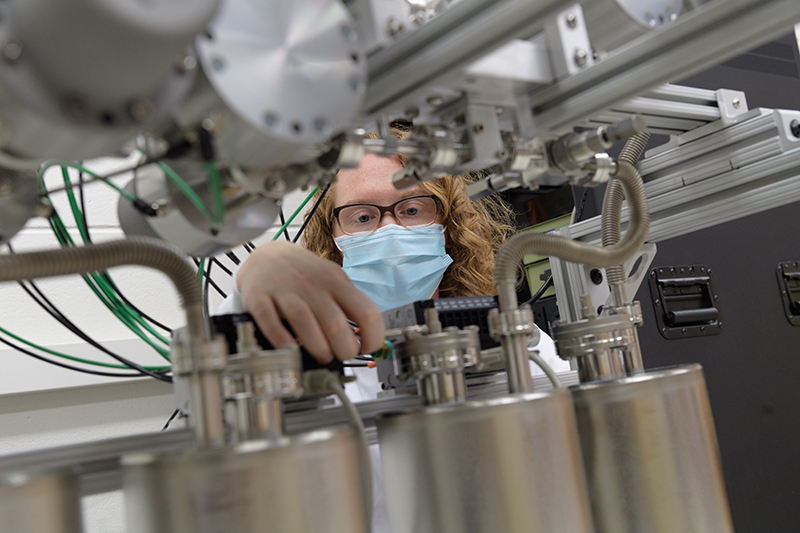 As 2020 ties for warmest year on record, a Purdue scientist is bringing new data to the table

WEST LAFAYETTE, Ind. — An early-career scientist from Purdue University has developed a novel method of measuring the temperature history of continental surfaces, a critical innovation considering that most information on past climate comes from ocean data. As overall global temperatures in 2020 reached record highs, data collected through this new method could help scientists working diligently to discover innovative ways of understanding and addressing climate change.

As a noble gas geochemist, Marissa Tremblay, an assistant professor of geochemistry in Purdue’s Department of Earth, Atmospheric, and Planetary Sciences in the College of Science, studies the behavior of noble gases in rocks and minerals. While the study of noble gases has contributed to climate conversations since the 1970s, Tremblay has discovered a way of harnessing data from a behavior conventionally classified as useless.

The behavior, called temperature dependent diffusion, occurs when gases escape from their host mineral. Processes such as cosmic ray bombardment or radioactive decay may cause noble gases to form inside certain rocks and minerals. On the moon, for example, exposure to high-energy cosmic rays from space generates neon in minerals at the moon’s surface. Different temperatures, then, cause the noble gases to seep out of the mineral at different rates. Tremblay uses temperature dependent diffusion to determine the age and temperature history of minerals on planetary surfaces, including on Earth, the moon and Mars. 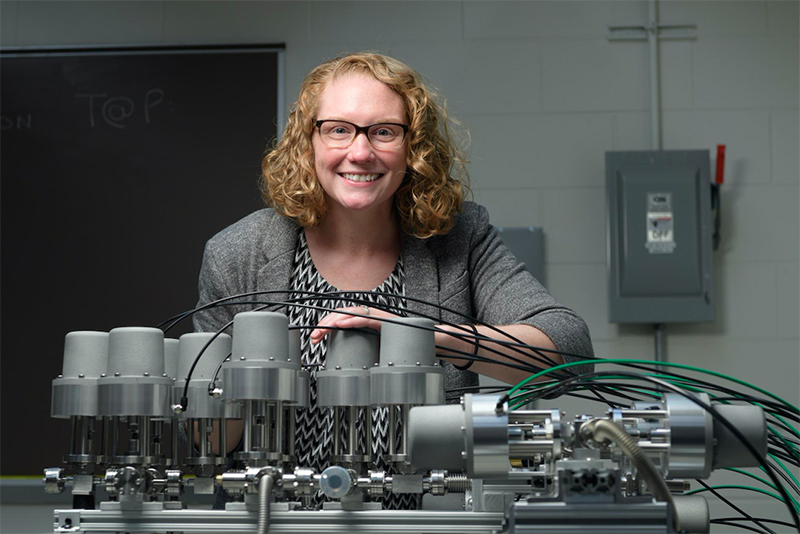 Marissa Tremblay, professor of geochemistry at Purdue University, with a custom extraction line that isolates and prepares gases for measurement after extracting them from rocks and minerals. Tremblay is assembling a noble gas thermochronology laboratory at Purdue capable of studying the behavior of noble gases in rocks and minerals. (Purdue University photo/John Underwood)

“Noble gas scientists have known about the ‘leaky’ behavior of noble gases for a long time; however, it was categorized as an undesirable behavior in measuring noble gases, so these methods were avoided,” Tremblay said. “We flipped that on its head and said, ‘Let’s actually use this to learn about temperature history.’”

Tremblay’s method is drawing attention from across the scientific community. Two of her projects — to take place in Antarctica and India — have recently received funding from the National Science Foundation. Tremblay also received the 2021 Marion Milligan Mason Award for Women in the Chemical Sciences. Presented by the American Association for the Advancement of Science, the Mason Award recognizes early-career scientists whose research promises both to advance their field and benefit society.

According to the latest data from the Copernicus Climate Change Service, 2020 has tied 2016 as the warmest year on record, and the onset of 2021 marks closure of the warmest decade on record. Understanding how temperature has changed over time on land could have major implications for conversations about climate change, which, in the absence of many records on land, have relied largely on marine and ocean data.

Tremblay’s team will travel to the Antarctic McMurdo Dry Valleys, a region where the surface has been exposed for millions of years, to ascertain temperatures from the mid-Pliocene Warm Period, 3.3–3.0 million years before present. Identifying surface temperatures and correlating these to sea levels will fill a gap in existing climate history data, as existing ice cores provide information for only the last approximately 1 million years.

“While we have a good idea about how much sea level changed in the mid-Pliocene, we don’t know exactly how this relates to temperature, particularly in Antarctica. Having land-temperature data points will improve climate models.” Tremblay said.

The mid-Pliocene period is considered the closest known analogue to current climate conditions, so modeling the period’s climate is critical to understanding how today’s climate could change in the future. The project is one of Tremblay’s NSF-funded projects and will proceed when travel is safe and practical.

“Using the relationship between temperature and snow cover, we can figure out when snow cover started to change,” Tremblay said. “In this case, we can see that there is a change in snow cover within the last several hundred years, or since the start of the industrial period.”

Reaching further back in time, Tremblay also is using noble gases to determine time between volcanic flows during the formation of the Indian Deccan Traps. Developing over the course of about a million years at the end of the Cretaceous period, roughly 66 million years before present, the region is made of layered volcanic flows that cover an area of about 500,000 square kilometers, today. Formation of the region is often linked to the mass extinction event that killed the non-avian dinosaurs, but even with the most precise dating methods, questions still remain about the correlation between volcanic activity and an effect on living beings.

Tremblay’s team will diverge from traditional approaches to dating. Instead of asking how long ago the flows occurred, they will use noble gas measurements to ask how much time passed between individual lava flows. Measuring noble gases at different depths may tell Tremblay how long the volcanic rock was exposed at the surface before being covered by a newer layer. The resulting timeline will bridge existing dates, offering researchers more comprehensive timelines to consider. Tremblay’s work in the Deccan Traps also has received NSF support.

Noble gas diffusion occurs beyond Earth’s atmosphere, and Tremblay has extended her scientific questioning to match. As part of the science team using the Lafayette meteorite to date the existence of transient, sub-surface water on Mars, Tremblay focuses on minerals within the meteorite known to have been produced in proximity to water. Temperature dependent diffusion has allowed Tremblay to determine that this water-borne mineral was not altered by events such as ejection from Mars’ surface, space travel and entering Earth atmosphere.

By measuring the presence of argon, Tremblay has been able to study lunar impact history. When the surface is heated during an impact, the minerals lose argon at different rates. The resulting measurements tell Tremblay when the impact occurred and how hot the surface became. The timing of impacts on the Moon could inform our understanding of how similar collisions could have affected the early Earth billions of years ago, including the development of life.

Since joining Purdue last fall, Tremblay has committed much of her time to building the technology of her lab, Thermochronology @ Purdue, in which she and her students will be able to replicate the naturally occurring processes that form and diffuse noble gases. Stocked with a collection of high-tech and one-of-a-kind equipment, the new noble gas thermochronology laboratory is on pace to be at the forefront of noble gas measurements.

“There are not many labs in the world equipped to study past climate with cosmogenic noble gases, and we’ll be one of them,” she said. “The area is still emerging, but I think it’s going to be very important in the next 10-20 years.”


Note to journalists: Photos of Marissa Tremblay are available for media use via a Google Drive folder. Journalists visiting campus should follow visitor health guidelines.