Chunk of the Lafayette Meteorite from Mars returning to Purdue

WEST LAFAYETTE, Ind. — A segment of the Lafayette Meteorite that once resided at Purdue, but was on display at the Field Museum of Natural History in Chicago for decades, will return officially to Purdue on Thursday (April 25) during a Giant Leaps Sesquicentennial event.

The meteorite will be presented at the beginning of the Ideas Festival event “What IF We Blaze a Path to Mars?” at 6:30 p.m. in Stewart Center’s Loeb Playhouse. This space policy event is in a new location to accommodate greater interest. It features a panel discussion with Bill Gerstenmaier, NASA associate administrator for Human Exploration and Operations; Mary Lynne Dittmar, executive director of the Coalition for Deep Space Exploration; and Jonathan Lunine, planetary scientist at Cornell University. Purdue President Mitch Daniels is moderating the event, and a news release is available online. 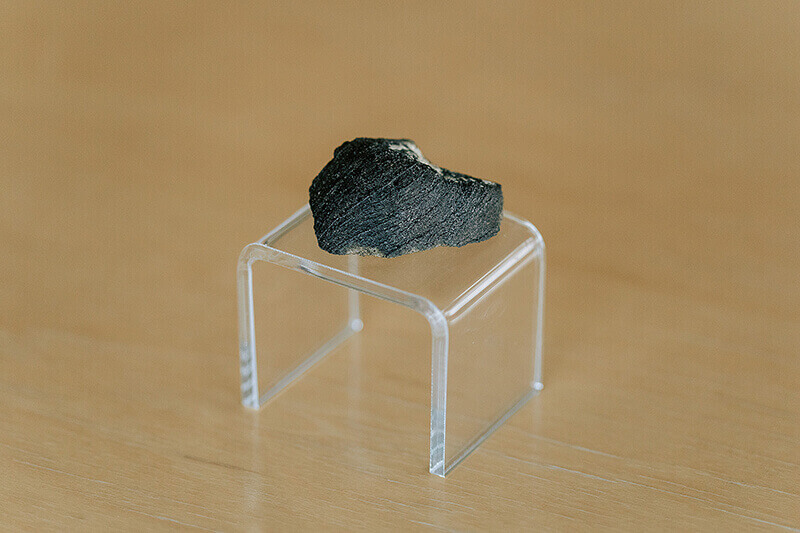 A segment of the Lafayette Meteorite that once resided at Purdue, but was on display at the Field Museum of Natural History in Chicago for decades, will return officially to Purdue on Thursday (April 25). This Martian meteorite – about two inches long – will be on display through Homecoming. (Purdue University photo/Kelsey Schnieders Lefever) Download image

This Martian meteorite – about two inches long – will be on loan from the Field Museum through Purdue’s 150th anniversary celebration, and it will be on display starting Monday (April 29) in Neil A. Armstrong Hall of Engineering next to the moon rock brought back by the Apollo 17 astronauts. The Lafayette Meteorite will be on display through Homecoming, when the 150th anniversary celebration concludes with an astronaut reunion.

In 1929, this rock was found in a drawer in Purdue’s Biology Department. Nobody knows for sure how it got there. It was recognized as something different from typical rocks found in Indiana and sent to the Field Museum in Chicago for identification. Museum officials confirmed it to be a meteorite by its glassy outside, which was created by the intense heat it experienced while passing through the atmosphere, as well as by the minerals found within it, which are unusual for Indiana rocks. Meteorites are named for where they are found; hence this rock was named the Lafayette Meteorite. Sometime later, it was donated to the Field Museum by parties unknown. A larger segment also is on display at the Smithsonian National Museum of Natural History, and a couple smaller pieces are elsewhere for research purposes. 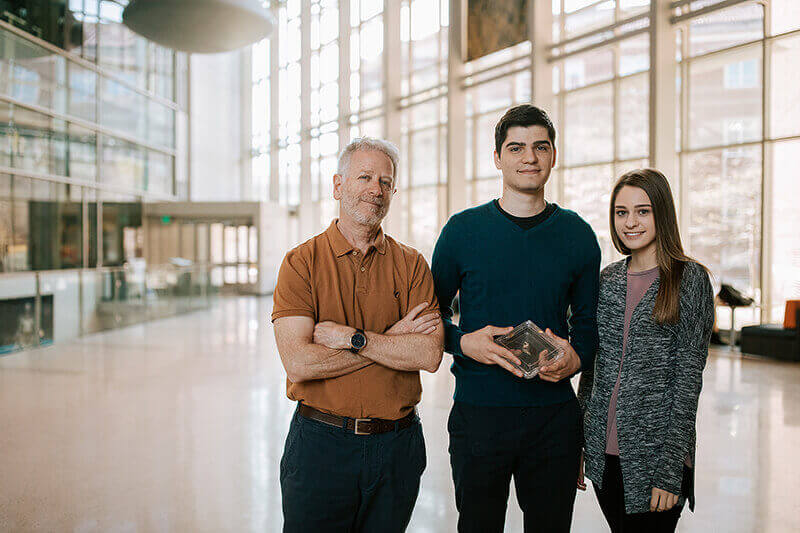 The Lafayette Meteorite returns to Purdue, thanks to a student-led petition that started when Andy Freed, professor of earth, atmospheric, and planetary sciences, mentioned the Martian meteorite during his classes. The effort was led by professional pharmacy students Phillip Cozariuc and Lauren Dilk. (Purdue University photo/Kelsey Schnieders Lefever) Download image

“In the 1980s, gases trapped in this and other similar rare meteorites were found to match those measured in the Martian atmosphere by the Viking landers. This rock came from Mars,” said Andy Freed, Purdue professor of earth, atmospheric, and planetary sciences. “It would have been blasted off of the Martian surface millions of years ago by an asteroid impact and orbited for a time around the sun until it came across Earth’s orbit. It then plunged through the atmosphere as a fiery meteor, with this fragment surviving all the way to the surface.”

This past fall, Freed spoke about the Lafayette Meteorite in his The Planets course and his Geosciences in the Cinema course, which are offered by the College of Science. This prompted some of his students to begin an online petition to bring the meteorite back to campus.

“With the 150th anniversary of Giant Leaps, we knew it would be special to bring it back and we saw how important it was to Dr. Freed,” said Lauren Dilk, a professional pharmacy student from Carmel, Indiana, who was involved in leading the student effort with Phillip Cozariuc.

“It’s cool to know that we started a petition, and we really didn’t have much hope we’d see it, and now here it is in front of us and at Purdue,” said Cozariuc, a professional pharmacy student from Wheeling, Illinois.

Freed and Michelle Thompson, an assistant professor in the Department of Earth, Atmospheric and Planetary Sciences, took the students’ request to the university and then the Field Museum for permissions to display the rock in West Lafayette.

The Ideas Festival is a series of events that connect world-renowned speakers and Purdue expertise in a conversation on the most critical problems facing the world. One of the Ideas Festival’s themes is “Giant Leaps in Space.”

B-roll is available at https://bit.ly/meteorite-media.