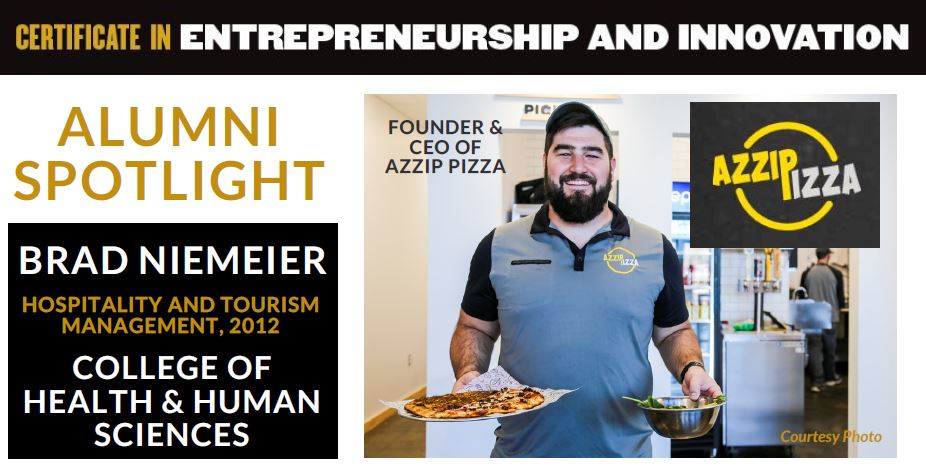 Brad Niemeier, a 2012 College of Health and Human Sciences and ENTR Alum, knew from his early days as a Purdue student that he wanted to start his own pizza company. Back then he would hold regular pizza tasting nights at his apartment with some of his teammates from the Purdue football team where he would have them try out different recipes he was developing.

While taking classes in the Certificate in Entrepreneurship and Innovation program, Brad began to further develop his idea of what he wanted his pizza business to be like. Brad knew he wanted to create a unique pizza experience for his customers and looked for a niche in the market. Brad’s idea for Azzip Pizza was born, a pizza company that delivers personal pizzas, that are made in front of the customer and ready in around 5 minutes. “The idea of a personal pizza company was conceived at Purdue, it was tested on other current students, vetted by professors and eventually outside judges.” In 2012 Brad won the $20,000 Burton D. Morgan Business Plan Competition, which gave him needed funds to start Azzip Pizza in 2014.

Beginning as one store in Evansville, Indiana, Azzip Pizza has grown to seven locations in Indiana and Kentucky with a team of over 150 people and over 2 million pizzas served.

Being the founder and CEO of Azzip, Brad has had the opportunity to perform a wide variety of roles within the company, ranging from dishwasher to pizza maker, bookkeeper to maintenance engineer, and marketer to community outreach. He believes that working in these different roles, was one of the greatest things about starting his own business, because he got to do it all.

Brad and his Azzip team are focused on delivering good food and good service. They believe in one pizza and one customer at a time and they have strived to create an environment at Azzip where employees enjoy coming to work and being around each other. In fact, Azzip has become a family-business, with several members of Brad’s immediate family now working within the company. Brad shares, “I’m proud of the fact that I started something that has become more than me and is able to impact our whole family.”

As Brad looks back on his early days at Purdue and the dream he had of starting Azzip Pizza, he is grateful for the opportunities and education he received at Purdue. “The Certificate in Entrepreneurship and Innovation program gave me the tools to be innovative and try something in my career that I do not think I would have had the courage to do without my education at Purdue.  I believe that the ENTR Certificate program can give that gift to each and every student that goes through it.”

If Purdue students would like proof that entrepreneurial dreams do come true, it can be found in the form of a tasty personal, made to order pizza at the new Azzip Pizza in Lafayette, located on Farabee Drive.