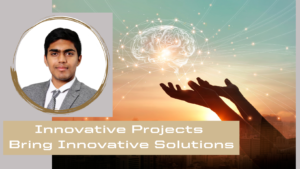 Student projects are a vital part of the entrepreneurship and innovation curriculum. They give students the opportunity to put their ideas into action, gain valuable feedback, and pivot on the final product. Often student projects come with challenges that could benefit from external expertise and input. ENTR student, Reyvant Tambi, and Guarang Vinayak created a student project called BrainChild to help overcome a problem that he often encountered with his projects.

BrainChild emerged from a disconnect that Reyvant noticed after talking to several students and observing others. He realized that there were smart students searching for opportunities to get involved in entrepreneurial projects, and amazing projects looking for students to get involved. He experienced this himself. He would have an idea and he would find himself struggling to look for someone who would be interested in working on it with him. This is when he came up with the idea for an online platform that could serve as a matchmaker for people and projects. His goal is that BrainChild will bring more ideas to life, by enabling people to work together, rather than alone, towards the vision.

Reyvant is a Senior in the College of Engineering and Guarang is a Senior in Purdue Polytechnic Institute. Prior to BrainChild, Reyvant was never really invested in what he was doing. He was always semi-involved in multiple projects while trying to find other things in which to get involved. A startup was never really part of his plans, nor was a corporate job. However, things changed drastically when he and Gaurang started working on BrainChild. He discovered the power that lies in passion and a sense of purpose. It still surprises him what an idea can do to your plans.

Before working on BrainChild, Gaurang and Reyvant had participated in a couple of entrepreneurial competitions. An interesting idea that they worked on was creating an AirBnB model for short and long-term storage for students. They named the idea Helping Hands and won two startup competitions, including Google Techstars Startup Weekend and Crossing State Street organized by the student organization, the Anvil.

In September 2019, they started exploring Brainchild through the university incubator program, called Firestarter. During the program, Reyvant says they primarily went over market research, customer validation and made some pivots based on the insights that they gathered. That year, they also participated in the Burton D. Morgan Business Model Competition where they came in 3rd place and won $10,000 to execute their idea.

Today, BrainChild is an online innovation community for students, professors, and staff at Purdue to connect with one another, work on interesting ideas and projects, and find passionate students. Their mission with this student project is based on a belief that students have the power to create world-changing innovations, and should have as many opportunities as possible to do so while in college. They want to promote student entrepreneurship and innovation by reinforcing students’ interest in building teams and taking their ideas to the next level.

Both founders believe that a university is the best place to develop entrepreneurship, innovation, and teamwork skills. With BrainChild, they hope to help students collaborate easily. Among 40,000 students they feel that there are many with similar passions, who would like to collaborate.

If you are looking to connect with other students, their projects, or have a project of your own, check out BrainChild https://www.yourbrainchild.co/.