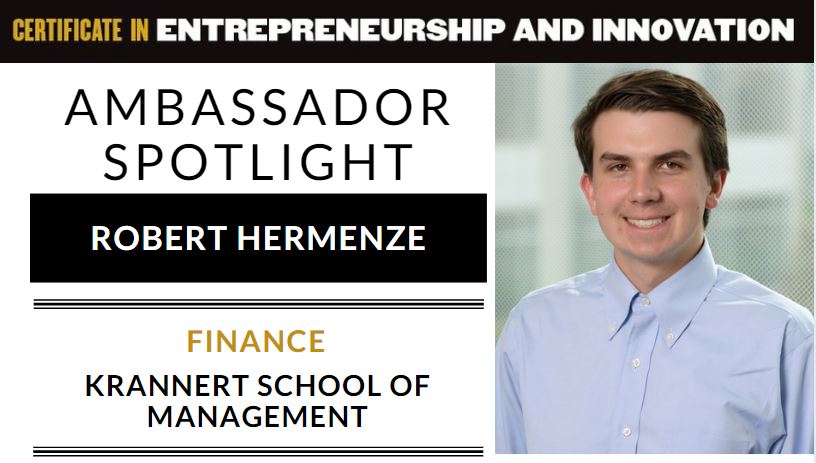 Purdue’s Krannert School of Management and ENTR Senior, Robert Hermenze is excited to begin his life as a Purdue alumnus. However, before he receives his Purdue diploma and ENTR Certificate in May and moves to New York City to begin his position at Willis Towers Watson as a Compensation Analyst, he is taking some time to reflect on how much he has grown during his time at Purdue.

Robert, a native of Redding, Connecticut, originally came to Purdue to study a passion of his, Horticulture. During his junior year of high school, Robert had combined his gardening hobby and entrepreneurial spirit and started a small plant-sales business. Two years later he had successfully grown his business, but it was time for Robert to become a Boilermaker.

During his first year at Purdue his College of Agriculture advisor introduced Robert to the Certificate in Entrepreneurship and Innovation Program where he discovered the opportunity to learn more of the skills needed to help his, or any company he might work for, grow. At Purdue he has taken five entrepreneurship courses, including two capstones, and is an active Ambassador for the ENTR program. “The skills and knowledge gained from the ENTR Certificate Program have already had a positive impact on me personally and professionally. The critical self-reflection that occurred in many of my ENTR courses (especially ENTR 480) has pushed me to continually improve my self-awareness, self-confidence, and interpersonal skills.”

During his sophomore year Robert decided to change his major to Finance to provide him a broader range of options in the business world. Still passionate about Horticulture, Robert has stayed involved with Purdue’s Horticulture Society, serving as Secretary, Vice President, and currently President. He has also worked as a horticulture intern at Hollandia Nurseries, a finance intern at Summit Trail Advisors and a corporate compensation intern at Frontier Communications.

As Robert prepares to leave Purdue he is excited that he has been able to give back to the place where he has grown and developed as a leader and an entrepreneurially-minded thinker. Through his time as a ENTR Ambassador, Robert has enjoyed sharing his experiences at Purdue with perspective students. “Being an ENTR Ambassador has allowed me to contribute to the future success of the Certificate Program by sharing the vast benefits that it has had on my personal and professional life. Knowing that I have made this contribution, has helped make my Purdue experience much more meaningful and memorable.”

Robert Hermenze is a Boliermaker to watch as he takes his next steps in the world of consulting in New York City.