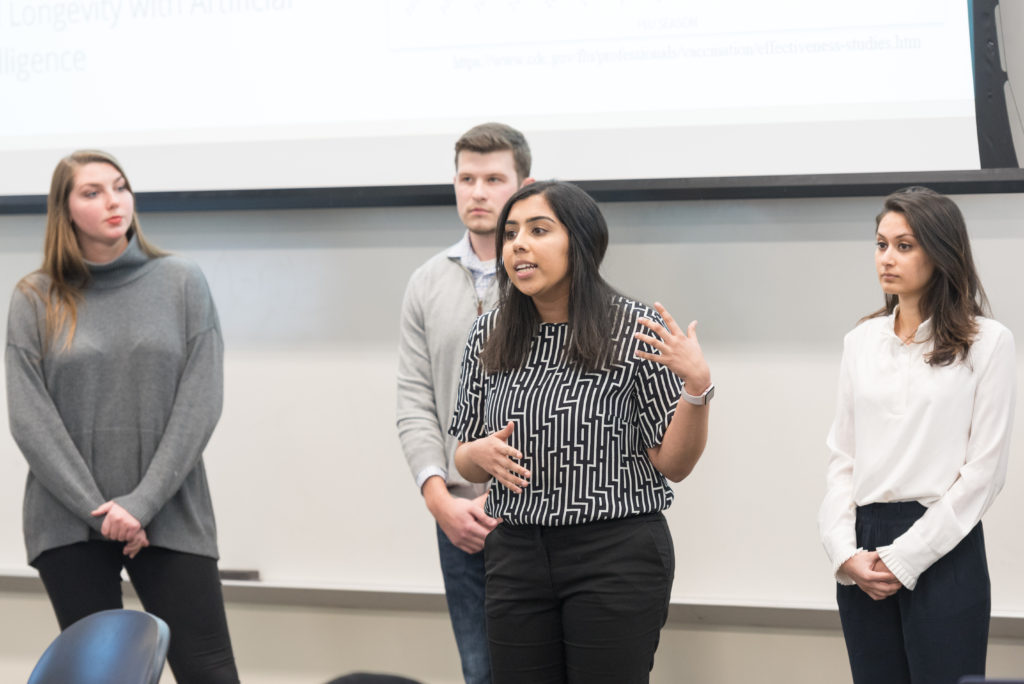 Netra Pradhan, ENTR 48000 Capstone Student and Computer Science major, speaks about her team’s plan to improve health and longevity through the use of artificial intelligence. (Purdue University/Bradley Milstone)

As the Certificate in Entrepreneurship and Innovation Program wrapped up its February spotlight month as part of Purdue’s 150th Anniversary campaign, students in the ENTR 48000 Entrepreneurship Capstone class presented innovative ideas on how to solve challenges in areas such as: sustainability of the planet, space exploration and health and longevity, with some using artificial intelligence as part of their solutions.

Eight teams of students were inspired earlier in the month by an alumni panel, which featured speakers on the Ideas Festival themes of Artificial Intelligence, Sustainable Economy & Planet, Health & Longevity and Space Exploration. Capstone students heard from Certificate in Entrepreneurship and Innovation alums who run their own companies or work for large corporations, including Tesla and Northrop Grumman. The alumni encouraged the capstone students to think about ways they can make an impact in these areas.

Following the alumni panel, the students were given a “flash presentation” assignment requiring them to develop a new idea, product, service or research proposal in one (or more) of the four Ideas Festival areas. The premise was that each team represented a company and were charged with the responsibility of coming up with an idea their company could pursue. One hour later, each team made a presentation to the entire class followed by a question and answer session.

“The purpose of a flash presentation is about performing under pressure with a group of people while getting a message across to an audience. After Purdue, most of these students will be in careers where they will need to work with a team of people to solve problems in a limited amount of time. We also wanted students to engage with the Giant Leaps Ideas Festival themes. It was a way for the students to use all they have learned in previous ENTR courses and a chance to work on an important issue that will result in a “giant leap” for mankind. We wanted them to have fun, be creative, and think big!” said ENTR Co-Instructor Susan Woods.

After the flash presentation, students were given one week to further develop and improve their idea and presentation, taking into consideration the comments and suggestions provided during their initial presentations.

The ENTR 48000 capstone students certainly rose to the challenge and came up with some innovative solutions to some of today’s most pressing challenges. One team focused their efforts on ways to determine effectiveness of vaccines in changing viral and bacterial outbreaks through the use of artificial intelligence. Netra Pradhan, an ENTR student and Computer Science major worked on this team and stated of the class project experience, “It was really nice to create a product based off one of the Ideas Festival areas. We have heard speakers discuss their achievements in these areas and creating a theoretical product that could help societal advancements showed us the endless possibilities and opportunities there are. Also, in my group, many majors were represented. It was a challenge to find a solution to a problem where everyone with their backgrounds could contribute. However, with continuous discussion on the solution, we were able to create a product that combined everyone’s major. It was a great experience in working with people with various backgrounds to create a strong solution.”

Other projects included ones focusing on creating a more sustainable planet through the use of artificial intelligence, such as making a “Smart Office” that reduces energy waste in larger buildings; and an AI driven water cleaner or “Roomba of the Seas” that will help eliminate plastic waste in the ocean.

Other teams focused on creating a more sustainable planet by partnering with a large retail outlet to collect electronic goods that could be recycled, and one team proposed manufacturing modular, smart and eco-friendly shipping container homes. One team even developed a plan to help create a more sustainable planet by growing crops in space for human consumption, which would allow for longer and further missions in space, and possibly even allowing for life on other planets.

Two teams focused on developing artificial intelligence to improve quality of life, including an app that helps calculate risks of individuals who trade stocks, which may reduce risk for novice traders. Another team developed an idea for a self-driving pod through the use of autonomous technology. City travelers would use these pods for fast/efficient modes of travel.

Overall, the ENTR 48000 “Giant Leaps” Assignment was able to engage undergraduate students with the Ideas Festival areas and encourage them to think about the positive impact they can have on all of our futures. Greg Finch, Co-Instructor of ENTR 48000 echoed these sentiments by saying, “The Purdue ENTR 48000 students honored those who took 150 Years of Giant Leaps before them by building on their ideas for future possibilities in the next 150 years.”