Dianne Dwiggins Jones (71), a remarkable and beloved elementary music teacher, passed away peacefully on Thursday, March 1, 2018, at home in Lafayette, Indiana surrounded by her husband, Max Jones, son, Gavin Jones, family and friends.  Dianne was born with a congenital heart defect and for the last five years, although she struggled with advanced heart failure, continued to enjoy and live her life to the fullest.

Dianne was born in Winchester, Indiana on February 1, 1947, to Phyllis Ann Dwiggins and the late Donald Dwiggins, where her love of music began and was nurtured in the Dwiggins household. Guided by their father, Dianne and her brothers often sang and performed together at home and at local venues.  The “Dwiggins kids” continued to participate in music in high school and sang in many of the school’s musicals, including Annie Get Your Gun, Oklahoma and South Pacific, where Dianne played major roles. After high school, they continued singing, with three of the siblings entering college as music majors.

Dianne graduated from Lee L. Driver High School in 1965.  She continued to pursue music at Ball State University, where she graduated as a voice major with a B.S. in education in 1968 and later earned a M.A. in music in 1976.

Dianne met Max when they were assigned an instrument locker to share in the music building at Ball State in the Fall of 1966.  The two became fast acquaintances and as time went on, Max was able to persuade her that he should be the love of her life. On July 13, 1968, Dianne and Max were married at College Avenue Methodist Church in Muncie, with Max’s father, John Paul, officiating.

Dianne began her teaching career as an elementary music teacher in Parker City and Farmland, Indiana and also later taught at Eaton, Winchester and Concord Schools in Elkhart.  Over the 30+ years of teaching vocal music and assisting Max with his Indiana high school marching bands, Dianne touched an overwhelming number of students who have reached out, even in recent months, to share their heartfelt memories. A common theme is the recognition of Dianne’s dedication to teaching, enthusiasm for life, positive energy, love of all children, and commitment to the pursuit of happiness through music.  Families, parents, colleagues and students consistently thanked Dianne for the extra effort and significant contributions she made year after year.  Apparent to everyone who met Dianne was the standard of excellence she brought to everything, from Spring and Christmas programs to Circle the State with Song to marching band rehearsals, and even her famous Halloween witch cackle that delighted teachers and students alike.

Dianne retired from teaching in 2007, when she and Max moved to Lafayette permanently to be closer to Purdue University for Max’s appointment as Assistant Professor of Bands.

Over the years in Lafayette, Dianne made many close friends through the Purdue Women’s Club and maintained an active social calendar with the Green Plate Society, Concord Eastside’s Best and the Directors Dinner Bunch.  She loved eating out with Max and all of their friends, as she happily boasted achieving a lifetime goal of never having baked a pie!  She also enjoyed spending time directing a number of remodel projects of the Lafayette home, which she recalled was purchased by Max without her input.  As she would explain to you, she spent the required time making an unacceptable home into the beautifully acceptable one that we all know and love today.  Dianne was thankful for every visitor that came to their warm Lafayette home, but she and Max were especially grateful for all of the Purdue band “’kids” that came by to help on various home projects over the years.

Dianne and Max approached life as a team, whether it was music, family or community.  Together, they were members of the United Methodist Church for her entire life.  While Dianne spent a significant part of her life committed to music and education, she and Max always put family first.  Dianne recalled her break from teaching while Gavin was young as the most wonderful time.  Dianne and Max loved to travel all over the US and neighboring countries, Canada and Mexico, including frequent visits to Lake Norris, Tennessee, where they spent time with their family and best friends in cabins, on houseboats or at their condo over the past 30 years.  Following Dianne’s retirement, they also traveled to England, France, Spain, Italy, Turkey, Greece, and Germany with Dianne’s last international adventure taking them to Hong Kong this past Spring, where Gavin and his wife, Erika, currently reside.

Dianne will be most remembered for her exceptionally beautiful singing voice, her passion for music, her humor, her love of shopping, her fashion sense and most of all, her radiant smile that lit up any room.

A Celebration of Dianne’s life will be held at the Towne Square Community Centre at 123 W. Franklin Street on Saturday, March 31, 2018 in Dianne’s hometown of Winchester, Indiana. Visitation will begin at 1pm until the start of the service at 3pm. All are welcome to attend and share in this public celebration to honor Dianne’s legacy.

At the family’s request, in lieu of flowers, memorial charitable contributions are preferred and may be made to the Max and Dianne Jones Memorial Music Lesson Scholarships Fund (for Winchester Community High School Band & Choir Students) c/o Community Foundation of Randolph County, 213 South Main St., Winchester, IN 47394, www.randolphcountyfoundation.org.  Checks should be made payable to the Community Foundation of Randolph County. Please note Dianne Jones on the memo line. 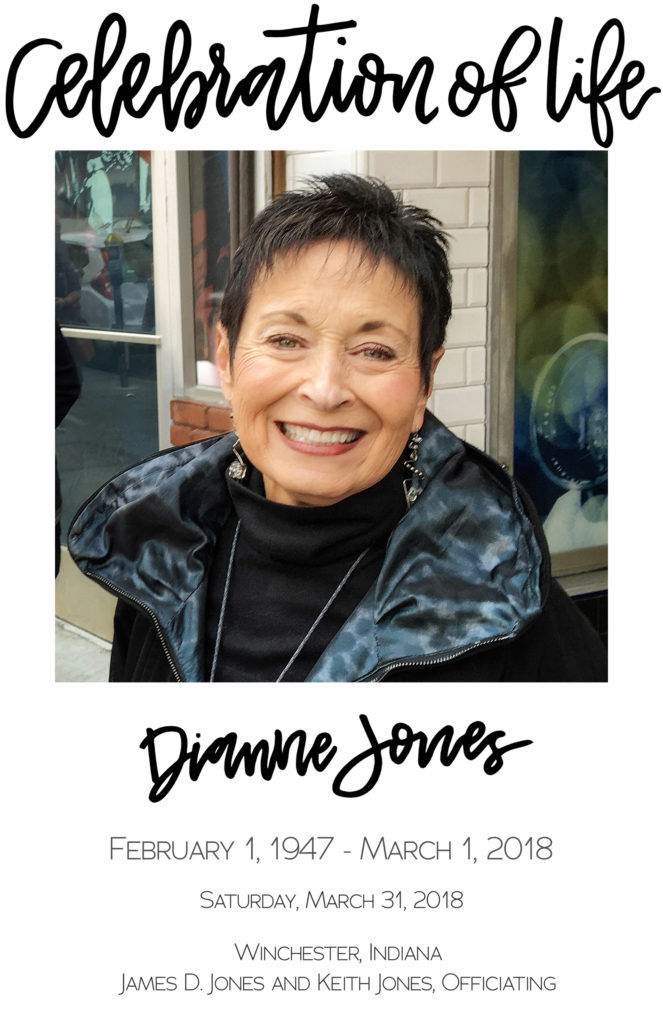