Following a demanding audition process, the Purdue “All-American” Marching Band announced last weekend that Lorin Nugent and Jonathan Heidegger will serve as the Drum Majors for the 2021-22 season. The two will lead the Band to carry on its tradition of excellence through athletic events and thrilling performances.

Lorin is a senior from Champaign, IL majoring in Aeronautical and Astronautical Engineering. He has played tenor drums and served as a student leader and Drum Major in the AAMB. He also plays flute in the Purdue Wind Ensemble.

Jonathan is a junior from Brownsburg, IN majoring in Computer Science with a minor in German. He has played Tenor Saxophone in the Purdue Wind Ensemble, Boiler Brass, and AAMB.

As the AAMB celebrates this appointment, the Band also wishes their outgoing Drum Major, Torey Caldwell, all the best as she begins a very successful career following graduation in May. Stay tuned at www.purdue.edu/bands for further updates on the Fall 2021 season for the Purdue “All-American” Marching Band. 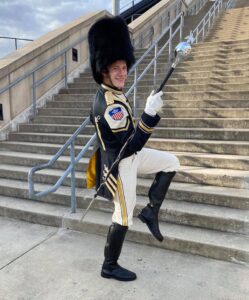 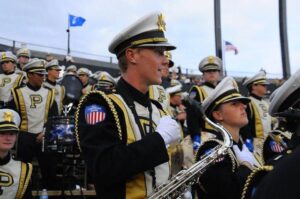