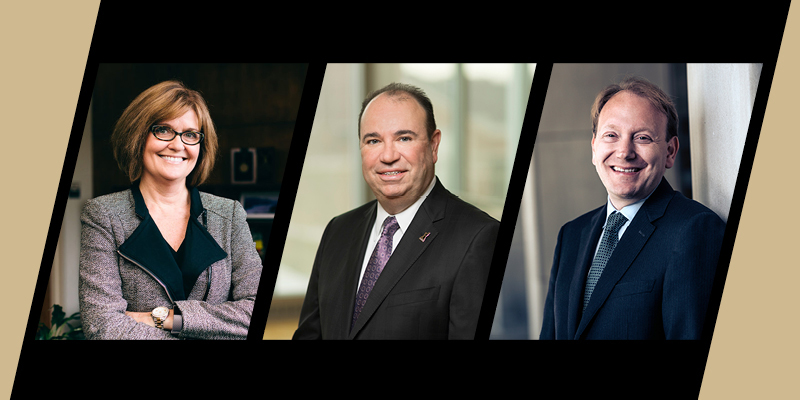 WEST LAFAYETTE, Ind – The search committee for Purdue University’s next provost has announced the selection of three finalists who will hold open forums on campus in early December.

Throughout most of the last month, the search committee carried out seven listening sessions and opened additional channels for feedback from faculty, students and staff through emails, surveys and anonymous online input.

The next provost will succeed Jay Akridge, who has held the position since July 2017, making him currently the longest-serving provost in the Big Ten. Akridge will step down at the end of 2022 to return to his faculty appointment in the College of Agriculture.

Open forums, where candidates will offer presentations and answer questions, will be held on Dec. 7-9 in Stewart Center’s Fowler Hall and will be livestreamed. Each of the three days will also be arranged so that each finalist can meet with faculty, students, staff and other leaders at the university.

Eric L. Barker is the Jeannie and Jim Chaney Dean of the College of Pharmacy and professor of medicinal chemistry and molecular pharmacology at Purdue University. He previously served as associate dean for research in Purdue’s College of Pharmacy since 2010. Barker joined Purdue in 1998 after earning his PhD in pharmacology from Vanderbilt University and completing postdoctoral research at Vanderbilt and Emory universities. He is a member of several professional associations that include the American Pharmacists Association, Society for Neuroscience, and American Society for Pharmacology and Experimental Therapeutics, where he has served in leadership positions for the Neuropharmacology Division. Barker will present Dec. 7 from 10:45-11:45 a.m. in Fowler Hall. The livestream will be at https://youtu.be/81sg3g05Hu8.

Patrick J. Wolfe is the Frederick L. Hovde Dean of the College of Science and the Miller Family Professor of Statistics and Computer Science at Purdue University. He was named dean in 2017 after serving as professor of statistics and computer science and EPSRC Established Career Fellow in the Mathematical Sciences at University College London. Wolfe joined the faculty of University College London in 2012 after teaching at Cambridge and then Harvard. Wolfe graduated from the University of Illinois in electrical engineering and music in 1998, with a 2003 doctorate from Cambridge, where he held a National Science Foundation graduate research fellowship. Wolfe will present Dec. 8 from 10:45-11:45 a.m. in Fowler Hall. The livestream will be at https://youtu.be/YuRXtPazpHE.

Marion K. Underwood is the Dean of the College of Health and Human Sciences at Purdue University and Distinguished Professor of Psychological Sciences. She joined Purdue in August 2018 from the University of Texas at Dallas, where she served as dean of graduate studies and associate provost. Underwood graduated from Wellesley College with a bachelor’s degree in psychology in 1986. She received her master’s and doctoral degrees in clinical psychology from Duke University in 1987 and 1991, respectively. Underwood began her professional career in 1991 as an assistant professor of psychology at Reed College in Portland, Oregon, where she earned tenure before moving to the University of Texas at Dallas in 1998. Underwood will present Dec. 9 from 10:45-11:45 a.m. in Fowler Hall. The livestream will be at https://youtu.be/7PGuj3B3wa4.

A webpage has been set up to capture information related to the provost search. Following the candidate forums, recordings of each will be made available on the webpage, and the campus community will have an opportunity to provide feedback through a survey. Feedback is due by noon Dec. 12.

Note to Journalists: This story has been updated to reflect corrected dates for the open forums.