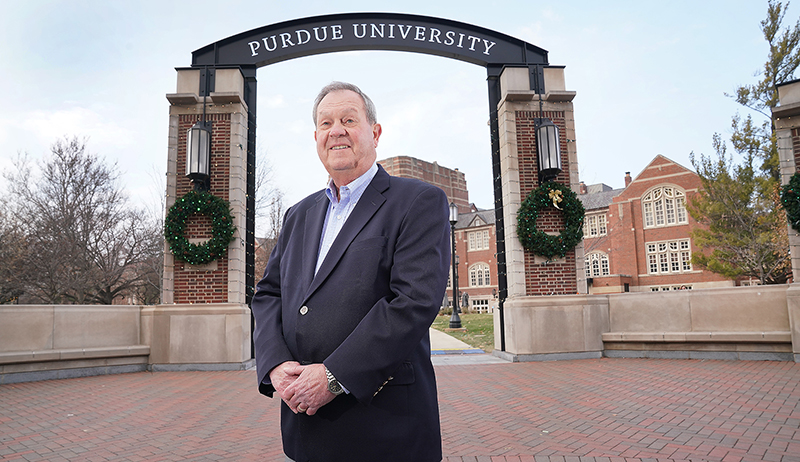 WEST LAFAYETTE, Ind. – The 2022 Frederick L. Hovde Award of Excellence in Educational Service on Saturday (Dec. 17) was presented to John Baugh, director of agricultural services and regulations for the Purdue University College of Agriculture, in recognition of a 50-year career dedicated to serving Indiana residents.

Baugh’s career began in 1972 when he took a job with Indiana Farm Bureau’s commodity and legislative departments lobbying for and promoting agriculture through livestock, carcass evaluation and meat programs. Since joining Purdue’s College of Agriculture in 1995, his work was also behind legislation involving hemp production, pesticide regulations, and research and Extension funding.

In his nomination letter, Mark LeBlanc, Indiana state chemist and seed commissioner, wrote that he has witnessed Baugh’s influence and impact at the Statehouse and with industry partners.

“His understanding of current laws and regulations paired with his willingness to listen to the needs of stakeholders across the state allows my office and others to build and implement programs that are impactful,” LeBlanc said. “I do not think there is a community across the state that John has not visited or helped at some point in his career.”

“He emulates the same commitment to the well-being and progress of rural Indiana as President Hovde did over his 25 years as president of Purdue University,” Reed said. “I have yet to meet an individual at Purdue who knows Indiana as well as John.”

Baugh said receiving the award is humbling and noted his career achievements have been in part due to people from all over the state working together toward a common goal.

“This is a very prestigious award, and I am very honored to receive it,” Baugh said. “A fantastic bunch of folks have received this same award over the years, all serving Indiana well, and to be included in the same group of them is a great honor.”