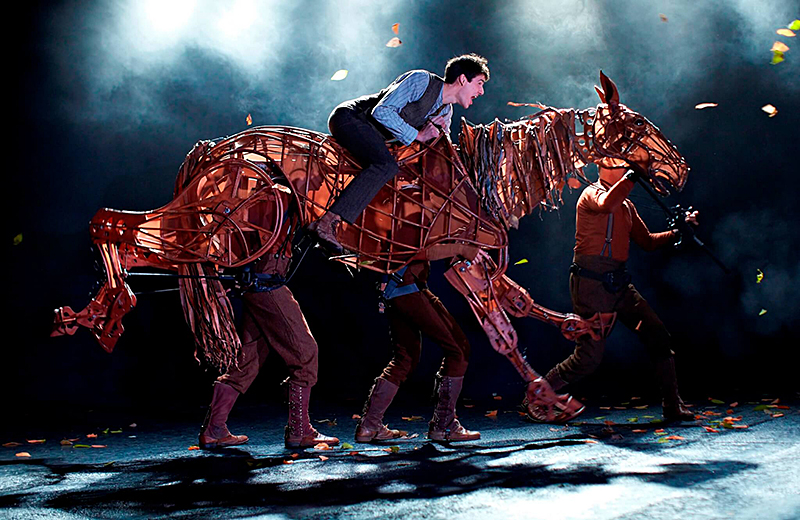 WEST LAFAYETTE, Ind. — Purdue Convocations will present a return to the theater this coming spring with a lineup of innovative performances from around the world, including a repertory theatre residency, thought-provoking lectures, award-winning musicians, family-friendly engagements, Broadway musicals and an end of season dance party.

“We have loved animating campus with outdoor spectacles and special projects this fall, and now we’re excited to welcome fans back into our venues for a dynamic spring season,” said Todd Wetzel,  assistant provost for student life and Purdue Convocations executive director. “It has been so gratifying to see how audiences have embraced our creative approach to keeping the performing arts a vital part of the Purdue experience.”

This announcement is the second of a two-part season launch. The fall series was previously launched. The spring traditional in-theater performance series was announced at a special edition of the Convocations Party of the Season on Thursday (Oct. 7) in the Purdue Memorial Union South Ballroom.

“We’re eager to get back into the theater with the collaboration of our campus and community partners and the generosity of our corporate supporters and Friends of Convocations,” Wetzel said.

Four of the previously announced fall series events are currently available for purchase or free RSVP. The newly announced spring events are available to purchase during the Friends of Convocations presale now through Oct. 18. General public individual performance tickets go on sale at 10 a.m. ET Nov. 12.

Friends of Convocations members choose seating before the general public using the priority points system. Donations of $50 or more qualify for priority seating and other perks, and provide crucial support for performances, education, outreach and special programs. Patrons may add a gift with their ticket order to immediately receive the priority points-seating benefits or visit convocations.org/friends.

Friends of Convocations presale orders must be received by Oct. 18 for both PICK5 discounted subscriptions and single show tickets.

The 2021-22 Purdue Convocations upcoming events include:

In a contemporary update of Shakespeare’s gripping familial tragedy, the legendary Sir Ian McKellan delivers a masterful turn as the aging king seized by madness. National Theatre Live delights audiences worldwide with the best of British theatre. Its cinematically enhanced presentations of storied stage plays are delivered to cinema screens around the world, and now to Purdue’s campus. Tickets now available.

Based on the 1982 novel of the same name, “War Horse” is a powerful epic set during World War I. At its heart are the astonishing life-size puppets by South Africa’s Handspring Puppet Company. National Theatre Live delights audiences worldwide with the best of British theatre. Tickets now available.

Using more than 100 paper puppets, an original musical score, dramatic lighting and a unique cast of performers, this story of Ebenezer Scrooge will transcend your screen. Convocations is proud to reprise this critically acclaimed 2020 performance as a free gift for the holidays! Free with registration.

With influencers ranging from John Coltrane and Ornette Coleman to Prince and The Police, Joshua Redman has forged a signature saxophone sound as provocative and forward-looking as it is hard-swinging and soulful. Propelled by bassist Reuben Rogers, drummer Gregory Hutchinson and pianist Aaron Goldberg, Redman’s Grammy-nominated quartet generates a tight, joyous onstage alchemy that will serve as an amazing kickoff to the 2022 Purdue Jazz Festival. Advance tickets available.

The enchanting harmonies of Paul Simon and Art Garfunkel created timeless hits like “Mrs. Robinson,” “Bridge Over Troubled Water” and many others. Through artful image projection, rare photos and video, and a live band performing their classic songs, “The Simon & Garfunkel Story” presents a multimedia experience that ensures audiences can celebrate the storied duo today just like they did at their 1981 Central Park reunion concert. Advance tickets available.

New Zealand-born and American-raised violinist Geneva Lewis emits passion for music on and off stage. Since her professional debut at just 11 years old for the Pasadena Symphony, she continues to earn national accolades with her beloved Stradivarius violin believed to have been crafted in 1714. At Purdue, she will revel in the impressionism of Debussy’s “Violin Sonata” and the romantic power of Brahms’ “Sonata No. 3 in D minor.” Advance tickets available.

Named after the Icelandic word for darkness, “Dökk,” by the Italian studio fuse*, synthesizes real-time data from the score, the performer’s movement and heartbeat, and emotional analysis of current social media trends. The visualized data is projected in stunning 3D to create an emotional, one-of-a-kind performance. Both experimental and empirical, “Dökk” illuminates connections among us in an immersive fusion of light, sound, space, and movement. Advance tickets available.

Purdue audiences met vocalist and banjoist Abigail Washburn in 2019. Now, Washburn will introduce us to her Nashville neighbor, Wu Fei, a prodigy on the 2,000-year-old traditions of the Chinese zither known as the guzheng. Wu and Washburn’s intimate, multilingual collaboration of global folk offers a cross-cultural trek from the Appalachian Mountains to the Xinjiang prairies that magnifies the beauty of experiences that transcend traditions. Advance tickets available.

“Charlie and the Chocolate Factory”

Roald Dahl’s beloved sugar-slinging CEO Willy Wonka comes to life in  “Charlie and the Chocolate Factory.” This new Broadway musical follows the classic tale of a young boy and the mixed bag of meeting his candy-making hero. This stage adaptation features songs from the 1971 film—like “The Candy Man” and “Pure Imagination”—surrounded by a new score from the composers of “Hairspray” that’s sweeter than 70 Everlasting Gobstoppers. Advance tickets available.

Presented by TEDxPurdueU and Purdue Convocations

Distress. Rebirth. Enlightenment. “Modern Renaissance” will explore the dynamics of the social, cultural, and political world postpandemic, and how science, art, history, and social justice will reemerge in its wake. In this independently organized TED event, TEDxPurdueU presents this daylong event which will span a variety of fields through talks concisely presented in under 18 minutes for a fast-moving, educational and exhilarating experience. Advance tickets available.

It’s no surprise that the family-friendly music of singer-songwriter Sonia De Los Santos ignites instant happiness. Specializing in bilingual songs that captivate children, parents and grandparents alike, De Los Santos’s tunes blend Latin American styles from Mexico, Peru and Colombia. These free, upbeat performances will showcase songs from her album “Esperanza,” which is Spanish for something we can always use more of — hope. Free with advance registration.

F. Scott Fitzgerald’s “The Great Gatsby” remains a vivid account of how, in the absence of true equality, pursuing the American dream can lead to devastating effects. Known for their powerful immersion in classic texts, New York City’s Aquila Theatre brings a relevant reimagination of this classic in which “Gatsby” is a man of color, setting the stage for themes of class, racism and discrimination to play vividly inside the meaning of the American Dream. Advance tickets available.

Imagine a tragic tale about the physical and psychological toll of political ambition and power-mongering. Does that sound eerily current or is it simply that the themes of Shakespeare’s “Macbeth” remain eminently applicable after 400-plus years? New York City’s Aquila Theatre makes the relevance surprisingly fresh with their creative vision of this classic. This electrifying rendition is keenly aware that a certain sound and fury persists. Advance tickets available.

The New York Times hailed Italian pianist Beatrice Rana as “one of the most insightful and prodigiously gifted artists of the new generation.” She has since earned the Silver Prize at the prestigious Van Cliburn competition, headlined Lincoln Center, Carnegie Hall, and venues worldwide. Rana’s performance at Purdue includes four scherzos by Frédéric Chopin, Claude Debussy’s “Études, Book 1,” and an excerpt of Igor Stravinsky’s “Petrushka ballet.” Advance tickets available.

Before she became a household name with her hit debut album “Tapestry,” Carole King penned a slew of 1960s hits for pop, R&B and rock royalty, including “(You Make Me Feel Like) A Natural Woman” for the “Queen of Soul “herself, Aretha Franklin. “Beautiful: The Carole King Musical” tells the inspiring true story of King’s remarkable rise to stardom. Along the way, she made more than beautiful music, she wrote the soundtrack to a generation. Advance tickets available.

In an exclusive salon engagement, German Tabea Debus (recorder), along with Alon Sariel (lute), will present the remarkable sonic exploration, “Ohrwurm, “which is German for “earworm.” From the recorder’s 15th century origins to the present day, Debus examines how melodies of every era transcend place, form and time in a program that will take you on a journey to fill your ear — and soul — with music to remember. Advance tickets available.

Meet “Jenna,” a waitress and expert pie-maker who dreams of escaping a small-town life and rocky marriage. After entering a baking contest and enjoying a run-in with someone new, Jenna discovers change is on the menu if she can create her own recipe for happiness. Developed by an all-female creative team, “Waitress” is the Tony-nominated smash-hit Broadway musical featuring original music and lyrics by Grammy-nominated singer-songwriter Sara Bareilles. Advance tickets available.

In “Home Within” by Silkroad, Syrian clarinetist Kinan Azmeh and Syrian-Armenian visual artist Kevork Mourad created an audiovisual meditation on loss, longing and the tragedy of Syrian conflict that has claimed over a half-million lives. “Home Within” includes cello, percussion, voice and oud—melding music and real-time image-making. The work is both haunted by history and buoyed by the hope that those who still seek home will soon discover it. Advance tickets available.

Following a successful engagement at Purdue in 2018, the Broadway musical sensation “Jersey Boys” returns in all of its harmonious glory. The musical tells the story about the formation and success of Frankie Valli and the Four Seasons, but the spotlight shines brightest on all of those classic tunes from the early 1960s — “Sherry,” “Big Girls Don’t Cry” and “Walk Like a Man,” — all led by Valli’s unmistakable falsetto. Chronicling the group’s rise from New Jersey street kids singing on the corner to the Rock ‘n’ Roll Hall of Fame, “Jersey Boys” is a living, breathing jukebox stocked with great hits and heart.

Getting back together for a season of live performances is a reason to celebrate at the Convos End of Season Bash! Move and groove all night to the Afrobeat and jùjú rhythms of Brooklyn’s Super Yamba Band. Led by African guitar virtuoso Kaleta, who has toured and recorded with Fela Kuti, Lauryn Hill and King Sunny Ade, this band will definitely fuel your shuffling feet and build momentum into the next Purdue Convocations season! Advance tickets available.

Initiated in 1902, Purdue Convocations was one of the first professional performing arts presenters in the United States. Each year, Convocations offers the region 30-40 performances of widely varying genres: Broadway-style shows, theater, dance, children's theater, world music, jazz, and chamber music, along with rock, pop, country and comedy attractions. With a vision for connecting artists and audiences in artistic dialogue and for drawing in academic discourse, Purdue Convocations aims to promote frequent exposure to and familiarity with human cultural expression in a multitude of forms and media.