"Am I going to glow in the dark? Will I be green?" she asked him.

Her surgeon explained that when viewing the cancer site, the cancerous lesions would be illuminated with near-infrared light during surgery.

Using this approach, her surgeon was able to find a hidden tumor that would have otherwise gone undetected. Giandonato was one of the first patients for a new drug designed to help surgeons find ovarian cancer tumors and cells — that imaging agent was just approved Monday (November 29) by the U.S. Food and Drug Administration. 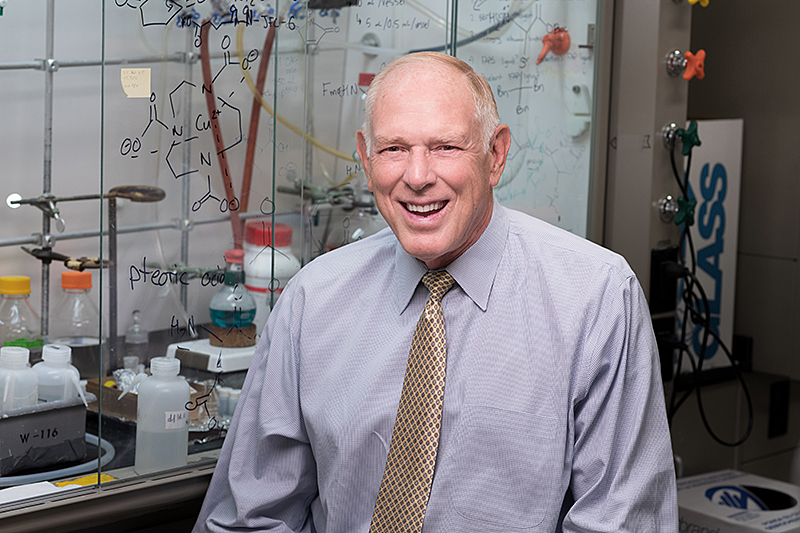 A new drug just approved by the FDA will allow physicians to identify additional cancerous lesions, which otherwise would have been left behind, in up to 27% more patients during ovarian cancer surgery. Philip Low, Purdue University's Presidential Scholar for Drug Discovery and Ralph C. Corley Distinguished Professor of Chemistry, was an inventor. (Purdue University photo/John Underwood) Download image

The imaging agent is delivered via an IV injection between one and nine hours before the surgery for ovarian cancer. The fluorescent imaging agent binds to the cancer cells, allowing surgeons to find additional tumors in 27% of the patients, which would have otherwise been left behind, according to results of the Phase 3 clinical trial.

The drug is the first tumor-targeted fluorescent agent for ovarian cancer to be approved by the FDA.

Philip Low (rhymes with "now"), Purdue University's Presidential Scholar for Drug Discovery and the Ralph C. Corley Distinguished Professor of Chemistry in the College of Science, is an inventor of the drug. He said that when a surgeon turns on the near-infrared light used in surgery, "Those lesions light up like stars against a night sky."

"In the pivotal ovarian cancer trials, surgeons were able to find additional malignant tissue or improve the practice of surgery in 27% of all the patients," he said. "It seems to me that future surgeries are going to very heavily rely on this technology."

Giandonato, who lives in Runnemede, New Jersey, said that when she was diagnosed in 2012, her primary care physician told her, "'Carol, it's really serious. You're filled with tumors. And it's cancer.'

Giandonato's oncologist and surgeon, Dr. Janos L. Tanyi, associate professor of obstetrics and gynecology at the Hospital of the University of Pennsylvania, was the principal investigator in the Phase 3 study of the imaging agent.

"My doctor explained to me that he would inject a fluorescent dye and would use a special light to look for other nodules that were not present on the CT scan," she said. "And lo and behold, he found a hidden nodule and was delighted."

The drug works by molecular jujitsu. Cancer cells divide rapidly, much faster than normal tissue. To do this, they need folate, a type of B vitamin — and the cancer cells are ravenous for it. Low's innovation was to tag a folate compound with a fluorescent dye and administer it intravenously to a patient before the surgery.

"Cancer cells have an enormous appetite for this vitamin,” Low said, “and we exploited their greed for folic acid by attaching a fluorescent dye to it."

Low says the fluorescent imaging agent can allow surgeons to be more precise.

"Cancer lesions are often removed very crudely by cutting large margins around that cancer tissue and resecting a lot of healthy tissue,” he said. “That can often be damaging to the patient, especially when the healthy tissue is very valuable — and in most cases it is."

Dr. Leslie Randall, professor of gynecologic oncology at the Virginia Commonwealth University School of Medicine, was among those who tested the drug during the clinical trials.

"In the 21st century, there ought to be better ways to image tumors, to see a tumor," she said. "I think any patient who's facing a surgery would want their surgeon to have a way to see their tumor better and to be able to better know with certainty that the tumor is out."

In an analysis of a subgroup of patients during the clinical trials with patients who underwent surgery following chemotherapy (which is called “interval debulking surgery”) use of the imaging agent allowed additional cancer to be found in 40% of patients. However, because of the small size of the group, a representative for On Target Laboratories said, "These results may be overstated and should be interpreted cautiously."

Randall is optimistic about this use.

"We need this. We want this,” Randall said. “There might be applicability to robotic surgery in the future, which is where a lot of us are taking our interval debulking surgery. Especially in the interval debulking setting, where the tumor has been treated with chemotherapy and you're not sure not sure what's still a viable tumor. I think it can be really helpful in that situation."

Chris Barys, CEO of On Target Laboratories, says the imaging agent is just the first of the fluorescent imaging drugs developed at Purdue undergoing testing.

"Dr. Low's vision didn't stop at just one molecule. We believe we have the opportunity to develop a portfolio of molecules," he said. "We are currently evaluating an imaging agent for detecting lung cancer in a phase 3 trial.

"Beyond that, we have an ongoing trial for prostate cancer, and we are also making strong progress in the research lab for colon cancer. When you think about these indications, they make up approximately three-fourths of all in-patient cancer cases here in the United States."

Low says cancer surgery is moving quickly toward noninvasive precision techniques such as endoscopic and robotic surgeries, and the tumor-targeted fluorescent imaging agents will be essential for these procedures as the surgeon's use of hands to palpate the tumor site is eliminated.

"I think the technology we're pioneering is very clearly front and center in making this possible," Low said.

A YouTube video featuring Low explaining how the drug works is available.

Low conducts his research as part of the Purdue University Center for Cancer Research. The center is one of only seven basic science laboratory cancer centers recognized by the National Cancer Institute, which is part of the National Institutes of Health. The center brings together more than 110 researchers at Purdue who study cancer at the cellular level.

Low disclosed his innovation to illuminate ovarian cancer tumors to the Purdue Research Foundation Office of Technology Commercialization. OTC applied for patent protection on the intellectual property and licensed it to On Target Laboratories, which is based in West Lafayette, Indiana. Low is the founder and chief science officer of On Target Laboratories.

According to a statement from On Target Laboratories, the most common side effects of Cytalux reported in clinical trials were nausea, vomiting, abdominal pain, flushing, indigestion, chest discomfort, itching and allergic reaction during administration or infusion (see additional important safety information). The majority of side effects were mild to moderate.

About the College of Science

Purdue University’s College of Science is committed to the persistent pursuit of the mathematical and scientific knowledge that forms the very foundation of innovation. Nearly 350 tenure-track faculty conduct world-changing research and deliver a transformative education to more than 1,500 graduate students and 5,200 undergraduates. See how we develop practical solutions to today’s toughest challenges with degree programs in the life sciences, physical sciences, computational sciences, mathematics, and data science at www.purdue.edu/science.

FDA approval for Cytulux is based on data from a Phase 3 registration trial, which demonstrated that in 27% of patients, Cytalux identified additional lesions which would have been left behind (N=134, 95% CI [0.196, 0.352]). In a subgroup analysis of patients with confirmed ovarian cancer who underwent surgery after chemotherapy (called interval debulking surgery), the rate was 40% of patients (N=58, 95% CI [0.270, 0.534]). This subgroup analysis utilized a smaller analysis set than the primary endpoint and was not adjusted to control for error, so the results may be overstated and should be interpreted cautiously. Patient-level false positive rate of Cytalux with near-infrared fluorescent light with respect to the detection of ovarian cancer lesions confirmed by central pathology was 20.2% with 95% confidence interval (13.7%, 28.0%).

Note to journalists: Video interviews with the sources mentioned in this release, b-roll animations, and still photos of Philip Low are available on a Google Drive. Journalists visiting campus should follow visitor health guidelines.