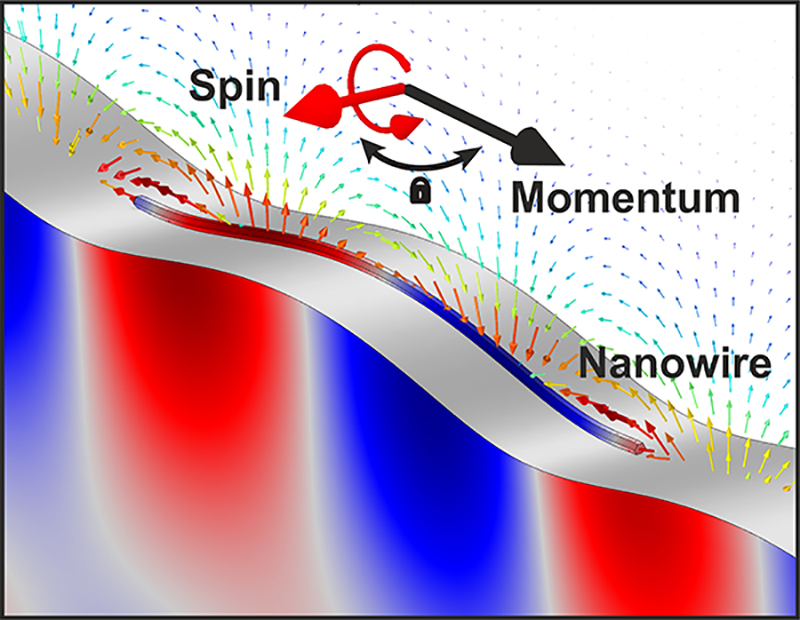 Representation of the spin of a nanoscale acoustic wave. Credit: Maximilian Sonner, Institute of Physics at the University of Augsburg

Team of researchers first to demonstrate spin of nano-sonic wave

WEST LAFAYETTE, Ind. — Researchers have detected the rolling movement of a nano-acoustic wave predicted by the famous physicist and Nobel prize winner Lord Rayleigh in 1885. This phenomenon can find applications in acoustic quantum technologies or in so-called “phononic” components, which are used to control the propagation of acoustic waves.

The team used a nanowire inside which electrons are forced onto circular paths by the spin of the acoustic wave. Acoustic waves are incredibly versatile in modern nanophysics, as they can influence both electronic and photonic systems. For example, minute micro-acoustic chips in computers, smartphones or tablets ensure that the wireless signals received are electronically processed. However, despite wide-ranging uses of nano-acoustic waves, the fundamental property of spin of the nano-acoustic wave had not been detected until this study.

“Since Lord Rayleigh’s pioneering work, it has been known that there are acoustic waves which propagate on the surface of solids and which show a highly characteristic elliptical rolling movement,” said Hubert Krenner, a professor of physics, who headed the study at the University of Augsburg and recently moved to the University of Münster. “In the case of nano-acoustic waves, we have now succeeded in observing directly this transversal spin, which is what we physicists call this movement.”

In their study, the researchers used an extremely fine nanowire that was positioned on a so-called piezoelectric material, lithium niobate. This material becomes deformed when subjected to an electrical current, and, with the aid of small metal electrodes, an acoustic wave can be generated on the material.

On the surface of the material, the acoustic wave generates an elliptically rotating (gyrating) electrical field. This, in turn, forces the electrons in the nanowire onto circular paths.

“So far we knew about this phenomenon for light,” said Zubin Jacob, Purdue’s Elmore Associate Professor of Electrical and Computer Engineering. “Now we have succeeded in demonstrating that this is a universal effect, which also occurs in other types of waves such as sound waves on a technologically important platform, lithium niobate.”

The research results presented are a milestone: The transversal spin, observed for the first time, can be used specifically to control nano-systems or transfer information.

“We observed the movement of electrons in the nanowires, which were made at the Technical University of Munich, through the light emitted by the electrons,” said Maximilian Sonner, a Ph.D. student at the Institute of Physics at the University of Augsburg.

Sonner’s colleague, Lisa Janker, added, “We use an extremely rapid stroboscope here, which enables us to practically observe this movement in real time – even at higher frequencies up to the gigahertz range.”

Farhad Khosravi, who recently completed his Ph.D. in Jacob’s research group, had transferred his calculations for light directly to the Rayleigh acoustic wave. “It has been known for a long time that light waves and sound waves have similar properties. Nevertheless, the extent of the match for their spin properties is really phenomenal,” Khosravi said.

The researchers are convinced that the universal principle of spin-physics underlying this phenomenon will lead to important technological advances. The team is now working to link the transversal spin of acoustic waves with the spin of other waves.

“What we need to do next is use this transversal acoustic spin specifically in order to manipulate optical quantum systems or the spin of light, for example,” Jacob said.

The project was funded by the German Research Foundation (grants KR3790/6-1 and KO4005/6-1) and the DARPA Nascent Light-Matter Interactions program.

Spin-momentum locking is a universal wave phenomenon promising for applications in electronics and photonics. In acoustics, Lord Rayleigh showed that surface acoustic waves exhibit a characteristic elliptical particle motion strikingly similar to spin-momentum locking. Although these waves have become one of the few phononic technologies of industrial relevance, the observation of their transverse spin remained an open challenge. Here, we observe the full spin dynamics by detecting ultrafast electron cycloids driven by the gyrating electric field produced by a surface acoustic wave propagating on a slab of lithium niobate. A tubular quantum well wrapped around a nanowire serves as an ultrafast sensor tracking the full cyclic motion of electrons. Our acousto-optoelectrical approach opens new directions in the merged fields of nanoacoustics, nanophotonics, and nanoelectronics for future exploration.