After a decade of work, Issam Mudawar will soon see the results of the largest phase change experiment ever conducted in space.

A new experiment designed by Purdue University engineers addresses both problems. The Flow Boiling and Condensation Experiment (FBCE), which arrived at the International Space Station on Thursday (Aug. 12), will soon advance the science of heat transfer in microgravity.

“Vehicles like the space shuttle used single-phase cooling, which circulates liquid through tubes to remove heat from the avionics,” said Issam Mudawar, the Betty Ruth and Milton B. Hollander Family Professor of Mechanical Engineering, and the principal investigator of the FBCE. “But these systems are complex and add a lot of weight to the spacecraft. What we’ve been exploring is using two-phase flow, which is more efficient and reduces the size of the cooling hardware.” 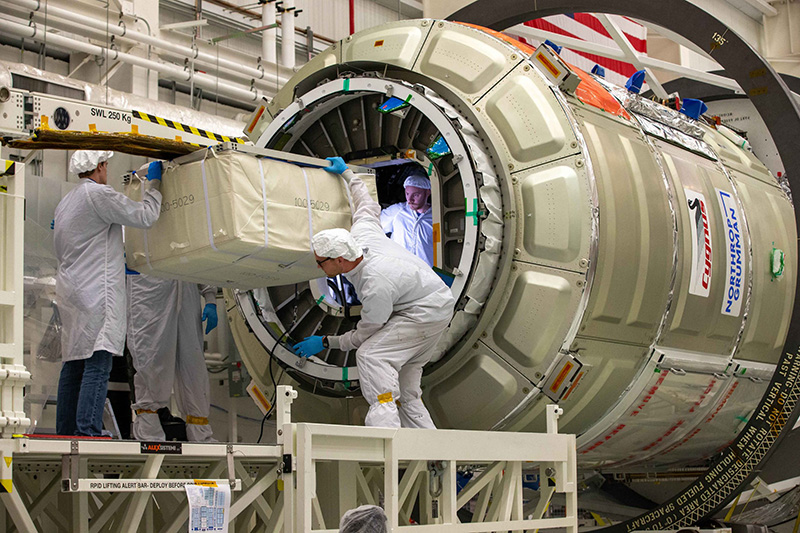 Northrop Grumman teams load cargo including an experiment designed by Purdue University researchers into a spacecraft in preparation for a rocket launch to the International Space Station. (Credit: Northrop Grumman) Download image

Two-phase flow refers to two phases of matter – liquid and vapor – that happen during boiling and condensation. In a process known as “flow boiling,” a specialized liquid flows by a heat source, which causes the liquid to boil and create bubbles. Those bubbles of vapor flow past the heat source, reject the heat, and then condense back into liquid, which recirculates constantly in a closed system.

To find the answer, Mudawar formed a research partnership with NASA’s Glenn Research Center. His team designed and built an experiment to test flow boiling and condensation in microgravity, and in 2012 the team sent it on the “vomit comet,” an airplane that simulates periods of 15-17-seconds of microgravity by flying up-and-down parabolas.

“We discovered that at certain flow rates, microgravity actually did reduce the amount of heat flux by up to 50%,” Mudawar said.

In collaboration with colleagues at Glenn Research Center, Mudawar’s team continued to tweak multiple factors in the process, and in the next few years, sent the experiment up several times on parabolic flights with Zero Gravity Corporation (ZERO-G). Purdue students were aboard to operate the equipment.

“Our goal has always been to achieve design specifications for the experiment to actually be performed in space,” Mudawar said. 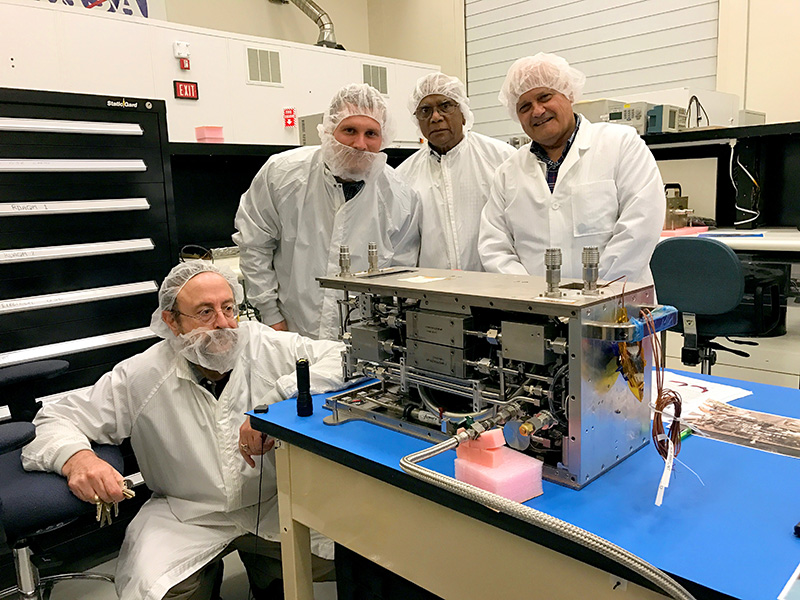 Issam Mudawar (far left) inspects one of the modules of the Flow Boiling and Condensation Experiment, which was recently launched to the International Space Station. Joining him at NASA's Glenn Research Center are (left to right) Purdue Ph.D. candidate Steven Darges and NASA’s Mojib Hasan and Henry Nahra. (Photo provided) Download image

The researchers got their wish earlier this year. Mudawar and his colleagues at Glenn Research Center had been working on a smaller version of the experiment to fit in a specific rack on the International Space Station. In March, they confirmed that this new experiment module, FBCE, had passed all of NASA’s safety and readiness reviews and was ready to be launched.

“This is no small task,” Mudawar said. “Every single structural member needs to be optimized for weight and size. Every single screw has to be evaluated and certified. It’s actually good preparation for trying to make future spacecraft lighter, which is what we’re trying to accomplish!”

On Tuesday, an Antares rocket launched from the Mid-Atlantic Regional Spaceport on Wallops Island, Virginia. Atop the rocket was a Northrop-Grumman Cygnus spacecraft carrying 3,000 pounds of supplies for the astronauts aboard ISS, as well as the FBCE and three other science experiments. Cygnus docked with ISS on Thursday. Astronauts will soon run the science equipment through operational readiness reviews and, later this year, will begin to conduct the experiment.

“This is truly a milestone for Purdue’s space research,” Mudawar said. “I’ve had 14 Ph.D. students and one master’s student work with me on this project over the past decade. And teaming up with Glenn Research Center has been a perfect partnership. This will be the largest phase change experiment ever conducted in space. Hopefully, what we learn from this experiment can be used to make future spacecraft more efficient, and enable us to go to the moon, Mars and beyond.”


Note to journalists: High-resolution visuals of the launch preparation and the researchers’ work on the experiments are available via Google Drive. Journalists visiting campus should follow visitor health guidelines.