Monkeys are less cuddly with each other when dealing with an infection, study finds 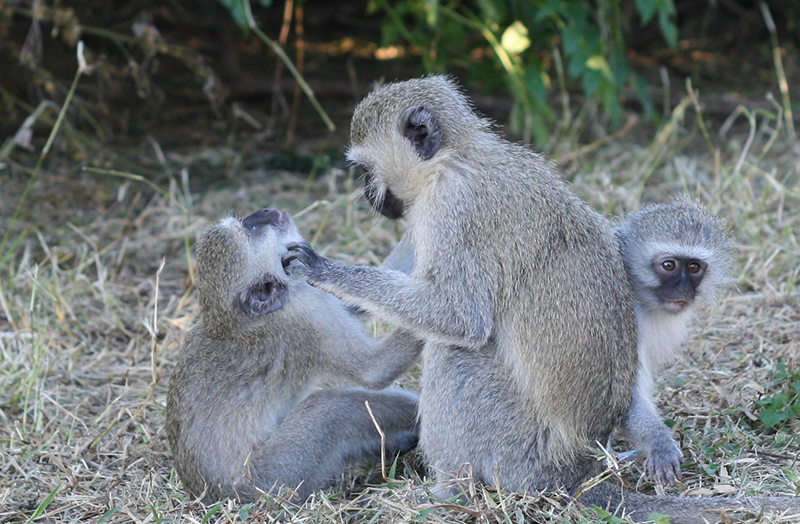 WEST LAFAYETTE, Ind. — Brandi Wren was studying social distancing and infections before masking tape marks appeared on the grocery store floor and plastic barriers went up in the post office.

The team, which included Joseph Camp, professor emeritus in the Department of Comparative Pathobiology; Ian Ray, an ecologist at the University of South Africa and Thomas Gillepsie, an ecologist at Emory University, tracked both the monkeys’ social interactions and their parasite load.

Their results, some of which were published in April in PLOS ONE, showed evidence that monkeys carrying certain gastrointestinal parasites do not groom others as much as those without the parasite, and that routes of transmission may not be as clear-cut as biologists think.

“There are some individuals you watch and you think, ‘Gosh, this guy is such a jerk! He always lets everybody groom him, but he doesn’t groom anybody else!’” Wren said. “What we’re attributing to personality or attitude could just be because he has a gut full of parasites.” 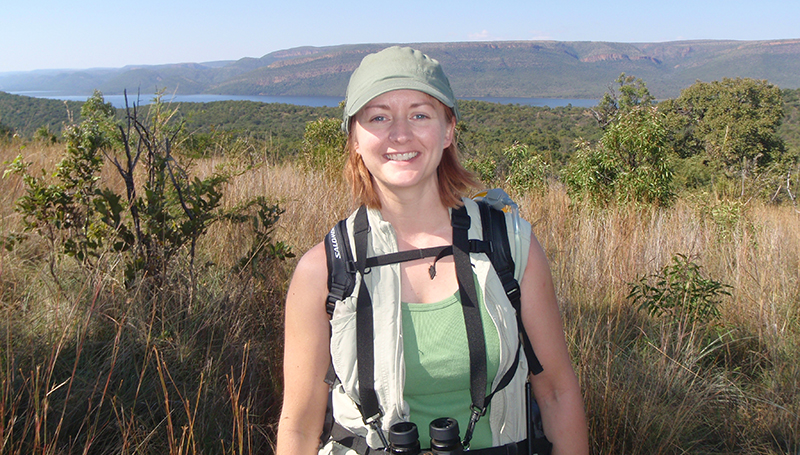 “All these social behaviors affect health on a practical level,” Wren said. “We know COVID-19 is spread through close social contact. A fascinating thing about studying other species, and one reason to observe and understand them, is that we are always learning new things. There is always more to learn. Even when we’re looking at previous research, even when we thought we understood the results, we still may not know the whole picture.”

With implications for both animal behavior and human health, Wren’s results open new avenues for research and new ways to consider old research. Vervet monkeys share surprising similarities with humans. In addition to sharing more than 90% of human DNA — something that is true of all primate species — vervet monkeys have also been known to exhibit conditions more familiar in humans than in other animals, including anxiety and hypertension. Biologists have found that studying vervet monkey physiology, genetics and behavior can shed light on some aspects of human biology.

“We have so many behavioral similarities; the roots and nuances of social behavior tend to be similar across all of the primates, especially from monkeys to humans,” Wren said. “This study shows some of those similarities down to, when we feel sick, we don’t want to talk to anybody. ‘You can rub my back, whatever, but I really want to be left alone.’ We see a lot of similarities in how humans and monkeys interact within their own groups.”

Wild animals typically carry a nominal load of parasites. Biologists have long assumed that many of these infections are mostly innocuous — that they are asymptomatic and don’t significantly affect either the animal’s health or prospects. Even more interesting is that the parasites Wren was studying —whipworm, or Trichuris — are not parasites that are typically spread through social contact. These are gastrointestinal parasites that are usually spread through contaminated soil or substances in the environments. But Wren’s research suggests that they may be spread through social contact and that they can significantly affect an individual’s social behavior and alter group dynamics.

“Infected individuals show a little bit of lethargy, but the interesting thing is that they still let other individuals groom them; they just don’t groom others,” Wren said. “They also don’t cuddle with the other monkeys as much. It appears they just don’t feel well.”

During her dissertation field work, Wren and her team followed three troops of vervet monkeys, Chlorocebus pygerythrus, throughout their range in the Loskop Dam Nature Preserve in South Africa. By exhaustively cataloging individual monkeys’ interactions and grooming habits and by cross-referencing that with infection information from fecal samples, the team was able to disentangle that monkeys infected with whipworm spent less time grooming other monkeys. They accepted grooming — when it was offered — but did not offer to groom their troop-mates back.

Wren notes that this difference in behavior is not so stark that it is noticeable just by observing the monkeys. Only by rigorously observing grooming behavior, exhaustively studying fecal samples and analyzing those results in relation to each other, were they able to decode this relationship. 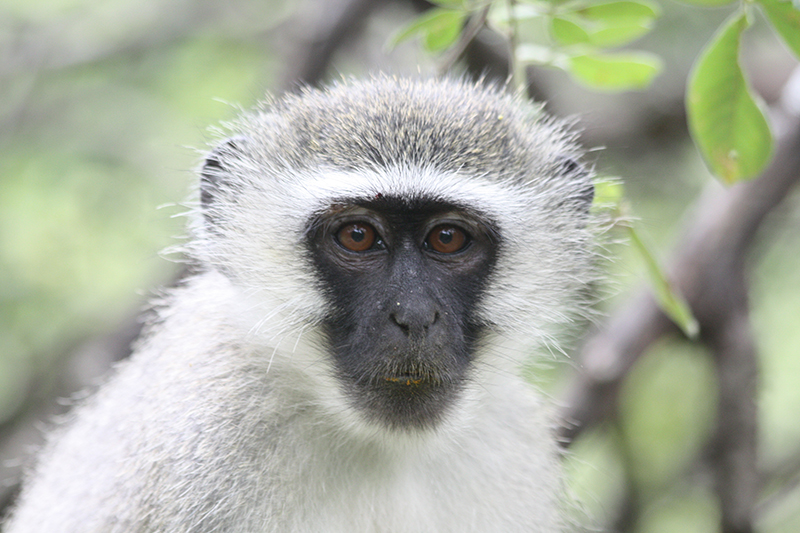 Studying vervet monkeys can help scientists understand human biology. Vervet monkeys share more than 90% of their DNA with humans, and display conditions more familiar in humans than in other animals, including anxiety and hypertension. (Purdue University photo/Brandi Wren) Download image

“There’s no way we would have been able to tell which monkeys were infected just from observation,” Wren said. “There are no other signs of the infection, other than the social behavior. And the change is often so hard to detect. It takes following one individual for a substantial time and collecting the data to see it. The effect is hidden in this complex web of interactions.”

Wren and Remis posit that this discovery is important for animal researchers to bear in mind. As studies of animal personalities begin to gain popularity, Wren stressed the importance of incorporating information like parasite load and hormone profiles into those studies. Otherwise, biologists might misattribute behaviors to personality traits, when really the culprit is an active infection.

“This study shows us that it is important to consider how parasite infections affect energy levels and behavior,” Remis said. “In humans, whipworm is known to cause anemia, chronic dysentery and poor growth. Among the monkeys, these infections may well have resulted in low energy, low levels of interaction or interest in behaviors like social grooming. The study has broad impacts for our efforts to understand the effects of parasites not only on health, but also on behavioral and social interaction with longer-term costs. Low levels of social contact and networking could lead to less integration in social groups. For the monkeys, this could result in fewer allies, lower social rank and poorer access to resources, all of which would further contribute to declining physical condition.”

This research was funded by the LSB Leakey Foundation and the Wennergren Foundation for Anthropological Research. The Department of Anthropology is housed in the College of Liberal Arts.

Social grooming in the animal kingdom is common and serves several functions, from removing ectoparasites to maintaining social bonds between conspecifics. We examined whether time spent grooming with others in a highly social mammal species was associated with infection status for gastrointestinal parasites. Of six parasites detected, one (Trichuris sp.) was associated with social grooming behaviors, but more specifically with direct physical contact with others. Individuals infected with Trichuris sp. spent significantly less time grooming conspecifics than those not infected, and time in direct contact with others was the major predictor of infection status. One model correctly predicted infection status for Trichuris sp. with a reliability of 95.17% overall when the variables used were time spent in direct contact and time spent grooming others. This decrease in time spent grooming and interacting with others is likely a sickness behavior displayed by individuals with less energy or motivation for non-essential behaviors. This study emphasizes the possible links between host behavior and parasitic infections and highlights the need for an understanding of a study population's parasitic infections when attempting to interpret animal behavior.


Note to journalists: For a copy of the paper, please contact Brittany Steff, Purdue News Service, at bsteff@purdue.edu or 765-494-7833. A video, photos, and logos are available via Google Drive. Journalists visiting campus should follow visitor health guidelines.