Purdue has the chemistry lab of the future today, complete with all-digital lab manuals and notebooks 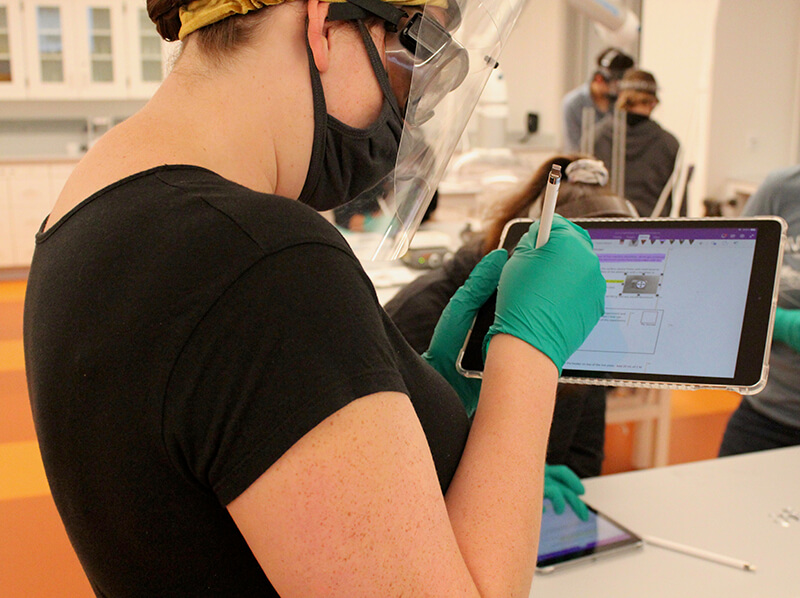 A student works on an iPad in one of the new new all-digital chemistry labs at Purdue’s Chaney-Hale Hall of Science. (Purdue University photo/Greg Kline)

Well before the virus pandemic, Purdue's Department of Chemistry was working on a “next-generation digital learning environment for chemistry.” That it happened to be highly useful in a pandemic is just fortuitous. While the virus accelerated development over the summer, the motive from the start in 2018 was to better apply technology to improve the student learning experience.

A core element of that is the development of a digital lab manual and digital lab notebook, which Purdue chemistry students on campus and online are using for the first time during the fall semester, replacing the traditional paper versions.

In a digital version, the traditional lab manual becomes an interactive multimedia resource and students can use the digital lab notebook to record their observations, calculations and analyses in a similarly rich manner, while also facilitating electronic evaluation and grading by instructors. Material in the lab manual, which sometimes lacked currency in the printed version because of a lengthy production process, can now be updated in real time, said Jonathan Rienstra-Kiracofe, associate professor of chemistry practice, the project’s main architect.

The system, in pilot testing for more than a year before the virus hit, leverages Purdue's license for the Microsoft Office suite, which any student, faculty or staff member can use and install on multiple devices or run in a web browser. The suite of Microsoft applications includes Teams, virtual collaboration software, and OneNote, an online notebook app. Each chemistry class is set up as its own team in Teams, with the relevant lab manual and the lab notebook accessible in OneNote within those teams, Rienstra-Kiracofe said.

In Purdue’s new Chaney-Hale Hall of Science, some introductory and upper-level chemistry students still taking on-campus labs this fall are able to access all that on iPads with added advantages such as capability for electronic note-taking, photo documentation, diagraming with a digital pen or even connecting directly to instruments for data collection. When Purdue’s campus is able to fully reopen, the plan is for all chemistry students to be using iPads for their labs beginning in fall 2021.

“We wanted the new building to be state-of-the-art and give the students the most advanced technology for education we could,” Hrycyna said. “We needed to think about this in a whole new way.”

Among other things, that meant changing the way Purdue had done chemistry labs for half a century, said Stephen Hoffmann, assistant head of the chemistry department.

“This was a chance to really build the lab of the future,” Hoffmann said.

And the lab of the present in industry, where digital data collection, analysis and reporting already are prevalent, giving Purdue students hands-on experience with the way they will be working once they start their careers.

While other schools are doing some similar things, Rienstra-Kiracofe and Hoffmann said Purdue, with thousands of students using it, is unusual in the extent and the scale of its deployment. They said Purdue’s system is a leap forward that could become a model for other lab-heavy science, technology, engineering and math (STEM) fields. It also has piqued interest from both Apple and Microsoft.

Before, instructors prepared the materials for a lab manual, generally as a word-processing document, and sent it off to a publisher who formatted and printed it. The printed copies were shipped to a campus bookstore, where students could purchase the manual (if it was still in stock, supplies sometimes ran short) as well as buy a paper lab notebook. Purdue got a small slice of the sales price, but most of the revenue went to the publisher and bookstore.

With the new digital system, students are paying the same or less, depending on the class, than they did for the paper version and most of the money comes back to Purdue to support ongoing development and improvement of the system and to help provision on-campus labs with iPads.

The project has been a collaborative effort with units across campus working together, including the chemistry department, Purdue’s Chemistry Undergraduate Preparations Laboratory, the Purdue College of Science information technology unit, and Purdue Online, which facilitated a system for students to pay for and receive the digital materials.