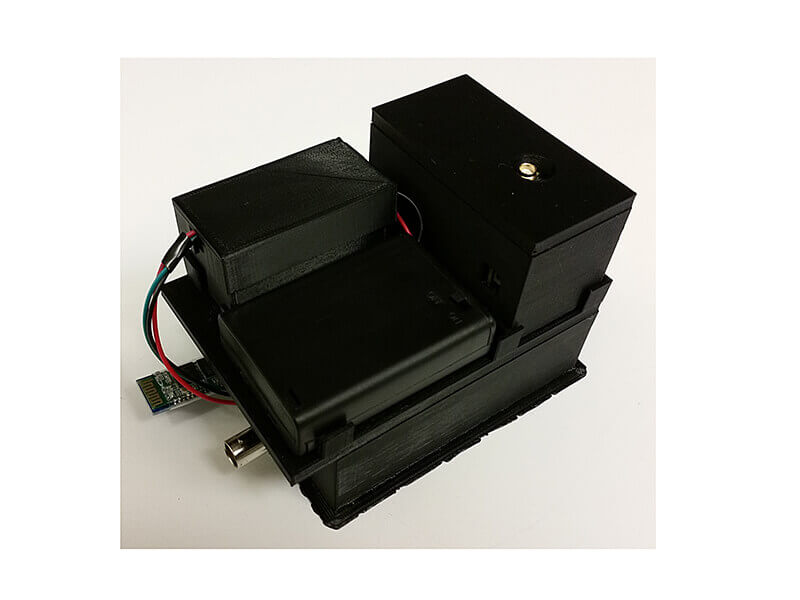 Researchers from Purdue created a portable device that works with smartphones and laptops to do on-site testing for E. coli in food samples. (Image provided) Download image

WEST LAFAYETTE, Ind. – Foodborne illness hits about one in six people in the United States every year. The Centers for Disease Control and Prevention estimates that 48 million people in the U.S. get sick due to one or more of 31 recognized pathogens, including E. coli O157:H7, a particularly harsh strain of E. coli.

Researchers at Purdue University have been working to develop new technologies to help stop the spread of foodborne illnesses, which kill 3,000 people a year, by detecting them more efficiently. They have developed a bioluminescence-based assay coupled with a portable device that works with smartphones and laptops to do on-site testing for harmful E. coli in food samples.

The silicon photomultiplier (SiPM) device uses low light to from the bioluminescent assay to detect the presence of bacteria that cause foodborne illness in food samples. The Purdue team also created an electrical circuit with an amplifier, comparator and micro controller to send the data to laptops and smartphones via Bluetooth technology. They used 3D printing to design a portable cradle for the SiPM. The research is published in the January edition of Applied Optics.

“Our goal is to create technology and a process that allows for the cost-effective detection of the causes of foodborne illness using an easy, expedient and efficient process,” said Euiwon Bae, a senior research scientist of mechanical engineering in Purdue’s College of Engineering, who developed the technology along with Bruce Applegate, a professor of food science in Purdue’s College of Agriculture. “This time frame allows for better integrated detection and quicker action to stop more people from getting sick.”

To show the proof of concept, the Purdue team tested the device with artificially contaminated samples of ground beef from a local grocery store. They injected E. coli into the beef samples and then used their device to analyze the sample within 10 hours of inoculation.

The beef is rinsed and incubated with an enrichment liquid containing a modified phage, a virus for bacteria. The phage then infects harmful foodborne bacteria so that when a substrate is added, the bacteria emit light, which is detected by the SiPM. The device is able to count light pulses or photons.

The special phage used with the smartphone technology was developed by Applegate and is being commercialized by Phicrobe, a Purdue University-affiliated startup founded by Applegate.

The U.S. Department of Agriculture Agricultural Research Service (ARS) and Center for Food Safety Engineering (CFSE) provided funding for the technology research in addition to Hatch Funds, which support agricultural research at land-grant institutions across the U.S.

The innovators are working with the Purdue Research Foundation Office of Technology Commercialization to patent the technology. They are looking for partners. For more information on licensing and other opportunities, contact OTC at otcip@prf.org and mention track code 2016-BAE-67395.

Design and application of a portable luminometer for bioluminescence detection

The silicon photomultiplier (SiPM) for low light detection has many advantages when compared to existing photon counting detectors, such as high sensitivity, low cost, robustness, and compact hardware. To facilitate the use of SiPM as a portable, field deployable device, an electrical circuit was designed consisting of an amplifier, comparator, and microcontroller. In addition, a 3D printing was used to create a portable cradle for housing the SiPM. To evaluate its detection ability, a laser experiment and bioluminescent experiments, including Pseudomonas fluorescens M3A detection, E. coli O157:H7 PhiV10nluc lysogen detection, and a luminescence-based detection of E. coli O157:H7 in ground meat using the engineered luminescent-based reporter phage PhiV10nluc, were conducted. In the same experimental setting, our previously developed smartphone-based luminometer called the bioluminescent-based analyte quantitation by smartphone and a conventional photomultiplier tube-based benchtop luminometer were used to compare detection levels and applicability for supporting luminescent phage-based pathogen detection. Results showed that the SiPM provides better performance in terms of time to detection and SNR and could be used as the light detection component of the PhiV10nluc phage-based detection format.