How are microbes attracted to an oil spill?

Arezoo Ardekani, a Purdue University associate professor of mechanical engineering, has published research that describes the complex hydrodynamics of microorganisms at liquid-liquid and gas-liquid interfaces, showing that microbes may flock to areas where surfactant has been applied.

On April 20, 2010, a catastrophic explosion aboard the Louisiana oil rig Deepwater Horizon caused an underwater wellhead to rupture, discharging oil into the Gulf of Mexico. It took 87 days to cap the underwater well, by which point more than 200 million gallons of oil had discharged into the gulf. Officials used many different tactics to contain the damage of the oil spill, such as relying on microbes to digest hydrocarbons, and using dispersant (or surfactant) chemicals to break up oil slicks, making it easier for the microbes to digest.

“Microbes were the ‘first responders’ to the oil spill,” Ardekani said. “They remediated a significant amount of hydrocarbons. But the Gulf of Mexico is a big place. How did so many microbes find this oil?”

As Ardekani discovered, the performance of the microbes was affected by the surfactant, but not how anyone expected.

“There are several things that cause microorganisms to move,” she said. “For example, the microbes near an oil spill may be motivated by chemotaxis, i.e., picking up the chemical trail of a potential food source. But the surfactant actually created a hydrodynamic phenomenon that caused microbes to gather in even greater numbers.”

Ardekani’s team tested its hypothesis in the lab, using E. coli cells, single-celled bacteria, whose behavior is well-known. The researchers 3D-printed a small chamber, where they could microscopically observe the cells’ movements in a liquid suspension, and then tested what happened when that liquid came into contact with another liquid of different viscosity. The results showed that the E. coli cells accumulated at higher density at the liquid-liquid interfaces, and even greater density at gas-liquid interfaces. 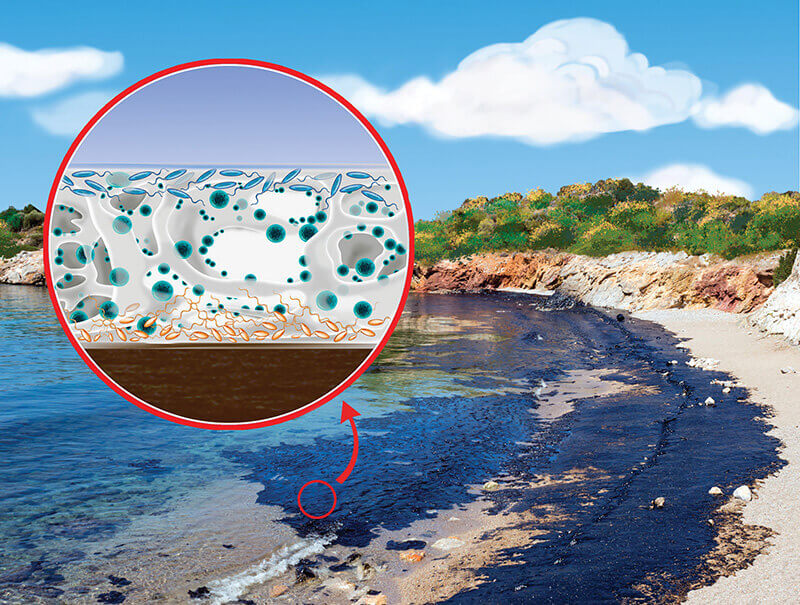 “Those surfactants changed the interface property,” Ardekani said. “If microbes are hydrodynamically attracted to gas-liquid interfaces, the presence of surfactants made it even more attractive.”

Using this experiment as a guide, researchers built theoretical models that successfully explained the complex fluid dynamics at these gas-liquid interfaces. Their research has been featured on the cover of the journal Soft Matter and published in the journal Physical Review E. A YouTube video is available at https://youtu.be/nLPVXmWxqj8.

The use of dispersants during the Deepwater Horizon oil spill was not without controversy; Scientists disagreed on whether the chemicals did more harm than good for the ecosystem. In the aftermath of the disaster, BP spent $500 million to establish the Gulf of Mexico Research Initiative, an independent organization that funds thorough scientific research in mitigating the effects of the spill. Ardekani’s research is one of the results of that effort.

“We didn’t know any of this before the spill,” Ardekani said.  “The main reason they used dispersants was to break up the size of the oil droplets. But now we have discovered a new hydrodynamic mechanism, that adding surfactant causes microbes to spend more time near oil droplets. That, combined with chemotaxis, may potentially give microbes more time to decompose these hydrocarbons.”

Note to Journalists: A YouTube video is available at https://youtu.be/nLPVXmWxqj8.

Near an interface, the distribution of swimming microorganisms such as bacteria is distinguished from inert colloidal particles because of the interfacial hydrodynamics induced by swimming. In this work, we use nontumbling flagellated bacteria, Escherichia coli, to study cell distribution near gas and liquid interfaces and compare it to the case of a solid wall. For low-viscosity ratios such as gas interfaces, we observe a stronger cell accumulation compared to that near liquid and solid surfaces. This contradicts known theoretical predictions. Therefore, we develop a model based on Brownian dynamics, including hydrodynamic effects and short-range physiochemical interactions between bacteria and interfaces. This model explains our experimental findings and can predict cell distribution near clean and surfactant-contaminated interfaces. By considering higher order singularities, this study helps explain bacteria orientation, trajectories, and cell density.

This work is partially supported by grants from the Gulf of Mexico Research Initiative and the National Science Foundation CBET-1604423 and CBET-1700961. This work used the Extreme Science and Engineering Discovery Environment (XSEDE), which is supported by National Science Foundation Grants No. CTS190041 and No. CTS190055. Data are publicly available through the Gulf of Mexico Research Initiative Information & Data Cooperative (GRIIDC) at https://data.gulfresearchinitiative.org

Cellular motility is a key function guiding microbial adhesion to interfaces, which is the first step in the formation of biofilms. The close association of biofilms and bioremediation has prompted extensive research aimed at comprehending the physics of microbial locomotion near interfaces. We study the dynamics and statistics of microorganisms in a ‘floating biofilm’, i.e., a confinement with an air–liquid interface on one side and a liquid–liquid interface on the other. We use a very general mathematical model, based on a multipole representation and probabilistic simulations, to ascertain the spatial distribution of microorganisms in films of different viscosities. Our results reveal that microorganisms can be distributed symmetrically or asymmetrically across the height of the film, depending on their morphology and the ratio of the film's viscosity to that of the fluid substrate. Long-flagellated, elongated bacteria exhibit stable swimming parallel to the liquid–liquid interface when the bacterial film is less viscous than the underlying fluid. Bacteria with shorter flagella on the other hand, swim away from the liquid–liquid interface and accumulate at the free surface. We also analyze microorganism dynamics in a flowing film and show how a microorganism's ability to resist ‘flow-induced-erosion’ from interfaces is affected by its elongation and mode of propulsion. Our study generalizes past efforts on understanding microorganism dynamics under confinement by interfaces and provides key insights on biofilm initiation at liquid–liquid interfaces.

This research was made possible by grants from the Gulf of Mexico Research Initiative and the National Science Foundation (Grant No. 1700961 and 1604423). This work used the Extreme Science and Engineering Discovery Environment (XSEDE), which is supported by the National Science Foundation grant number ACI- 1548562 through allocations TG-CTS180066 and TG-CTS190041. Data are publicly available through the Gulf of Mexico Research Initiative Information & Data Cooperative (GRIIDC) at https://data.gulfresearchinitiative.org