Purdue scientists show how soybeans may get more nitrogen from atmosphere 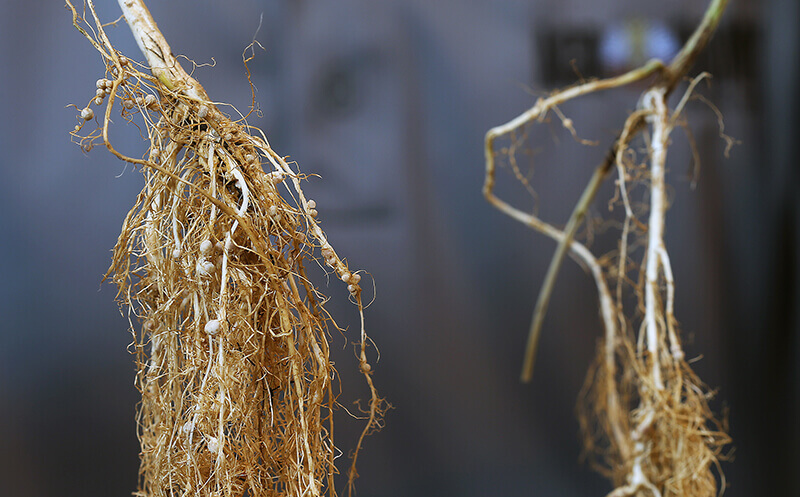 WEST LAFAYETTE, Ind. – Plant breeders could theoretically increase soybean crop yields if they could control the number of nodules on plant roots since they are responsible for fixing atmospheric nitrogen. Increased crop yield is key to feeding a global population expected to surpass 9 billion people by 2050.

In today’s issue of the journal Science, Jianxin Ma, a professor in Purdue University’s Department of Agronomy, and colleagues report a potential method for increasing nodule formation based on discoveries tied to the RNA in rhizobia, soil-borne bacteria essential to root nodule formation. They describe how rhizobia hijack soybean genes that would otherwise suppress nodule formation.

The findings offer scientists genetic targets for new soybean lines that could get even more of their necessary nitrogen from the atmosphere. 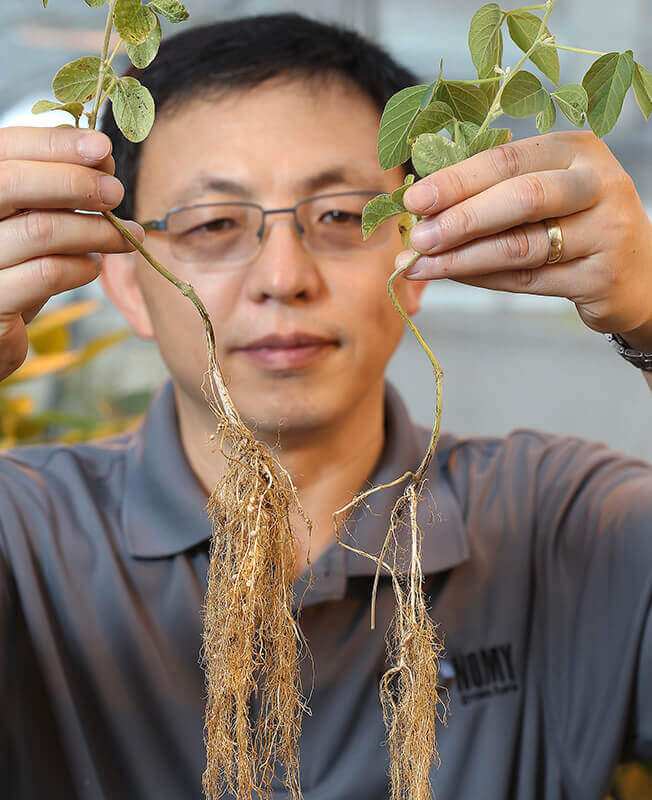 “People tend to add fertilizer nitrogen to increase soybean yield, but that is not an economical solution because the fertilizer represses nodule formation. To increase the plant’s yield potential, it is important to increase the efficiencies of nodulation and nitrogen fixation,” Ma said. “We’ve demonstrated that rhizobia can produce small RNAs to interfere with the function of soybean genes. Controlling these processes could increase the amount of atmospheric nitrogen a legume could fix and improve yields.”

“Small RNAs chop the messenger RNAs (mRNAs) that carry the codes from those soybean genes, and as a result the capability of the genes to generate functional products (i.e., proteins) is reduced or turned off,” Ma said.

These small RNAs are produced from a few transfer RNAs (tRNAs) in rhizobia. Typically, tRNAs help decode an mRNA sequence into a protein. These rhizobial tRNAs produce short RNA chains that hijack the soybean genes, representing a novel function of tRNAs.

By taking advantage of these findings, plant breeders could develop soybeans and other legumes that can fix more atmospheric nitrogen. That could lead to higher yields and minimize the amount of fertilizer nitrogen that needs to be added to a field. Ma has filed a provisional patent for the genetic technology associated with the discovery.

“For the first time, we’ve demonstrated the function of bacterial small RNAs in cross-kingdom communication,” Ma said. “This may spur new research toward the understanding of widespread symbiotic relationships such as that between bacteria and the human digestive system.”

The Agriculture and Food Research Initiative of the U.S. Department of Agriculture’s National Institute of Food and Agriculture, the Purdue AgSEED program, the North Central Soybean Research Program and Indiana Soybean Alliance supported this research.

Rhizobial infection and root nodule formation in legumes requires recognition of signal molecules produced by the bacteria and their hosts. Here we show that rhizobial tRNA-derived small RNA fragments (tRFs) are signal molecules that modulate host nodulation. Three families of rhizobial tRFs were confirmed to regulate host genes associated with nodule initiation and development via hijacking the host RNAi machinery that involves ARGONAUTE 1. Silencing individual tRFs with the use of short tandem target mimics or by overexpressing their targets represses root hair curling and nodule formation, whereas repressing these targets with artificial miRNAs identical to the respective tRFs or mutating these targets with CRISPR-Cas9 promotes nodulation. Our findings thus uncover a bacterial small RNA-mediated mechanism for prokaryote-eukaryote interaction and may pave the way for enhancing nodulation efficiency in legumes.