New technology targets cancer, other diseases, and hidden elements that allow those diseases to thrive 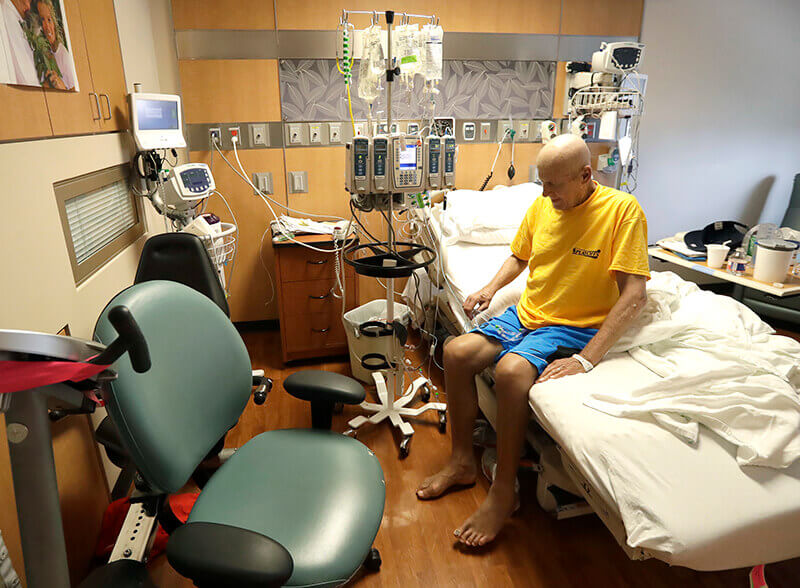 A Purdue-affiliated startup is developing a platform aimed at treating relapse patients for cancers and other diseases. KinaRx has licensed through the Purdue Research Foundation Office of Technology Commercialization a series of drug compounds that have shown promise in treating patients who have a recurrence of acute myeloid leukemia. Longtime NBA sideline reporter Craig Sager was diagnosed with AML in 2014, went into remission twice for several months after receiving bone marrow transplants. This photo shows him in a Houston hospital where he underwent a third bone marrow transplant. (Associated Press Photo/David J. Phillip) Download image

WEST LAFAYETTE, Ind. – A Purdue University-affiliated startup has created a platform aimed at treating relapse patients for cancers and other diseases by taking a holistic approach of not only seeking to impede the main cause but also to stop other elements that help that disease thrive.

KinaRx LLC has developed a platform that makes complex drug molecules rapidly using bioinformatics, multi-component compound synthesis and the understanding of disease biology. The platform was created in the lab of Herman O. Sintim, the Drug Discovery Professor of Chemistry in Purdue’s Department of Chemistry.

“Research has shown that many diseases are not driven by only one target,” Sintim said. “Diseases are complex. Until you tackle the main drivers and the underlying issues, it’s going to be difficult to cure diseases. So what KinaRx is doing is developing drugs that hit not only the main disease drivers but also the collaborative players that allow the disease to progress.”

KinaRx was founded by Sintim, its chief scientific officer, along with M. Javad Aman, Rena Lapidus, Ashkan Emadi, Frederick Holtsberg and Joe O’Neill. It is based in Rockville, Maryland.

Sintim said that the KinaRx platform finds compounds that selectively target a network without being toxic. 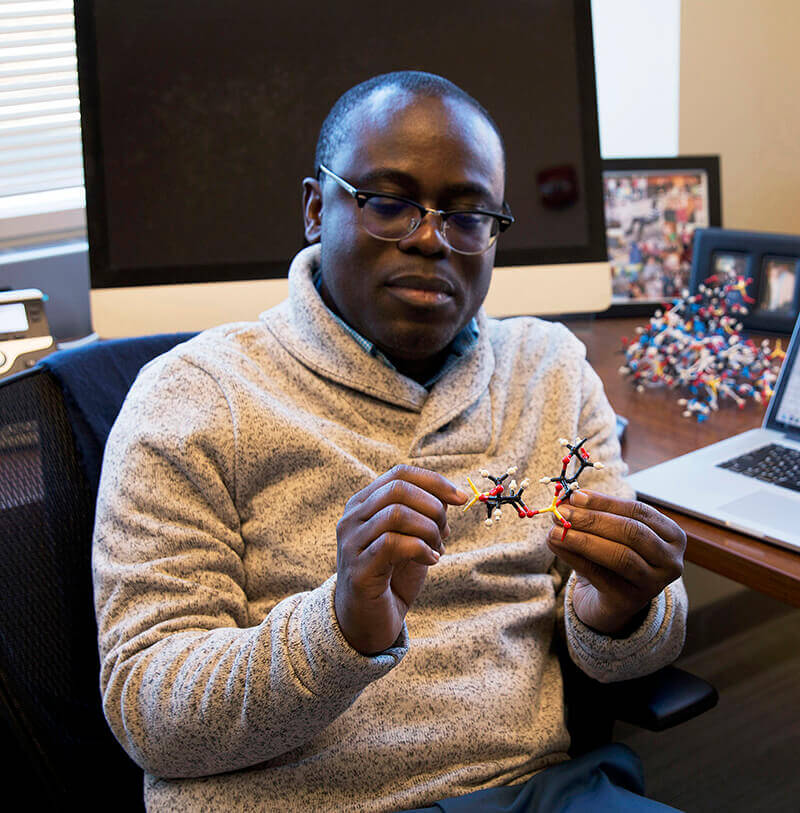 “Finding compounds that can simultaneously inhibit ‘collaborating’ proteins in attacking diseases is an important attribute to this technology,” he said.

KinaRx has licensed through the Purdue Research Foundation Office of Technology Commercialization a series of drug compounds that have shown promise in treating patients who have a recurrence of acute myeloid leukemia (AML), an aggressive blood cancer that is one of the most lethal cancers. About 19,520 news cases are diagnosed a year, and about 10,670 people a year die from it, according to the American Cancer Society.

About 30 percent of AML patients have a mutation caused by a kinase called FLT3, which makes the leukemia more aggressive. Although a few FLT3 inhibitors have already been approved in the clinic, patients can relapse due to mutations in the FLT3 protein, which cause drug resistance. Researchers in Sintim’s lab have developed a series of new compounds that inhibit mutant FLT3 kinases. In mice models of drug-resistant AML, the KinaRx compounds performed better than gilteritinib and quizartinib (two FLT3 inhibitors that have been approved or undergone clinical trials). It is anticipated that these compounds will have superior performance against AML compared with the standard treatment.

KinaRx also is working on a treatment for a form of lung cancer with mutation in the RET kinase, which is found in about 2 percent of patients. In addition to FLT3 and RET, KinaRx is also developing therapeutics based on the inhibition of many other kinases, such as ROCK1 and 2, MNK2, Cyclin-dependent kinases, EphA2, TrkA, B or C, CLK1-4, Haspin, TOPK/PBK, p70S6K, CSF1R and many other kinase targets. KinaRx is also looking at other cancers and other diseases caused by inflammation.

Sintim believes that kinases, which KinaRx derives its name from, are important to curing diseases. There are more than 500 kinases in a cell, and kinases are the second most important drug target behind G-protein-coupled receptors, or GPCRs.

“Kinases basically signal so many processes in a cell. So they are drug targets for many diseases,” Sintim said. “We have developed a technology that is so powerful that we will be able to target many diseases associated with kinases.”

KinaRx has applied for grants and is looking for investors as it continues to develop the platform.