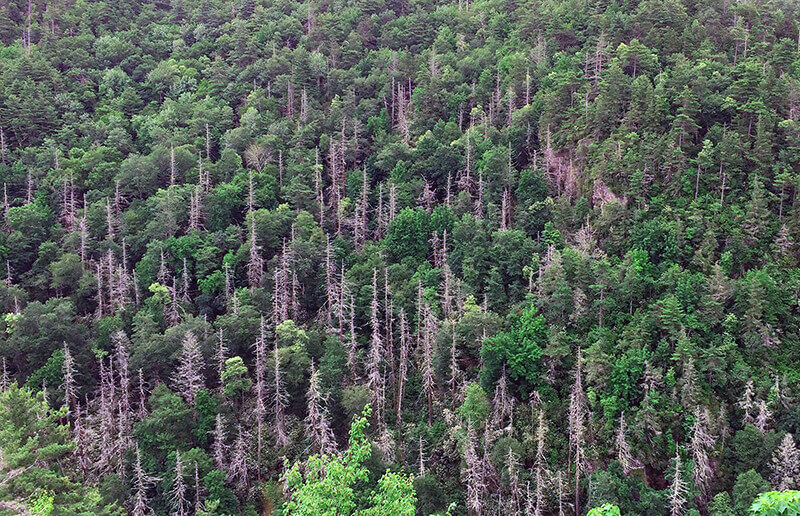 WEST LAFAYETTE, Ind. – Invasive insects and pathogens have wreaked havoc on ash, elm, chestnut trees and others, wiping some of them almost completely from American forests. In addition to the ecological impact, a Purdue University study shows that the carbon storage lost to these pests each year is the same as the amount of carbon emitted by 5 million vehicles.

Songlin Fei, a professor in the Department of Forestry and Natural Resources, said the trees killed each year by the 15 most invasive pests contain 5.53 teragrams of carbon (TgC), equivalent to about 6 million U.S. tons. His findings were published Monday (Aug. 12) in the Proceedings of the National Academy of Sciences.

“Not all of those dead trees immediately become carbon sources, but they are being taken away from the live biomass, which functions as carbon sink. Part of the dead biomass will eventually get into the atmosphere,” Fei said.

The losses are especially concerning as some have suggested forest carbon sequestration might fight climate change by capturing and retaining more of the carbon from the atmosphere. Fei said losses due to invasive species could damage those hopes. 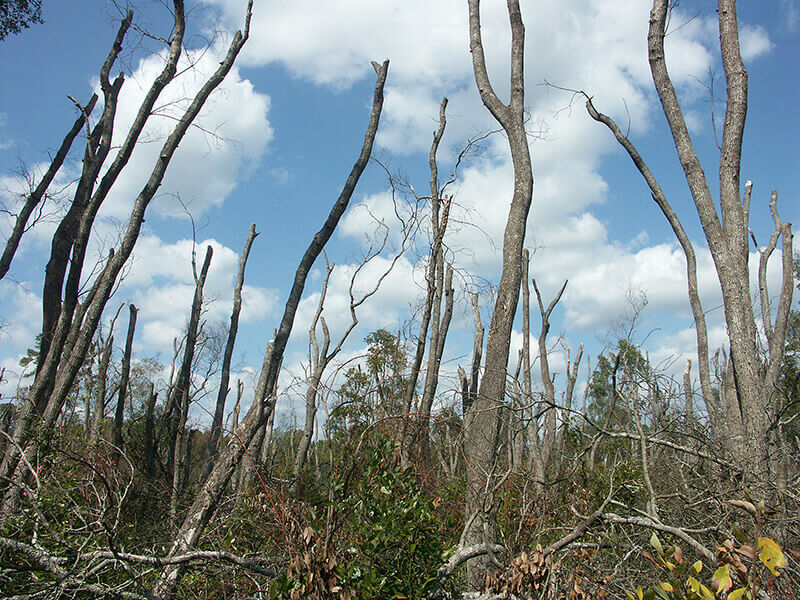 “If we are thinking of forests as a tool to mitigate climate change, the tool itself is being challenged by these invasive pests,” Fei said. “Not only is the tool damaged, but also it’s becoming an impediment.”

Fei and colleagues from the U.S. Forest Service analyzed 10 years of forest surveys covering 93,000 field plots in the contiguous United States. They measured tree loss due to invasive pests – above and beyond natural tree deaths – for the most harmful pathogens and insects tracked by the Forest Service.

Of the 15 invasive pests in the study, nine are pathogens, four are sap-feeders, one is a wood-borer and one is a foliage-feeder. The most damaging pests, in terms of biomass loss above what would be expected from natural losses, were the emerald ash borer, Dutch elm disease, beech bark disease, and hemlock woolly adelgid. The most damaging species for mortality rate, as measured in percent of the biomass loss, were laurel wilt disease (11.4 percent), chestnut blight (6.3 percent), and butternut canker (5 percent).

The study authors said that while the current annual loss from invasives is only 0.04 percent of the total live biomass in the contiguous U.S., the problem could grow. Of the 15 pests, three have invaded only about half of their potential range and seven have invaded less than 35 percent.

“While the total biomass losses reported here are only a relatively a small percentage of the total biomass, it is important to emphasize that the trajectory of future impacts of these pests can be anticipated to increase, as most of the damaging pests analyzed here have not invaded the full ranges of their hosts,” they wrote. “Given the continued range expansion of existing pests and the anticipated establishment of new nonnative pests in the future, proactive policies aimed at mitigating future invasions are likely to yield secondary benefits of reducing greenhouse gas emissions.”

The researchers also caution that their estimates are certainly low because they did not include losses from urban areas. They have also not included hundreds of other pests that inhibit tree growth and development of root systems that can hold significant amounts of carbon.

The researchers plan to work on determining the amount of the carbon from dying trees that is returned to the atmosphere and the amount captured by soil. The National Science Foundation and the U.S. Department of Agriculture funded this work.

Biomass losses resulting from insect and disease invasions in US forests

Worldwide, forests are increasingly affected by nonnative insects and diseases, some of which cause substantial tree mortality. Forests in the United States have been invaded by a particularly large number (>450) of tree-feeding pest species. While information exists about the ecological impacts of certain pests, regionwide assessments of the composite ecosystem impacts of all species are limited. Here we analyze 92,978 forest plots distributed across the conterminous United States to estimate biomass loss associated with elevated mortality rates caused by the 15 most damaging nonnative forest pests. We find that these species combined caused an additional (i.e., above background levels) tree mortality rate of 5.53 TgC per year. Compensation, in the form of increased growth and recruitment of nonhost species, was not detectable when measured across entire invaded ranges but does occur several decades following pest invasions. In addition, 41.1% of the total live forest biomass in the conterminous United States is at risk of future loss from these 15 pests. These results indicate that forest pest invasions, driven primarily by globalization, represent a huge risk to US forests and have significant impacts on carbon dynamics.