Do you have a picture with Purdue’s Neil Armstrong statue? Purdue wants to see it 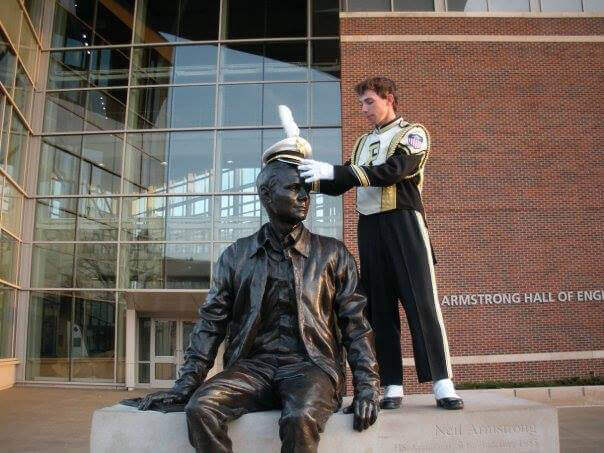 Friends who are Purdue graduates and others who have taken prospective Boilermakers on visits send Fagan photographs of the statue. He’s seen others on social Cutlines: The statue of Purdue’s famous alum and the first man on the moon, is in front of Neil Armstrong Hall of Engineering, and a popular place for people to snap photos. Purdue is asking people to share their Armstrong statute photos on Twitter, Facebook and Instagram, and, use the hashtag #TakeGiantLeaps. Purdue will share these images during the week leading up to Thursday-Saturday (July 18-20). Apollo 11 celebration. (Image provided to Purdue’s School of Aeronautics and Astronautics) Download image

WEST LAFAYETTE, Ind. — It’s become routine during commencement weekends for students, families and friends to line up on Stadium Avenue to snap photos with the Neil Armstrong statue. Same on football game days, Spring Fest or any visit to campus. You’ve probably seen TV broadcasts of Purdue athletic events break for commercial with a well-lit shot of the statue framed by moonlight.

The Armstrong statue has become the ultimate landing spot.

The statue of Purdue’s famous alum and the first man on the moon is in front of Neil Armstrong Hall of Engineering. Purdue is asking people to share their Armstrong statue photos on Twitter, Facebook and Instagram, and, use the hashtag #TakeGiantLeaps. Purdue will share these images during the week leading up to the events taking place Thursday-Saturday (July 18-20) to commemorate when Armstrong set foot on the moon July 20, 1969, and said, “That’s one small step for a man, one giant leap for mankind.” Armstrong’s historic moment is the theme for Purdue’s Giant Leaps Sesquicentennial Campaign. The 150th anniversary celebration of Purdue will conclude with an astronaut reunion at homecoming on Oct. 12.

Here is the story of how the Armstrong statue was created

Chas Fagan, a nationally renowned artist, was selected to create the statue more than a decade ago. Though in every project he tries to think ahead to the impact it could have — “If I were a visitor, what would I want? What would be cool?” — he called the response to this particular project “amazing.” When told lines form at Purdue Commencement for students to capture their special moment with the statue, Fagan says it left him humbled. 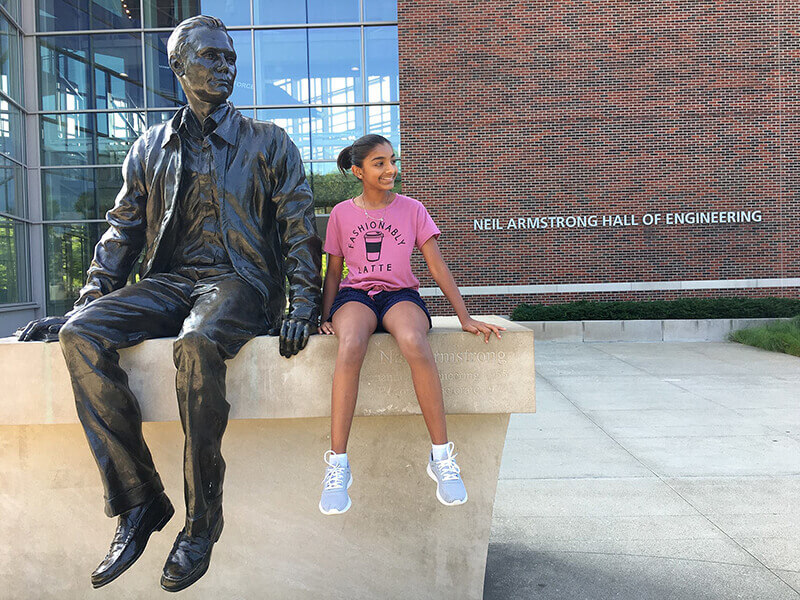 Neil Armstrong Hall of Engineering is home to the statue of the first man to walk on the moon and this Purdue alumnus. (Image provided to Purdue’s School of Aeronautics and Astronautics) Download image

But he’s not necessarily surprised at the statue’s popularity.

“I envisioned people hanging out. It’d be a place to meet people. It’d be a place to have your lunch or study, in the sun, because the stone is warm. I just thought it’d be a great spot,” Fagan says. “Within a short time, I was told that was happening, so once that happened, I thought, ‘This is great. Mission accomplished.’

“But beyond that, where he’s become this wonderful icon, that’s his doing. Statues kind of take on a life of their own, and he has.”

When Fagan first learned in 2006 that Purdue planned to commission a statue to honor Armstrong, he quickly brainstormed ideas of what the piece could be.

How could he not push hard to be awarded the project?

“One of my first memories in my life was a moment of serious commotion in my house, being picked up and plunked in front of the TV and watching that grainy video,” Fagan says of the 1969 moon landing. “I was one of those little kids fascinated by what was happening on TV and knowing that there were Americans on the moon. So I’ve always been a fan of Neil Armstrong.”

Fagan’s concept for the statue, though, was not to feature Armstrong as an iconic astronaut, adorned in a NASA suit with moon boots, unabashedly celebrating one of the country’s greatest achievements. Instead, Fagan wanted to showcase Armstrong as an undergraduate Purdue student in the 1950s, complete with penny loafers, windbreaker, books and slide rule. Fagan wanted students to be able to relate to Armstrong, not be intimidated.

Fagan’s proposal to Purdue included paintings of what the piece could look like and, based on architectural designs of the new 210,000-square-foot engineering building, where he’d place the statue. He also offered a unique feature in the lawn around Kirk Plaza: Concrete imprints of moon boots trailing away from the plinth, spaced apart to replicate bounding steps in microgravity on the lunar surface.

“I think the message it gives is just wonderful that you can walk in his footsteps as he did or that he’s looking away, looking at his future footsteps,” Fagan says. “It has all the right storytelling ability.”

The pitch touched all the right notes, and Fagan was granted the commission. 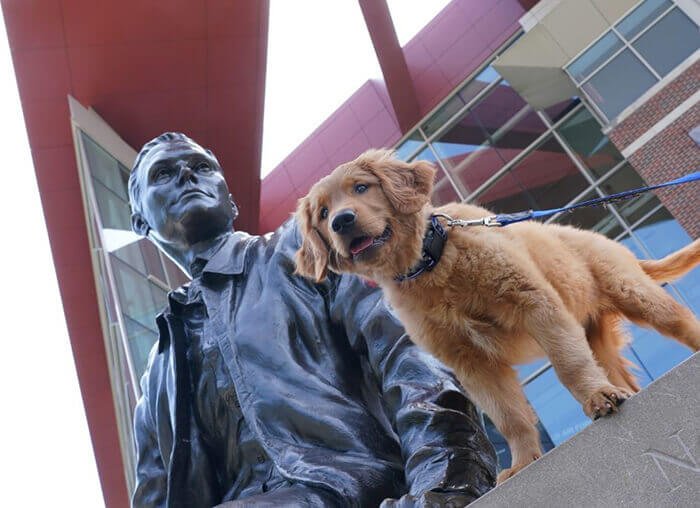 Chas Fagan, a nationally renowned artist, was selected to create the Armstrong statue that is popularly photographed when people visit campus. (Image provided to Purdue’s School of Aeronautics and Astronautics) Download image

“The first instant is absolute joy, and the next moment is, ‘Oh my gosh, I need to come up with something good,’” Fagan says, laughing, recalling the moment.

It took about a year to complete the bronze sculpture, an 8-foot-tall, 125-percent-scale likeness of Armstrong.

And there certainly were challenges along the way. But even those produced memorable moments.

That idea for the moon boots? Someone from Purdue asked Fagan how he was going to reproduce them. Fagan said he’d have to study a photograph, make a copy, sculpt it and then make it in stone. That response wasn’t received with much enthusiasm, Fagan says now laughing, but then someone piped up and asked, “Why don’t you use a real moon boot?”

“I quickly realized, there’s normal, and then there’s Purdue,” Fagan says. “The thought is, ‘Well, why not just shoot for the moon?’ I had nothing to do with it, but it was all arranged for me by Purdue to go to a government storage facility and take a mold off a real moon boot.”

Another potential issue was how high to make the base, made of limestone from Indiana. Fagan made a hard pitch for a specific height of the plinth.

“Trying to make it seem high and tall without being unreachable so if you really wanted to get up there, you could. But not so high that it’s so dangerous,” he says. “There’s this happy medium that we made because my goal was to have students hop up and join him seated there on the stone.”

Armstrong heard that Fagan was looking for photos of him as a younger man so Fagan could make a model closer to what Armstrong looked like in college and garner insight into what kind of notebooks and tools he may have carried. Fagan didn’t personally share that, though. Still, one day “out of the blue,” Fagan says, a FedEx box arrived at Fagan’s house. After opening the box, Fagan saw the top filled with photographs of Armstrong as a boy, as a teenager. Fagan noticed the corners on some of the photos still had little black adhesives, like they were pulled out of an album. At the bottom of the box were notebooks, including a spiral one that had a logo embossed on it with the school’s mascot.

“I thought, ‘This is just perfect.’ Then I pull it out and look at it, and it’s got his name on it,” Fagan says. “It’s his physics notebook. Oh my gosh. I quickly just photographed everything, every angle, put it right back in the box and sent it right back. There’s no way that archival, valuable treasure would hang out in my studio.

“That was a very generous thing to do.”

The biggest challenge, though, was actually one of Armstrong’s features. Fagan had viewed a lot of photos from NASA and even some of Armstrong’s childhood photos to try to get a firm handle on Armstrong’s profile. But none of the pictures gave him a good enough idea to model.

Armstrong agreed to meet in Washington, D.C., while he was in town for a conference. They met in a windowless little dining room at a large hotel, Fagan remembers.

“It was just absolutely a dream come true for me,” Fagan says. “He was really generous with his time.”

Fagan eventually did spill to Armstrong his moon-landing-moment story, watching on the TV when he was a kid, but it was only because Armstrong’s inviting personality allowed Fagan to feel so comfortable around his boyhood hero.

Fagan saw Armstrong again, on Oct. 27, 2007, when Armstrong attended the dedication of the Neil Armstrong Hall of Engineering, the day after the statue was unveiled. Fagan was seated in front of the statue, a vantage point that allowed him to see Armstrong’s first reaction. When Armstrong came out of the building and around the corner to where the statue was, he paused, took a breath, touched it, smirked, and moved on, Fagan says.

“It was great,” says Fagan, laughing.

After the building dedication, after Armstrong spoke, after the celebration with a group of astronauts, the crowd dispersed, Fagan with it.

Fagan had forgotten one thing: To take a photo with the statue.

Fortunately, he has seen plenty of others.

The original story by Stacy Clardie appeared online for Purdue’s School of Aeronautics and Astronautics.